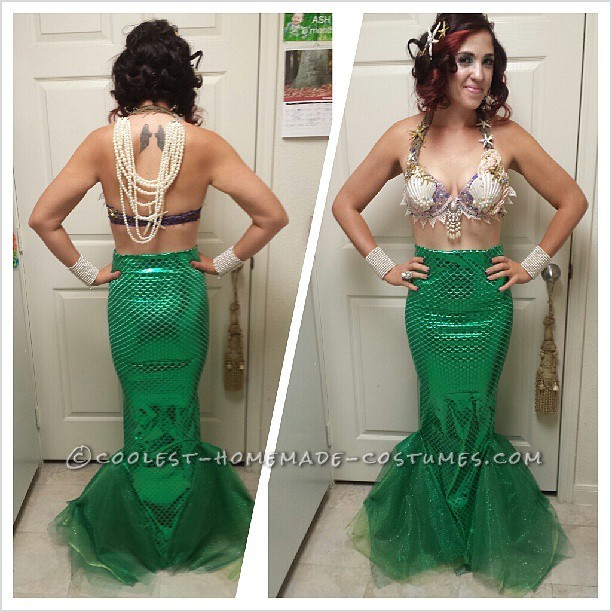 My husband and I love to dress up and go trick-or-treating with our 14 month old (isn’t that why we have kids?) and we love to find ways to make them all work with each other. This year, we decided on my husband and son to be pirates and myself to be a mermaid. I was very excited. I had just recently lost 90 pounds after giving birth to my son, and this Halloween was going to be my year to feel comfortable in a costume. I could not wait to get started on my ultra feminine and fun homemade Mermaid costume.

In August, I went to Joann’s Fabrics and I bought the scale fabric for the skirt. It was already on sale 30%, but if it wasn’t I would recommend using an online coupon for 40%. I bought 2 yards, I believe for $9 or so. I then found a push up bra in a purple jewel tone and I bought some shells from Hobby Lobby. They come in a 3 pack for I believe $3.99, which is good in case you mess up, you have an extra. Along with that, I bought a little basket of starfish ($3.99), and some half back pearls ($2.99). I got some of this on sale and then I would use a 40% online coupon that you show on your phone for the highest price item that was not originally on sale. I try to make my costumes in the most cost effective way as possible.

So I had all of these supplies and I really had no idea where to start. I decided to play with the top first because I still had not figured out a game plan for attacking my tail. I took the two shells and had my husband drill tiny holes into it so I would later be able to sew them onto the bra. I then painted them a pearlescent white color and applied to it some glitter from a pack of glitter glue pens I bought of varying colors ($4.99). After it had dried, I put the bra on and figured out the exact positions I wanted the shells to lay and drew on little marks so I would know where to sew them on. After they were sewed on, I painted some of the starfish gold and some of them the same color I painted the shells. I also applied glitter to them so they would sparkle in the light. I used E6000 glue to apply them to the bra in an overlapping pattern starting from the top of the right shell to where the bra strap met the bra.

I applied rhinestones/ and or half back pearls to the center of some of the starfish as well to add some more character. I found a vintage belt in my closet that I never wore and sewed that onto the left side of the bra above the shell and curved it around. I liked that it felt feminine yet still nautical. I took another trip back to Hobby Lobby and I bought a pack of lace headbands ($2.99), netting ($5.99), and trim ($2.00). I used one of the lace headbands, cut it in half and sewed them under the shells while following the shape of the bra. This added some texture and a different color to give some more depth. I did not like the straps on the bra the way they were so I cut them off and and turned it into a halter top with the netting.

I also sewed on some of the netting to the back of the bra so it wouldn’t look so “bra-like”. I took the trim and sewed it around the bottom edges of the cup for more delicate. I then glued on the half-back pearls and some rhinestones all over the shells and bra itself. I found an old earring that had a lot of pearls on it and I used that in the center at the bottom of the bra. I used a pearl necklace with varying lengths and I pinned that to the back of the halter so I would have cascading pearls on by back instead of it being completely open. I also used leftover starfish and glued them to hair pins so I could pin them on the netting and in my hair on the day of. That completed the top. It took me forever it seemed like to figure out an easy way to make the tail (I am in no way a seamstress).

I decided that I wanted my tail to be high-waisted because I did not want to be showing so much skin at one time. The fabric I bought, I found to be pretty stretchy so I measured my waist where I wanted the top to be and I cut that measurement width wise on the fabric. I then hand sewed it inside out almost all the way to the bottom, you want to leave about a foot open so you can sew on the fin later on. Once I had that sewn, I then layed it down flat so the seam was on my left side and I then cut a slit on the right side to match the opening I had left on the left side. I really wanted it to look like a fin in the end so I cut both the front and back panels to make a point (like a downward facing arrow).

I went to Joann’s Fabrics to buy the tulle last. I bought 3 kinds. The first one I bought was the cheapest in a dark green color and I  bought 2 yards of that so it would add some fluff to it. I then bought two kinds of shiny, glitter tulle; one in a dark green and the other in a lighter green to add depth. I bought just 1 yard of each of these (make sure to use the 40% coupon!). I went home and layed them all on top of each other and cut them hotdog style so you had two pieces of each, one for each fin.  I then hand pinned and sewed it onto the outside of the bottom of the tail and then pinned a little point on the edge of the fin to make sure it would stay pointed outward. It worked perfect. Just as I had hoped. I was so relieved.

The day came to go trick or treating and we had so much fun! We got stopped so many times and were asked if they could take our pictures. I got some great reactions from the kids as well as the parents, men and women alike. Although, I did get some mean looks from some of the wives because their husbands were enjoying my outfit a little too much. This was definitely a new experience for me after losing so much weight, but it was great. I did not feel like I was over exposing myself or it was an outfit that my son would be embarressed to see pictures of me in when he is older.

I have always enjoyed and dreamed of being a mermaid, and for one night I got to live my fantasy and at a great low price while feeling good in fabric that isn’t cheap like the storemade ones you always see for sale. Isn’t that what Halloween is all about anyway? Oh, that and the candy of course, especially since my son is still too young to have any this year. Yea for mom and dad! 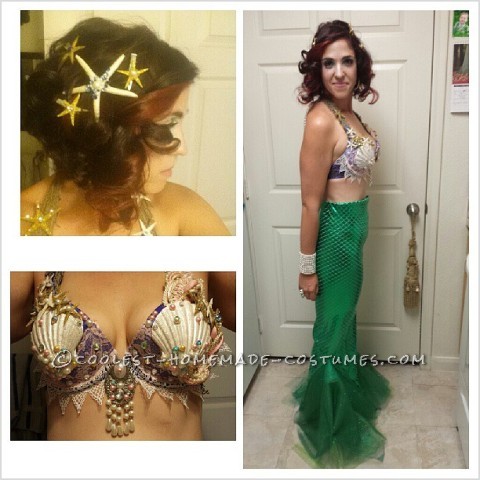 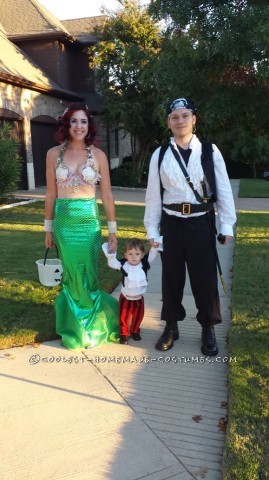 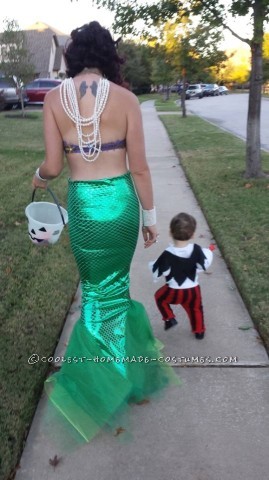 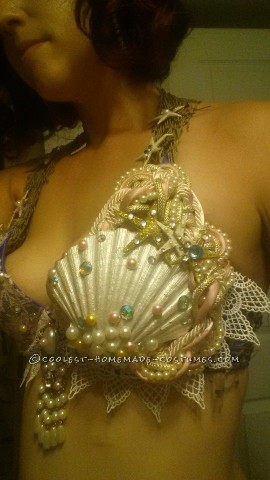 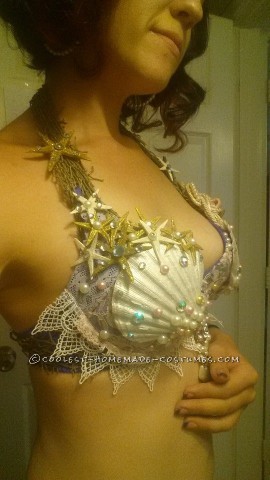