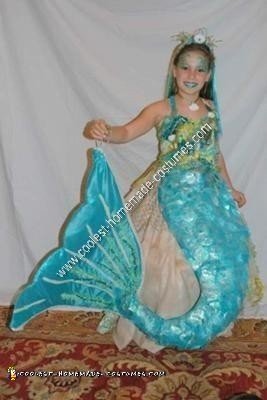 This year for Halloween, my daughter wanted to be a mermaid on a rock. I have been making costumes for my kids for a few years now, but this was by far the most challenging and detailed. She wanted the mermaid to be glittery and magical with blue and green hair and a huge fin.

The first step was to design the mermaid dress. I drew a diagram of what I wanted the top, tail and fin to look like and drew a pattern on a large piece of brown packing paper. After drawing the fin and tail shapes that I wanted, I cut them out in blue satin fabric. I lined the fin with double sheets of craft foam and inserted 1/2″ plastic irrigation flexible drip line on both sides of the fin to give it more body. I then hot glued some glittery embellishments on the fin which I purchased in the holiday decoration section at Michael’s craft store.

I also cut out the curved tail section from the same blue satin fabric. I purchased sheer iridescent fabric in blue and silver and cut out hundreds of individual circles for the “scales”. The variation in the 2 colors of the sheer fabric made the tail look more authentically “fishy”. After cutting out the scales, I painted each one with silver fabric paint around the perimeter to prevent fraying and to give them more shine. I then sewed all of the scales to the front of the tail. Because I wanted the tail to ultimately lie on top of the rock, I did not pad it heavily so that it would not be too bulky. I then attached the fin to the end of the tail.

Next came the top. I measured my daughter and cut out a simple bodice which I embellished heavily with tons of sea-themed items including: pieces of fishing-net, shells, pearls, dangling beads and even a few miniature starfish. I pleated and ruffled green and blue scraps of fabric to simulate seaweed and ocean grasses and embellished everything with blue and green rhinestones. I was very pleased with how the top came out. I attached the tail to the top so that it could be worn without the rock(like a dress).

For the rock, I purchased 3 yards of felt fabric in various shades of tan and brown that looked like the colors of a rock. I cut a large circle of the felt fabric and appliquéd seaweed, fish and shells all around with ruffled ribbons and glittery fabric. To make the rock “stand-up”, I inserted a hula-hoop inside which I attached with fabric tabs after removing the beads inside it which make noise. I cut out a circle in the center for the waistband and attached an elastic to it. This way the rock was removable.I also draped some fishing net and starfish to the rock.

Finally, I decorated a headband with the same type of embellishments that I had used on the top and attached synthetic blue and green hair directly to the headband. I did an Internet search on face painting styles to find one that I liked and purchased some face paint on Ebay. The face painting really completed the mermaid look beautifully and was not as difficult as I would have expected.

My daughter was thrilled with my Homemade Mermaid on a Rock Unique Halloween Costume Idea and received many compliments on it! It was a lot of work but seeing the finished costume made it all worth it. 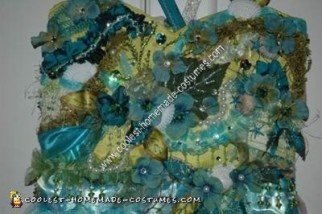 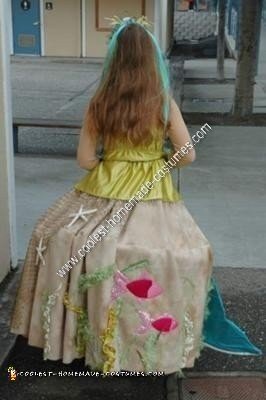 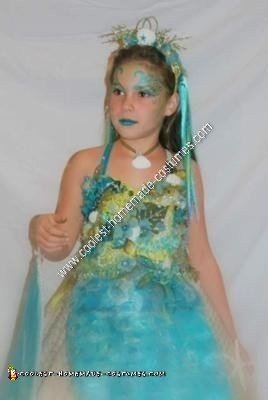