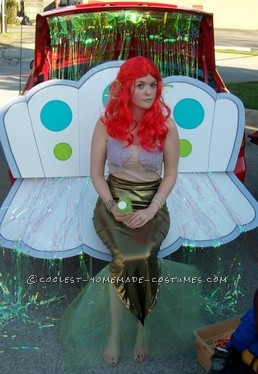 Year before last, I decided I wanted a mermaid costume in a giant shell for our church’s trunk or treat Halloween celebration. I’ve always loved making costumes, and this is one of the most handmade, more detailed costumes I’ve put together. There’s still that little girl in me who loves to play dress up, and one of that little girl’s favorite movies just happened to be The Little Mermaid.

Wig and makeup: I got lucky and scored a bright red (unused) wig from Goodwill for $5, that I’m excited to be able to reuse for costumes. I hadn’t planned on making my costume an “Ariel” costume, but I knew I wanted blue makeup, so the red contrasted nicely. I bought some blue and white face makeup and glitter gel to add to the blue/green shadow and liner I already had in my makeup kit. Then I used a red, oil-based makeup crayon to color in my eyebrows to match the wig.

Fin ear cuffs: I made “face fins” inspired by a cool online makeup tutorial: I used blue floral wire and the same tulle as my tail fins, then got a little fancier and hand sewed gold and green sequins to the tulle with gold thread. You simply shape the wire into whatever shape you like, allowing for extra to clamp around your ear, then glue or sew your fabric on it. (I don’t recommend using glue for tulle, though. Hand sewing is the way to go if you can stand it!)

Mer-tail: I created the tail from stretchy metallic knit that I had leftover from a goddess costume. The fabric isn’t the cheapest (I found it on sale,) but you only need a couple of yards. I traced a fitted, pencil-style skirt I had in my closet with chalk on the back of the fabric, down to knee length, marking where the knees were, and then tapered off into a v-shape at ankle length. I folded the top of the waist on each piece down and sewed to create a neat edge. Then I pinned the pieces (pretty sides together) and sewed seams down to the mark I made for knee length. I sewed a zipper into one of the side seams – it’s really easy- google it! – and cut the excess fabric from the seams. The end result is a tail-shaped fin with slits on each side from the knee down. I folded pieces of tulle in half, cut into fin shapes, and sewed the edges to each side of those slits to create the illusion of a mer-fin.

Accessories: I have a drawstring jewelry bag that looks just enough like a shell, and bought some dollar store glass vase filler (the round glass “stones,”) to put inside. I sprinkled lots of loose glitter in with them, closed the bag and shook it all up, then handed my “bubbles” out to kids who could guess which hand the bubble was in. I also made some bobby pins by gluing/sewing shell and fake pearl beads (leftover from my shells,) and added some pearly jewelry.

I bought 3 pieces of dollar store foam board, placed them side by side and sketched the shell shape I wanted, then cut them all with a blade. I then painted them with acrylics and added glitter, and attached them by essentially sewing the pieces together with clear monofilament thread (fishing line,) so that they were hinged together and could curve slightly. (You could use tape, but with a large piece like this, I didn’t want any to show.) I got the stool I was going to sit on and traced the top of it onto the bottom middle piece of my shell, and cut that out so that I could sit directly on the stool while still giving the illusion that I was sitting in the shell. After taping an iridescent door curtain to my open trunk, I hung the shell from the inside of the trunk door, and viola! My costume was complete.

I don’t  consider my husband’s pirate costume to be handmade, but it’s worth mentioning that his entire outfit was made of either thrift store or dollar store finds and things we already had. Plus, every mermaid needs a pirate!

The audience was split – there was either a look of pure glee on their faces (mostly the girls’ reactions,) or a look of confusion and wonder (usually found on the boys.) Either way, they loved the simple guessing game and the glass bubbles (by the way, every kid got a piece of candy from our treasure chest, even if they didn’t get a bubble.) As much as I love to make costumes for my own enjoyment, it’s even better to see others’ reactions, especially kids. One of my childhood friends was able to come and bring her children, and, when they got home, one of their girls said I “was the prettiest mermaid ever, even better than Ariel because she gives bubbles and doesn’t just sing.” That made the whole experience for me! 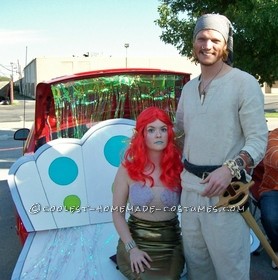 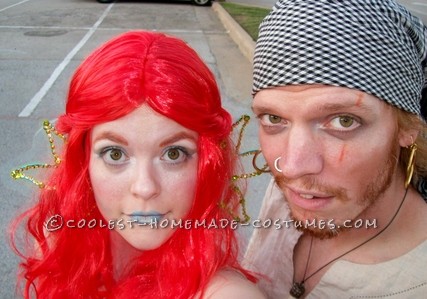