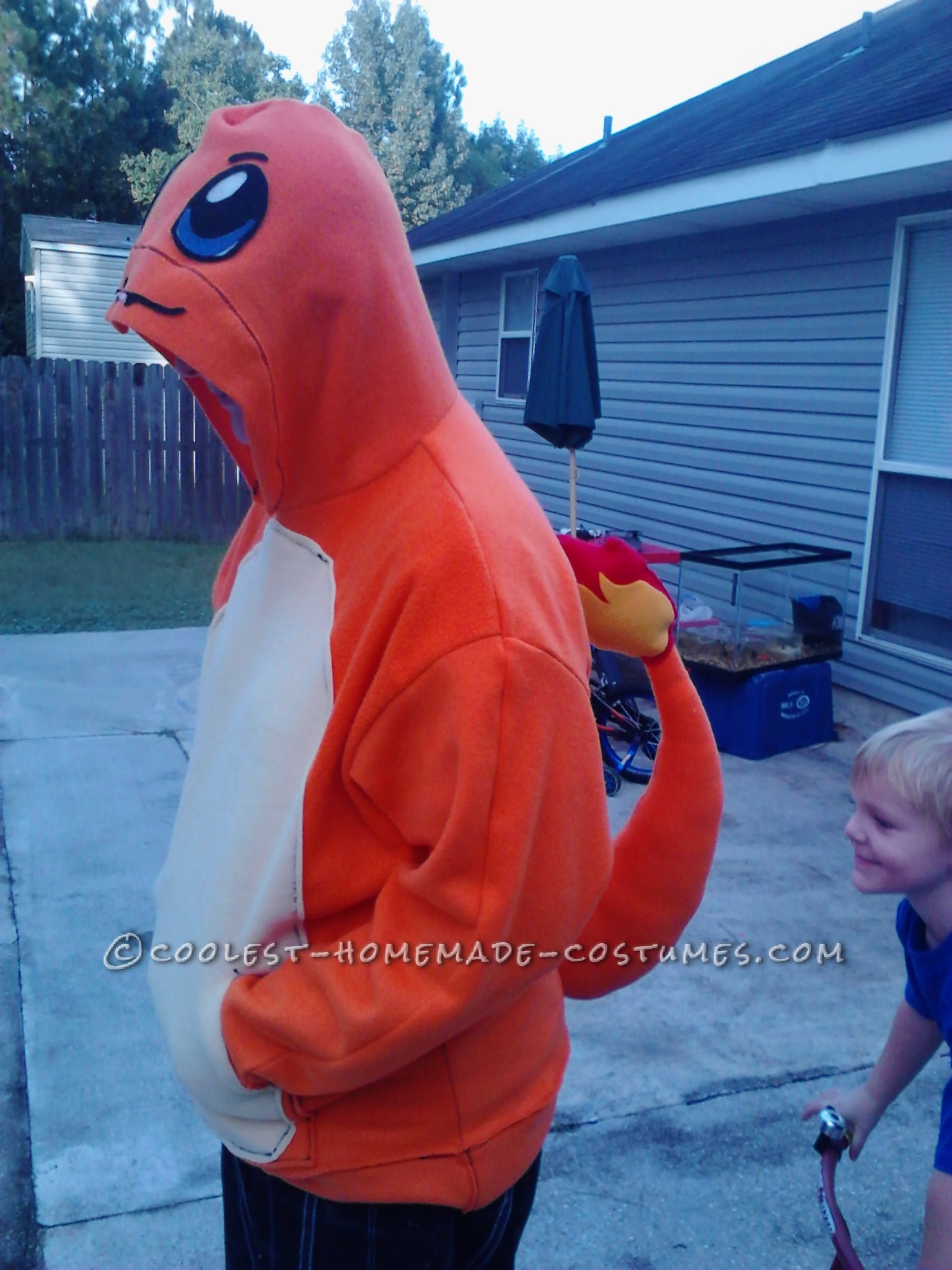 Pokemon is our theme this year for Halloween as chosen by my boys. Zander chose Vaporeon, Kaiden chose Squirtle, and I chose Charmander. All of these Pokemon have been done before by various people online for Cosplays and such; however, none of them had instructions for the sewing-challenged like myself. I scoured the world wide web and saved photos of different interpretations of the 3 Pokemon into costumes as well as photos of the Pokemon from front and back views to use as reference. It took a lot of time, work, and trial and error to get it done but I’m happy with the result and hopefully I took enough pictures and can explain the process well enough that you can make your own without having to reinvent the wheel to do it.

I had trouble finding a hoodie pattern. The only one I could find in stores was $16 and I wasn’t about to spend that much so I just used one of my hoodies and traced the parts for my pattern. The hoodie I used was a size XL, but I didn’t add seam allowances so the final hoodie ended up quit a bit smaller than the one I based it on.

I took photos of my patterns and used Photoshop to add the measurements, enlarge them to that size and divide them up on normal paper sizes, so in theory, you should be able to print them and tape them together. Here I have attached the sleeve, pocket, hood, tail, and front body. I didn’t include the back body pattern (forgot to take the photo), but you just add a little on the collar line like the picture shows in light blue.

Prepare your patterns. Trace the sleeve, front body, back body, pocket, hood, and tail on orange fleece.
***note*** You may want to trace the pocket on the yellow because the belly color will include the section the pocket needs to be.  I forgot about the belly color and had to add the yellow over the pocket that I had made in orange***

All of these pieces need to be traced onto folded fleece. The patterns are labeled with which side needs to be on the fold. The tail does not use the folded edge, you just need 2 of them so its easier to trace on a folded piece and cut once than to trace and cut twice.
**note** I wanted my hood a little bigger so I added an extension afterwards.**
***note*** I added a band at the bottom of mine. If you want to skip that step just make your body pattern longer by a few inches.**

Open up your front body piece and lay it out. Use paper or poster board to draw the belly color pattern. I forgot about this part and thus didn’t make a real pattern like all the other parts. I added the belly color after the rest of the hoodie was already finished. (see photo) Cut out pattern and trace it onto a folded piece of the light yellow fleece. Cut it out.

You have 2 sleeve panels both are folded over already from cutting out. One at a time, pin the long side and sew. Leave both ends open. Turn inside out so the sewed edges are on the inside. Now you have 2 tubes for the sleeves. Set aside.

The hood is already folded from cutting out. Align and pin the curved part which will be the back of the hood. Sew, leaving the bottom and front open. Turn inside out like the sleeves. Set aside.

If you want to add a band cut a really long piece of folded fleece about 3 inches wide (6 inches wide when unfolded). I inserted the bottom edges of the hoodie into the opening of the band and pinned (one side of the band on the inside and the other side on the outside). Sew the band on all the way around the bottom. Let the band overlap a little and cut off the excess. Then sew the open end closed.

Flip the entire hoodie inside out. Go ahead and try it on… I know you want to. Now that is out of your system, we move on.

The Tail and Flame:

So we already cut out our tail pieces in the previous step. Align the 2 pieces and pin together. Sew all but the large end. Turn inside out and stuff with the poly-fiber stuffing. Set aside.

I’ve included the flame I drew. It should be the right size so just print it and trace it onto a piece of folded red felt. Cut out. You should have 2 red flames.

Turn 1 of the sets of flames (a yellow and a red) over so you have mirror images( see photo). Go outside with a can of spray adhesive. Spray the back of one yellow flame and apply it to the front of one of the red flames. Repeat with the other set. ***Make sure the 2 sets are mirror images so when you align the 2 for sewing, the yellow flames face each other.***

Align the 2 flames, yellow flames facing each other. Pin and sew all but a few inches at the bottom, just enough to be able to turn it insides out and stuff. Turn inside out. Now the yellow flames should be showing on the outside. Stuff the flame. Sew most of the gap you left. Leave just a little section open, just enough to accommodate the small end of the tail.

Again, give in to temptation and try it on.

Trace each of the black pieces on a piece of black felt. Use the white-out pen to trace on the black. Trace the color eye pieces to a piece of felt of your desired color. Trace the eye openings left in the paper on white felt. Its easier to just free hand the white triangles for the teeth than to trace those little things.
**note: trace all the pieces flipped over so the marked side will face down in the end**

Cut out all the pieces. Carefully cut out the openings in the black eye pieces. The black eye pieces should align perfectly on top of the white eye pieces. The colored pieces may be a bit too big to fit in place like they should, leaving those little slivers of white on the sides so just trim them until they fit correctly. Check the fit of the white triangles on the mouth. When you are happy with the alignment take all the pieces including the paper we cut it out from and the hoodie outside with a can of spray adhesive.

Spray the white section of one eye with adhesive. Align and press the corresponding black piece on top, followed by the colored piece. Repeat for the other eye. Spray both white triangles with adhesive and stick them in place on the mouth piece.

Lay out your hoodie with the hood centered and flattened so we can apply the face. Take the paper we cut the pieces from and use it as a stencil to help with the placement of the parts. Lay the paper on the hood how you want it.

And we are done. I’m looking forward to wearing it this Halloween. 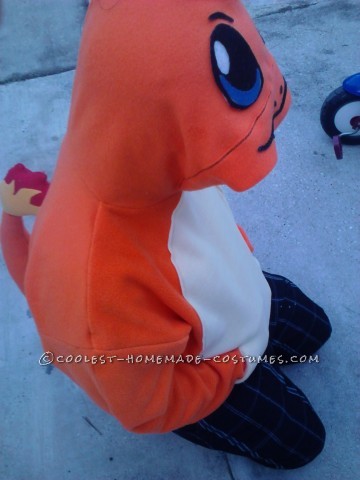 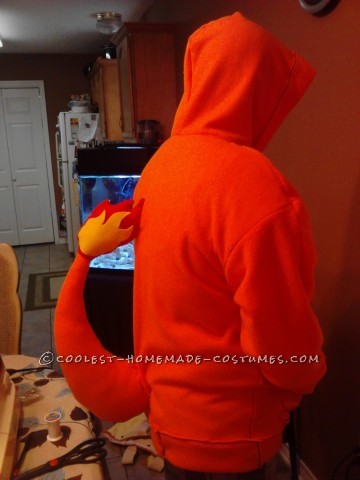 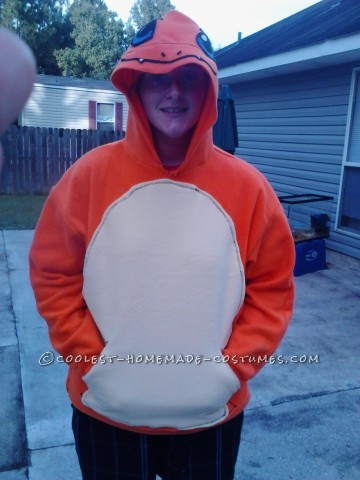 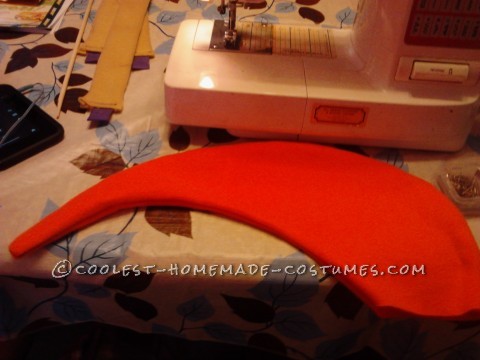 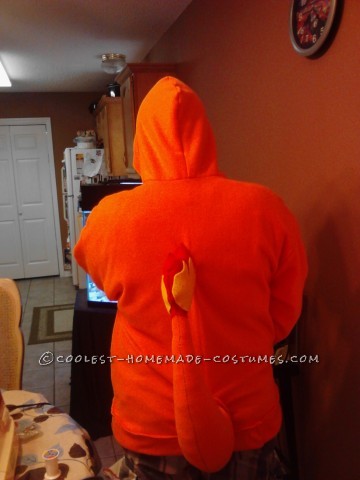 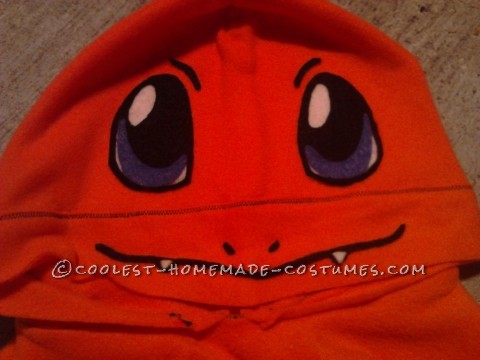 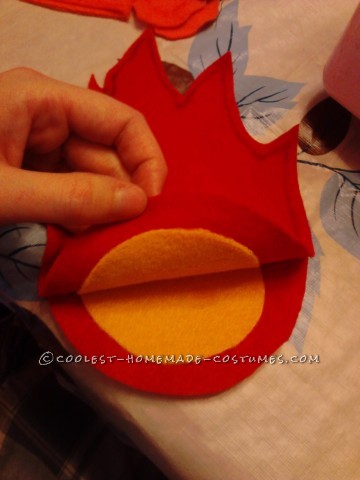 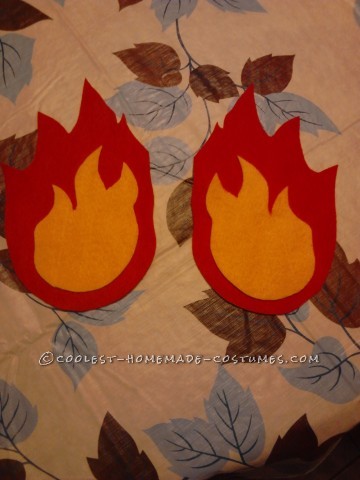 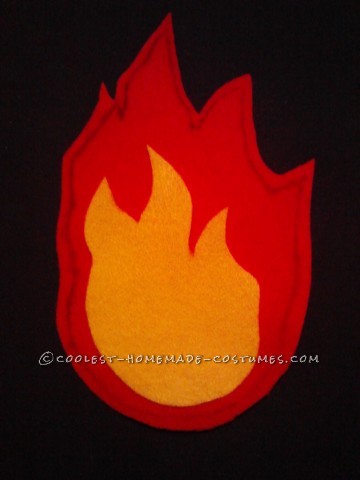