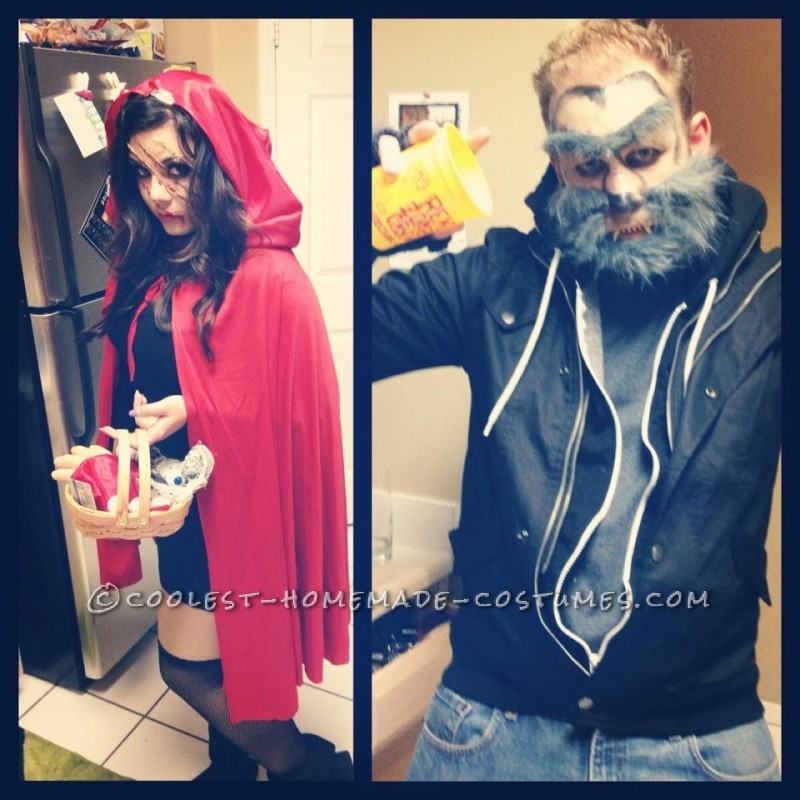 In my hunt for materials for our Little Dead Riding Hood and the Big Bad Wolf Couple Costume, I had called my mom a half a dozen time frantically asking if she had found a knee length cape. Her response was, “oh Sarah, I don’t know anyone who loves Halloween as much as you do”. I was very particular about this cape. It had to be to my knee. Not mid back, not floor length. Knee. …I don’t know, it sounded more flattering. Well, lo & behold, my boyfriend, Jerry found one in a discount bin at Savers! But it had one major flaw. It didn’t have a hood. (I think it was a vampire cape) Little Red Riding Hood has to have a hood. No big. I’ll sew one on.

So I bought a heinous red dress that happened to be the exact same color red and decided I would sew that sucker into a cape Martha Stewart style. That was a week before Halloween. The night before I decided to take on this endeavor. That was around the time I realized that I don’t know how to sew. So, I found a video on youtube detailing how to cut the pattern and sew it. I managed to cut it out and then… genius struck. My hot glue gun, beaming like a orb of hope caught my attention and I went to town. So, a few tears and half a bottle of wine later, I had successfully glued me a hood. And it was MARVELOUS.  The dress was easy. It was hanging in my closet along with a few other body hugging items that my pregnant best friend had insisted I take and get them out of her sight. The basket was found at Saver’s (I practically had to wrestle it from an old lady who wanted to fill it with flowers….YEAH RIGHT.)

Jerry’s costume was much easier than mine. Boys are always so simple. I found an ugly pair of gray gloves at the Dollar store and cut the fingers off them. Then I bought a wig at the Halloween store, gave it a haircut, and hot glued the fur onto the glove’s knuckles. They looked awesome! My puppy thought so too, as I found them tucked in his bed the morning of Halloween.

Ah, my pride and joy. I was so dang proud of the make up I did on us for this costume. For me, I used a combination of liquid latex and pieces of toilet paper (yep, walked around with toilet paper on my face all night) to make lines going across my face in a pattern that would be consistent with claw marks. I covered the lines with foundation and then cut small lines down the middle. Filled them with fake blood and TA-DA. Wolf Attack. He complained a lot through the night that he was itchy, but he’ll get over it. Jerry’s make up looked FAB. I started by covering his face in a foundation mixed with gray face paint. I attached his “fur” to his face using liquid latex. This took FOREVER and he kept insisting that his eyebrows were going to fall out when i took them off (they didn’t). I painted the tip of his nose (which he rubbed off 3 times) and then outlined it to make it look wolf-y. Insert fangs and BOOM. The most terrifying sexy wolf you’ve ever seen.

We got SO many compliments on these costumes and most of our friends didn’t recognize Jerry when he walked in. Another successful Halloween. 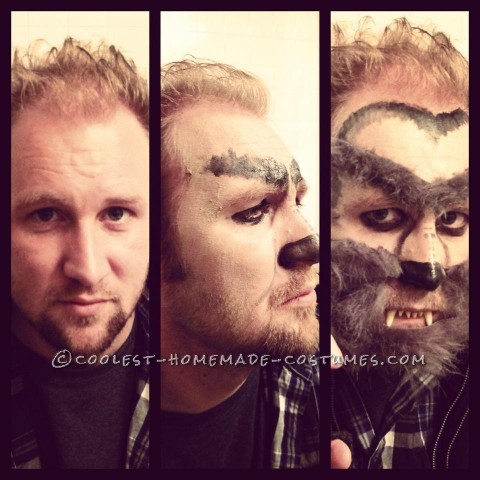 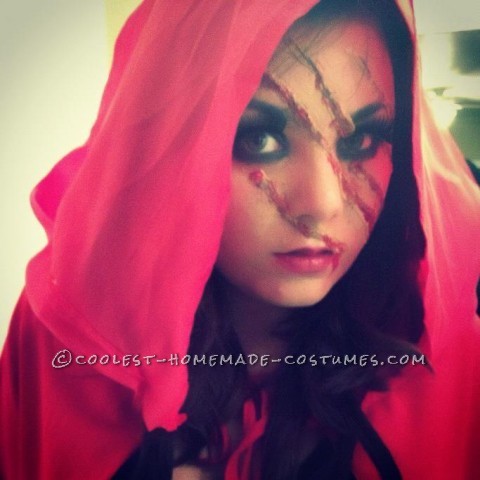