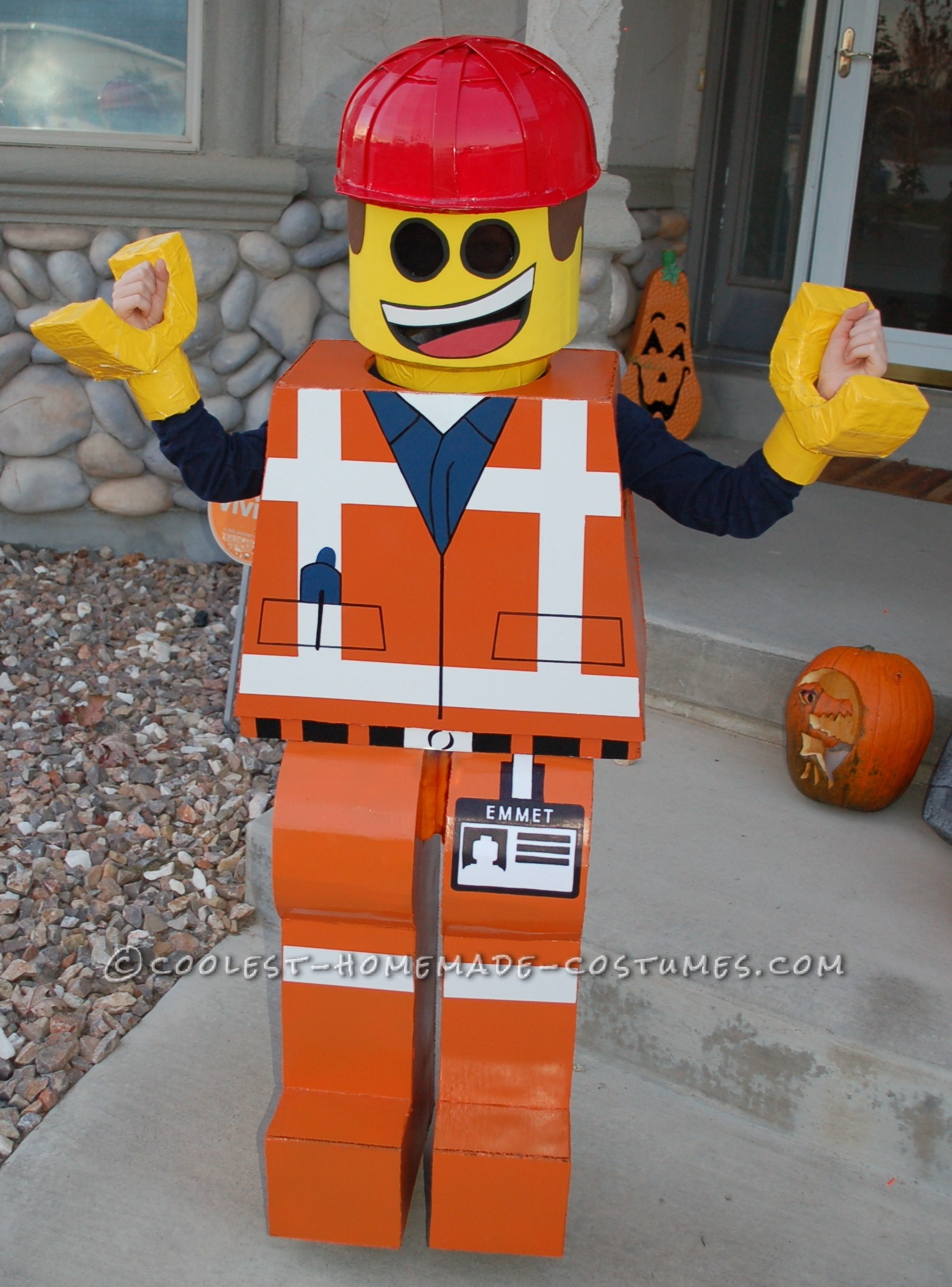 This year, my nine year old son decided he wanted to be Emmet from the Lego Movie. Last year I made him a Lego Ninjago costume, but it was very last minute and I knew I could improve upon the design this year. Since ideas of how to put it together were all I could think about, I thought I’d be clever and start early so that I’d be done way before Halloween. This, of course, just meant that instead of pulling all nighters a few nights before the big day, I had Halloween costume parts taking over my dining room from October 2 till the 30th when it had to be done for a party. (To be fair, I was also making a full body Minecraft Steve costume as well as a Frozen Anna costume, but still.)

So, knowing you CAN make something, and being EFFICIENT about it, are totally different things. After making what I swear was like 50 trips to Hobby Lobby (not even kidding, by the end of the month I’m pretty sure they all knew me by name) I finally had all the right supplies. So I figured I’d save some poor soul the trouble and lay out a list of supplies and steps to at least get you started.

As a side note, don’t let anyone kid you by saying that going homemade is cheaper. Unless you by some miracle have all the right supplies on hand, you are probably going to spend the same if not more on this costume. This is all about originality and having fun making a costume no one else will have (Elsa, anyone?). It may also be about making your nine year old with Autism feel like he is the most important person in the world. Whatever the reason, just don’t go into it thinking you will be saving a lot of money.

All that being said, this costume was a HUGE hit. We had at least 10 people ask us if they could get pictures with him as we were trick or treating. We had one company put a picture of it on their Instagram page. He got to be the finale at his school parade with everyone clapping and cheering for him as the best costume. He basically had a fan club everywhere we went with kids screaming his name and jumping up and down just because he waved at them. Seriously, this costume ROCKED, and for a day, my son got to feel like he was the coolest person in the world. So all the time, trips to the store and money were 100% worth it.

So if you are still with me…

Head
10″ Concrete Form Tube (I got it at Home Depot)
Styrofoam to make the rounded base
Foam/cardboard for the bottom (I used old camping mats)
2 Sheets Yellow foam
2 Sheets Brown foam (For the Hair)
1 Sheet Each of Black, Red, White Foam (Mouth and Eyes)
Black Nylons (To cover Eye and Mouth Holes)
1 Red Bowl (I found a perfect one at the $1 Store)
1 Small Plate (To round out top of bowl for Hat Shape)
Any Color Foam for Hat Strips
Red Duct Tape (To Cover Hat)

So yeah, see what I mean? That is just the list for the head (hence the multiple Hobby Lobby trips).

A few tips:
1) Lots of places online suggested a 12″ Form Tube, but it was HUGE on my kiddo’s head and not proportional to his body. So I went with 10″, but it’s up to you. I cut mine to 9 inches tall and then added the Styrofoam and rounded bottom foam. With that and the “Hat”, you are looking at a pretty tall head still.

2) I would spend a little more and get all sticky backed foam sheets. You are either going to spend money on that or glue and I’d rather save a step. Plus you can draw your outline on the back, which is handy.

I put my yellow foam on first and then cut out eye holes. I measured my black mouth and then cut out the hole for the inside and made the foam fit around it. I used a black marker to fill in any spots that weren’t perfectly lined up. By using Nylons to cover the eye and mouth hole, it looks black but they can see and breathe through it.

One totally random and funny thing: As I mentioned, my son has Autism and because of that is very sensitive to smells. He loved the head but didn’t want to keep it on because he hated the “plastic” smell (probably from the Styrofoam). To fix this, I took some orange peels and hot glued them right in front of his nose. Problem Solved.

*Side Note: If I did this again, I would Velcro the head to the inside of the top of the chest. I had thought about this and then didn’t get around to it but it would finish it off and make it easier on your kiddo. Our head didn’t fall off, but it would sometimes get moved especially from eager kids who wanted to touch it and we would have to adjust it. If it was Vecroed in, this wouldn’t be a problem.

Body
Cardboard (Go with Heavy Duty. Trust me on this. When 100 kids at school are touching this thing, you will want it to be sturdy)
Paint+Primer (Any color – this is going to be covered with orange)
3 Cans Orange Spray Paint (This will cover your legs too)
White/Gray/Blue/Black Paint for Detailing

For the body, I measured my kiddo’s shoulder width for the top and added about 2″ for the bottom length to get the classic Lego shape. Make your arm holes pretty close to the top for ease of movement. For comfort, add some foam or something to the underside of the shoulders so that it isn’t uncomfortable for them to wear for long periods of time. I added an interior cardboard along the bottom for the belt. I made it 2″ but didn’t account for how much would be hidden, so if I did it again, I would have made it 3″ so the actual belt would be 2″.

Pointers on the Body:
1) Use hot glue, not tape. Hot glue will make it so much sturdier and will hold the shape better.
2) Cardboard sucks up a TON of paint. So I used a base coat of paint+primer to seal it and then it didn’t take so much spray paint. I happened to have some on hand so this wasn’t an additional cost.
3) For the detailing, I used a light gray, white, black and blue that I already had. Emmet’s shirt is actually a lighter blue, but I went with what I had since it would match a shirt my son already owned.
4) To get the chest pattern precise, I printed a picture of an actual Emmet Lego and scaled it up so that I knew exactly where to draw the design. I used painters tape to get the straight edges. Basically I’m a perfectionist and this step can be as detailed or simple as you choose to make it.

Anyone that has made a Lego costume will tell you that the legs are the trickiest part. You want them to look good but they need to be as funtional as possible. The fact is, your kid isn’t going to be able to do stairs very well but he will be able to walk in these.

1) I measured the legs with a rounded side on the outside piece, and then cut out the crotch area on the inside piece. Once again, glue all the pieces together and paint. Leave the back of the legs open (see picture). Rather than, paint the Emmet name tag. I just printed one I found on the internet and glued it one, then painted the top part to make it complete.

2) To make it easy to walk, I attached the legs to the front of the body using the Velcro. This was awesome because it was suddenly one piece. When you put it on, you simply pull the legs forward till the body is in place and then let the legs go and they hang where they are supposed to. They hang just above the shoes so they just move with your kiddo’s legs.

3) As a final step to the legs, I made a quick pair of orange pants that he just wore over the top of a regular pair of pajama pants since the back of the legs are open.

For the claws, I drew out a C-shape and cut four pieces of Styrofoam for each hand and taped it together. Cut a hole in the middle and fit the cozie inside, then tape it up. This is the easiest part of the whole costume, so enjoy it!

I thought about getting yellow gloves for his hands, but by the end, decided I didn’t need to make one more trip to the store. However, it would finish off the costume nicely.

Realistically, I would plan on spending 10-15 hrs on this. Also, be warned that if your kiddo is anything like mine, he will be unimpressed until the entire thing is finished. I was so stoked when I finished the head and all I got was a “Yeah, that’s great Mom, but where is the body?” LOL!

Hope you enjoyed the tutorial and pics! I really enjoyed making Emmet this year, but most of all I loved how happy it made my son. Good luck and Happy Halloween! 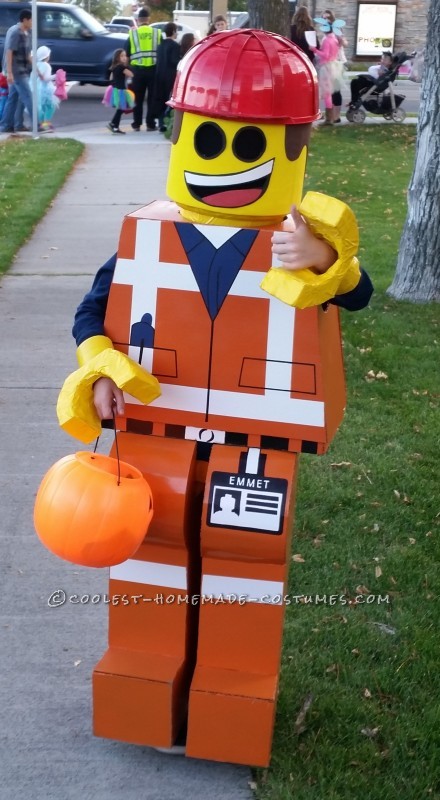 16 thoughts on “Everything is AWESOME about this Emmet Costume”