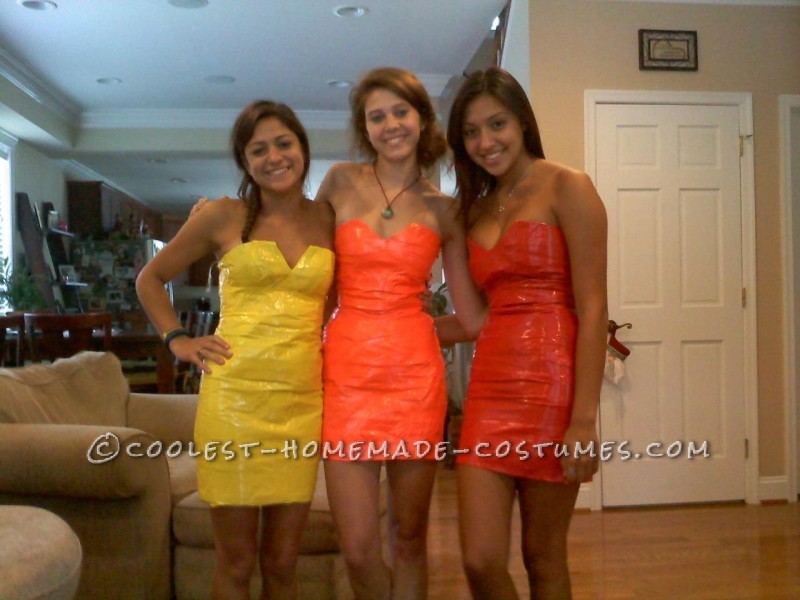 So my friends and I decided that we should take our love for taco bell to a new level and be hot sauce packets for Halloween one year. Off to the drawing board we went…how are we going to execute this plan? Sure, we could just get colored dresses and then draw the words on (because none of us are talented enough to actually sew) but then we thought DUCT TAPE. And at first, you think, okay duct tape will work. And its very fitted so at least we’ll look good. Oh my god. If you ever consider making a duct tape dress, make it the day you wear it.

We started our dresses in September. So we bought cheap, strapless dresses and taped each other up and I wish I was joking when I say that I thought I was going to pass out due to lack of oxygen. Mission accomplished. But wait, Halloween isn’t for another month. We needed to cut ourselves out of our dresses, easier said than done. I got stabbed with the scissors so many times. But at last, we weaseled our way out of the duct tape confinement. We began cutting paper pieces out to tape to the dresses using clear tape and after HOURS upon HOURS, we finally finished. Well basically, we’re getting ready to go to a party and we squirm back into our duct tape dresses, but they shrunk…a lot. Eventually we got settled and taped the dress back together. But we didn’t think about how difficult it would be to sit down. I have no idea how I didn’t get in a car accident because the entire 30 minute car ride I was basically standing while driving. We get to the party and start having a good time, people are fawning over our homemade creation.

All is hunky dory until we have to go to the bathroom. The dress can’t be lifted, and as learned in the car, sitting isn’t an option. We had to take toilet paper outside with us and pee on trees while standing. Awful and messy experience. Once it gets later, we get tired of the dresses and carefully cut them off, anticipating that we will re-wear them at another party that week. Wrong. In the morning, I woke up to my beloved costume in the shower, COVERED in vomit. The worst part about it all is that we did not get ONE SINGLE PICTURE of the 3 final hot sauce packets together. I want to cry just thinking about the lack of photo evidence. But luckily for me, I took multiple pictures of my costume so there’s proof that this happened. 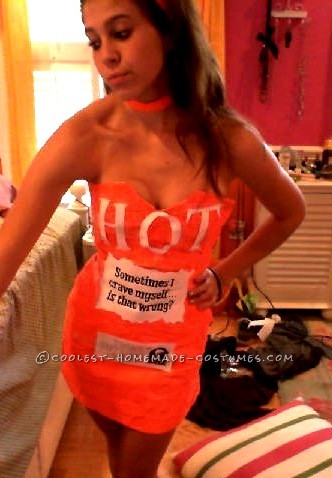