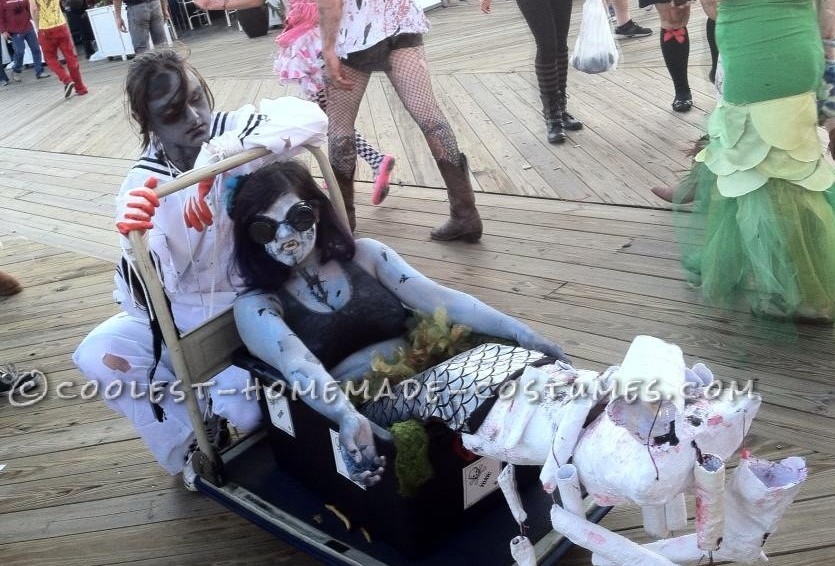 I never liked “happily ever afters” from a very young age. I remember growing up thinking to myself after every Disney movie,” This could’ve went wrong very easily” So one Halloween I decided to show people what that “wrong” alternative could have been. My first successful costume showing this was Little Miss Muffet wrapped in a spider web and having spiders all over her. Everyone was caught off guard at this idea coming from a 7 year old girl. Now 10 years later I wanted to bring back that idea of “happily ever after” being a myth.

I remember sitting in my room a few months before my towns annual zombie walk and thinking to myself, “what would get the people’s attention” I began my search with possibly creating a zombie wizard of oz scenario. I soon forgot about that and came up with the idea to create my own rendition of the little mermaid. The problem that struck me then was what kind of Little Mermaid I would want to portray. I could do a classic zombie version or even hipster Ariel, but instead I came up with something that would cause everyone to turn and gawk. I created Ariel if she were to be alive in today’s world.

To begin with, I started planning what components I wanted my rendition to have. After looking over many different pictures of zombie mermaids I came up with three main parts of my costume. A tail bone, a toxic waste bucket, and goggles. After determining these parts I decided the backstory of my piece would be this: Ariel and her family were so centered on singing because they are all really sirens.

Ursula got her powers as a result of all the toxic waste being dumped into the ocean. Prince Eric was a sailor on a fishing boat. Ariel came to the surface trying to lure Eric into her siren lair. When she was unable to do so she went to Ursula to turn her into a human. Ursula cast her spell onto Ariel but as a result of its toxic waste origins it didn’t work the way it was supposed to. Upon coming to the surface her tail withered away to some scales and pieces of bone. Her skin decomposed and she lost her young glow and she was reduced to a fish with tethered gills. Finally ending in her sight becoming very sensitive to sunlight and she found abandoned goggles on the shore of the beach and used them to protect her eyes.

Once the transformation was complete she was left on the shore to die. Eric came and found her and put her in a spare toxic waste bucket that was on the ship. He kept Ariel as his pet and made a fortune from her oddity. He got very sick from being exposed to her for so long and she ended up biting him and making him a product of Ursula’s toxic waste magic too. As a result they are now both doomed to walk the Earth.

In order to create this costume I used a black sports bra, silver gill print leggings, steampunk goggles, a light blue mini top hat, a plastic container, toxic waste stickers, and paper mache strips. I knew that making the tail would be the hardest part so I began working on that first. I crumpled up pieces of paper of different shapes and sizes to make the end of the tail. Then I wrapped them in paper mache strips and allowed them to dry.

To make the tail for the bottom half of the legs I tapped paper around my legs and then put the paper mache around it as well. To make the part of her that would still be scales I cut the inside leg seams of the scale leggings and sewed them back together around my legs so it would be form fitting. I then cut where the “bone” part of the tail would begin.

Out of all the costume pieces the tail was the hardest and most time consuming. It got to a point where I didn’t want to finish it because of the time it took up. A day or two before the zombie walk I went in a mad frenzy to finish it and somehow managed to get it done. When the whole piece came together I was very proud that all the work I put in finally paid off.

Once at the actual zombie walk my boyfriend was Eric and he was pushing me around in the toxic waste bucket. So many people were stopping us for pictures. I had a lot of fun scaring all the little kids who came to take pictures with me as well. We generally got two different reactions from the public. One was how cool the entire costume was and the second was people feeling sorry that my boyfriend had to wheel me around all day. It was a very cool costume to make and I hope that me deterring from portraying these fairy tale figures as “normal” is inspiring to others to think outside the box and be themselves even if it isn’t what is defined as “normal”. 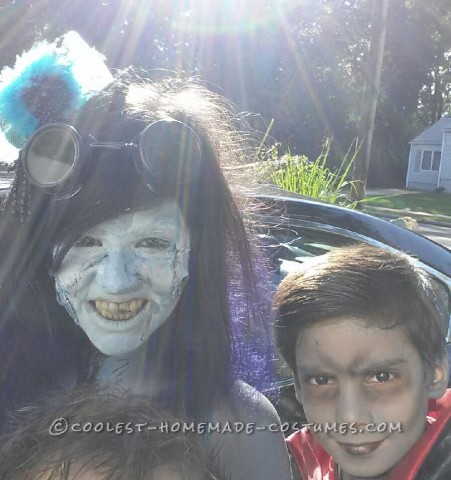 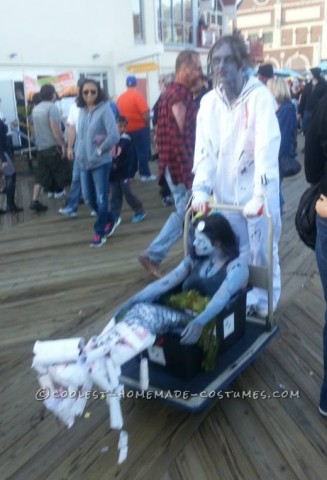 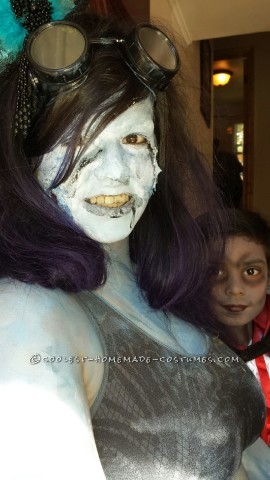