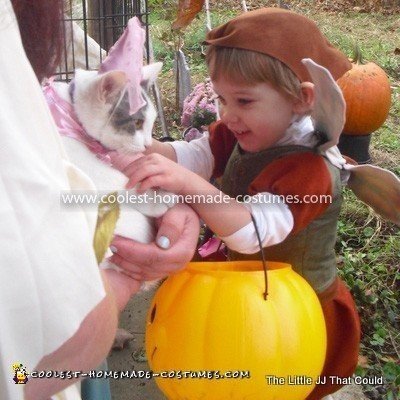 I wanted to make a costume for my 22 month old son that was something unique. One day he was flitting in between the trees in the yard so much like a little woodland imp; that is when inspiration hit. I know that it is a feminine option but I felt that I could pull off a Homemade Woodland Fairy Prince Costume.

I found some microfiber fabric at Joann in woodland tones of orange, green and brown. I used a pair of my son’s shorts to create a pattern for the fairy shorts. I went large and used elastic to gather at the legs to that the pants had a very bubble like silhouette. I then used a shirt to create a pattern for the doublet/vest and then fitted it to my son. I used a snap press to create snaps for the closure. It was a perfectly tailored doublet/vest, and my petite son that barely grew in 22 months had a growth spurt and it was short once Halloween came. Instead of a little toddler pot belly sticking out I created a cummerbund that is worn under the vest. The sleeves were made in the same puffy style as the pants; over sized with elastic gathering around his arms.

Northeastern Halloween weather is pretty indecisive. So I wanted to make sure that my son can wear his costume if it is warm or cool. I hand dyed some opaque tights and a white long sleeved shirt to be worn underneath. His costume is accessorized with a little brown Robin Hood style hat that I sewed up swiftly at the last minute and a pair of fairy wings that aren’t glittery and girly. I made the fairy wings with 12 gauge wire and a pair of microfiber tights. I hand painted the wings. The wings snap to the back of my son’s costume so that they can be removed for car travel. 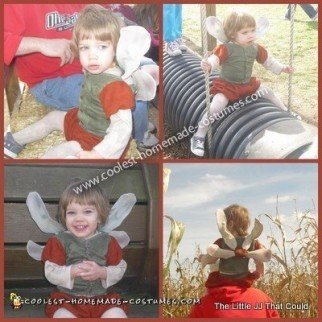 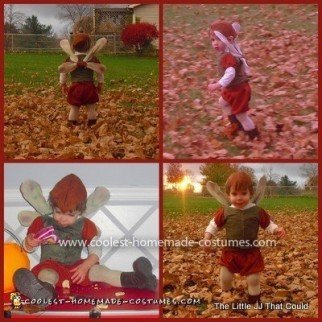 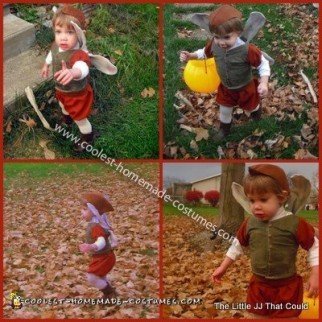 Creative Queen of the Woodland Creatures Costume for a Girl