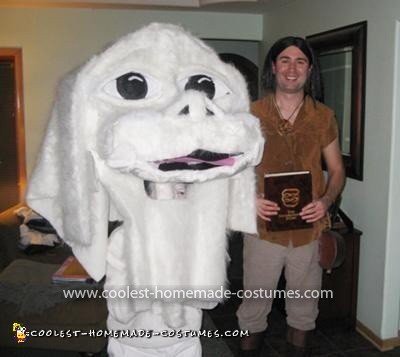 I can’t express enough how happy these costumes made people! We wanted to do something completely original last year for Halloween. Since The NeverEnding Story was one of our favorite movies from both of our childhoods, we decided on Falcor and Atreyu NeverEnding Story Couple Costumes.

Falkor had to be LARGE, since he’s a larger-than-life luck dragon. We used several boxes to build the basic frame, than added quilt filling to puff up areas around his cheeks and mouth. This was then over-layed with paper mache and painted white. I love molding paper mache! You’re able to do so much forming by adding more and more layers.

We bought white fur at the fabric store and by folding, gluing and stapling we were able to give his face quite a bit of definition. We painted giant styrofoam balls for his eyes, and added glitter speckled felt for detail. The final touch was giving him his happy-faced smile. We used a giant, pink spongy kids craft material.

The head was soo large that we mounted it onto a solid cardboard tube (the paper core from a wide format printer which I recycled from work), draped white fur from his neck with eye holes, and carried the head above me. He was 7ft tall!

Atreyu was a bit easier, we just picked up a few odds and ends at the thrift store, and trimmed down a wig. To properly accessorize, we of course needed the NeverEnding Story medallions. So, we molded some clay and painted it a copper and silver metallic color. We tied one to a leather string which Atreyu wore around his neck and glued the other to the front of an old book. We had made a fake leather cover using a color printer and Photoshop for the book.

This NeverEnding Story Couple Costume brought so much joy to people, it was very infectious! We walked into a party and everyone turned around, oooing and awwing, then someone yelled ‘I love you Falcor!’ As the night progressed, we walked up and down streets in Chicago, people were jumping out of cabs to get their picture taken with us, Falcor was hugged repeatedly, buses were singing ‘the NeverEnding Story’ theme and people were even screaming from various bars ‘I LOVE that MOVIE! THANK YOU’!!

It truly was an awesome night. I think it would be fun to write a blog titled ‘Falcor for a day’ because it honestly made so many people genuinely smile and be happy. 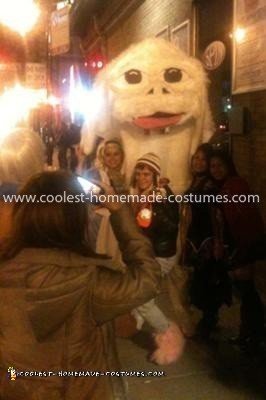 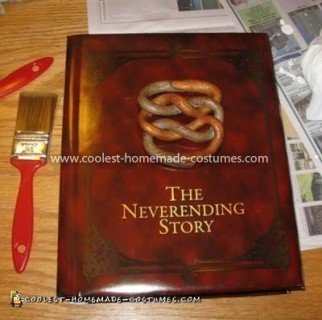 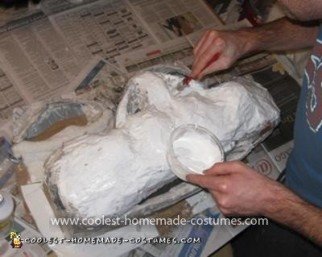