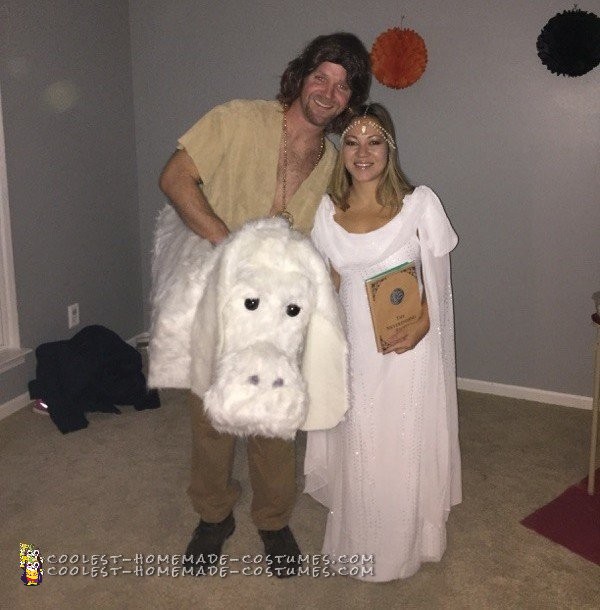 I love the 80’s so as a big fan of The Never ending Story I thought this would make the perfect costume for my husband and I to create for a party we were attending. It got such a great reaction from everyone except the young 20 year olds who were clueless. My kids loved it and laughed the whole time I was forming Falkor. The people at the party were amazed at the life like dragon and I think this costume brought back some really great memories of this forgotten movie we grew up with that was so popular when we were young kids. Falkor the good luck dragon was so loved in the movie which was the biggest part of the costume.

We were invited to a Halloween party and won most original costume which consisted of a bag of Werther’s Originals as our prize. I changed my mind many times trying to come up with a good 80′ couple costume and made my final decision because of the cute dragon. I feel like his face even shows emotion in the costume and just ties everything together so I guess you could say it wasn’t a couples costume since there were three of us. He started out as a cardboard box and turned into Falkor after lots and lots of tape and glue sticks.

My husband’s outfit was from a second hand store and we just cut it up with scissors. His necklace is made out of a medal my son had in his closet with a toy snake glued to it. My costume portrays the Childlike Empress but was an elf costume that was purchased from the store so no creativity points on that one. I printed out the book title and taped it to one of my kids books to make it look like the novel in the movie. My husband had to sport a wig since he is normally bald and I am only 4’10” so I really did resemble the child from movie. I had so much fun making this costume and plan to use it again in the future to bring a smile to any ones face who came from the 80’s.

It’s crazy to believe a cardboard box and a bucket turned into the dragon. I started with a large cardboard box and cut the top and bottom out just enough for my husband to fit inside. I then attached a bucket to the top to form the head and secured it on with tons of heavy duty packaging tape. His eyebrows, nose and mouth were formed by scrunching plastic bags and paper together and covering them with masking tape. His eyes were two easter eggs halves covered with a black permanent marker. I secured the eyes with a glue gun. The furry material was attached section by section with two flaps cut out for the ears. 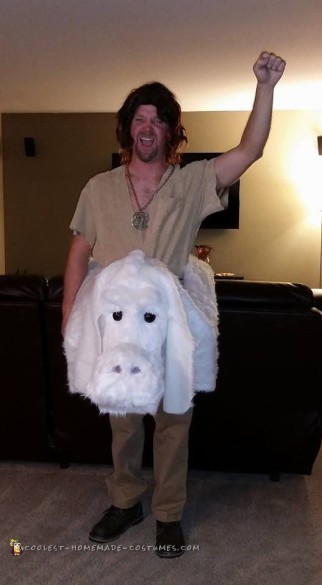 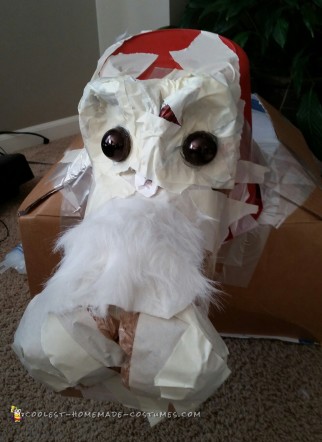