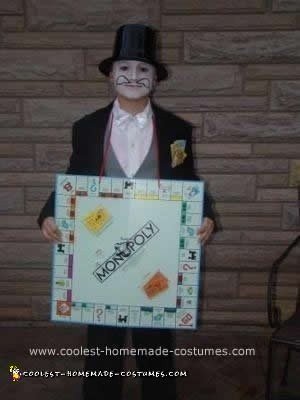 Mr. Monopoly Costume, EASY and genius! A black pair of trousers, blazer and waistcoat were bought from the Thrift store. The white shirt was ours. A black plastic hat $1. A Monopoly board was also bought from the Thrift store, the pieces were hot glued on as though there was a game in process. A piece of ribbon was attached to the board so he could wear it around his neck. Monopoly money was put in his top pocket and he carried the rest around. Simple white face paint with a moustache did the trick to finish the look.