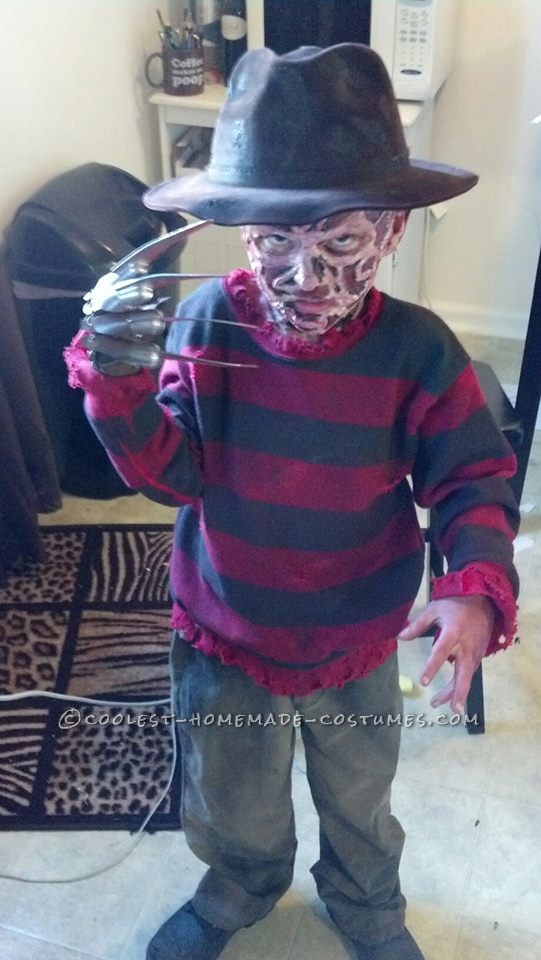 My 6 year old wanted a Freddy Krueger costume for Halloween, but all the costumes were either too big or too tacky, so I decided to make him one.

The face was done with liquid latex. First a bald cap was applied. A thin layer of liquid latex was then dabbed on with a sponge over his entire face, head, neck, and left hand. After drying, another layer was applied and while still wet, strips of rolled up toilet paper were applied to add depth to the burns. Then they were saturated in latex as well. This process was done for the entire head, neck and left hand. The ears were run off onto the head to make it look like they melted to his scalp (just like in the movie) and a menacing brow was added after several layers of build-up. This part alone, not counting the paint, took about 2 hours. It’s pretty hard to keep a 6 year old still for that long, but with the help of “Monster’s University” and a steady supply of apple slices, it wasn’t that bad. LOL! After all the latex, details in the burns and toilet paper were applied. This allowed for the desired depth and look to be attained. Then it was time for paint. The paint on all the areas that had latex (98% of his head, and neck) was acrylic. The areas where the paint was going directly on his skin (i.e. the small area around his eyes, between his fingers, inside his ears) were done with regular Halloween face paint. After that, his teeth were yellowed with Halloween teeth dye. The result was a latex mask that was specifically fit to his face, and stuck to his skin, moving with all his facial expressions. It was pretty creepy.

The fedora was originally for a teenager. I found it on eBay for 7 dollars. I had to do a lot of fabrication and customizing on it to make it fit him right and then added foam around the inner band for comfort. After that it was aged with a torch, a Dremel tool, sandpaper, and acrylic paints mixed with water to get the dirty look.

The sweater entailed a considerable amount of work. They do not make a Freddy sweater for a 6 year old that isn’t either A) far too large, or B) unbelievably cheap looking. I had to make one. I bought a Hanes plain red sweatshirt for 10 dollars on eBay. I layered down masking tape to get the stripes, and then applied a thin coat of white to break up the red. After that, the entire thing was painted in dark green and allowed to dry. After the masking tape was removed… voila… a clean 6 years old sized Freddy sweater. I then aged the sweater and weathered it with the same process I used on the fedora. It looks disgusting and dirty in real life, and honestly the pictures do not do it justice. The sweater was one of my proudest pieces of this costume.

The pants were bought from Walmart for 12 dollars, along with the boots for 12 dollars too, I think. They were then aged with the same process the sweater and fedora were aged. They literally look almost identical to the pants Freddy wears. After all the aging, dying, and coloring were finished on the clothing, they were all thrown in a wash together and then dried. This made the weathering I had done on the sweater unravel and fray a lot (which is exactly what I wanted) to really pull the look together.

Finally… the glove. Just like the sweater, all the gloves for kids this size are either super cheap and crappy looking, or way too big. I had to flex my creative muscles. I purchased a cheap one for 8 dollars at Amazon and got to work. First, I took it COMPLETELY apart. The base cloth glove that came with it was then thrown away. I used a glove that fit snug to my boys hand, and dyed it dirty leathery brown with black stains. After that all the remaining pieces were painstakingly cut down to the correct size, sanded, and painted to look rusty and menacing. It was all then put back together with a lot of wire and a few pop rivets. The glove turned out fantastic.

We got a lot of great looks from other parents and kids while we were out trick or treating. Some thought it was awesome, others thought it was “too graphic” for a child. My little man knows it’s just a movie, and although he’s never seen it (we won’t let him), he can’t wait until he’s old enough to. He collects Freddy and Jason action figures and masks and LOVES this stuff. To those parents who were against the costume I say, “Stop being uptight prudes. He had a blast.” 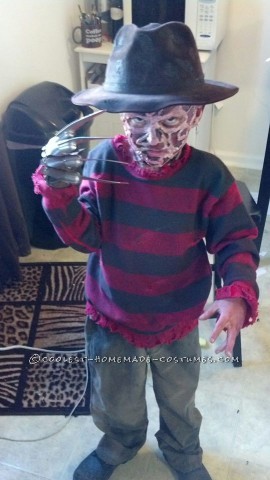