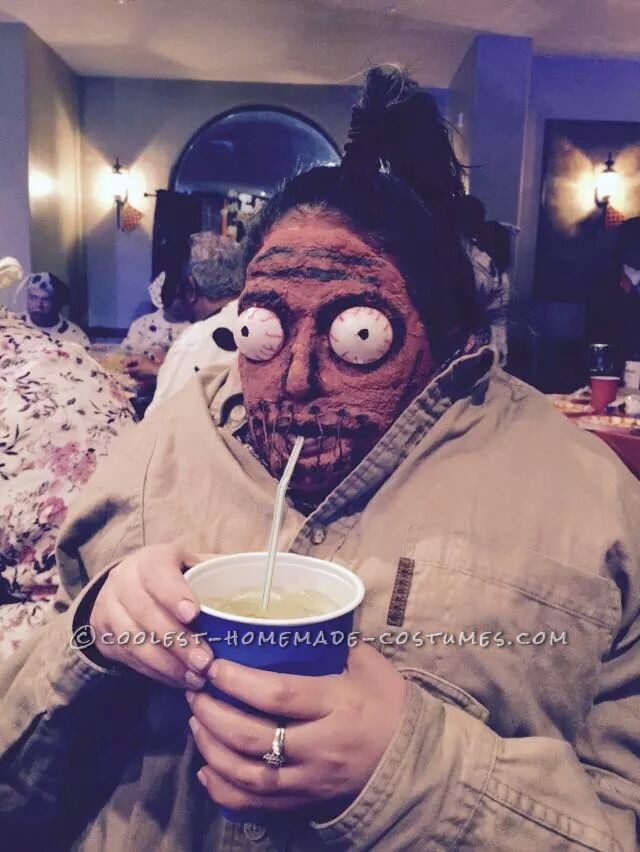 I try to come up with different things every year. This year I came up with Beetlejuice and shrunken head. The Beetlejuice was the less difficult one but the shrunken head was a challenge; but I love a good challenge. Our costume was a hit at the Halloween costume party. We felt like celebrities with all the pictures people wanted to take with us.

For beetlejuice we bought the suit at a Goodwill along with the white shirt. We bought the white ruffles for the shirt at wal-mart for $2.00 dollars and the bow tie and used a white pair of golf shoes we had. We made some tears on the suit and poured flour on it.

The wig was a half scalpe dirty blond wig we bought at the mall for $14.00. I dont think we spent more than $25.00 on his costume. I put his wig on and secured it with latex so it wouldnt slip off. Good thing he’s bald.

Next I painted his face all white except around the eyes. I scattered latex drops on my husbands side of the face, top part of the scalp and around the mouth and blow dried it for a quick dry. When the latex dries it leaves a glumpy surface so I used a sponge to put the green over the glumpy latex and it made it look like vomit. The more the better.

Next I went off to the eyes. Painted them completely black.

Lastly, I teased his hair, spray painted it with a bit of silver to give it that dirty look and Wala! Beetlejuice!

The Shrunken Head makeup took around an hour to do. The materials I used were Latex, cotton, brown thick string, kleenex, paints black(red, brown, white -mixed together to create a mauve color for face). I put latex around my eyes in a glasses shape, two latex lines on my forehead, and around my mouth making it look like a santa claus beard. I put cottons strips on top of all those latex lines.

Start with the painting. I mixed three paints together, red, white, and brown, mostly white though to make that mauve look and applied it all over my face. I painted black lines on my nose for that skeletal nose look and lines on my forehead and neck.

Next I used latex and made latex dots all around my mouth and stuck the brown strings to make my mouth look sewn. I cut ping pong balls in half and made a hole in the middle to see, and painted blood veins around. You can look for a beetlejuice shrunken head makeup video on youtube which will adequately explain the procedures better than me.

For the body, I used my son’s school pants, my daughter’s brown boots and my husband’s brown shirt. I wrapped three towels around my shoulders and a scarf around my neck. Then I put on the shirt. I made a ponytail which I painted black and made sure it stood up.

This costume is one of the funnest inexpensive costumes I have ever done. It was a hit at the costume party. Felt like a celebrity! Everyone thought I was wearing a mask! 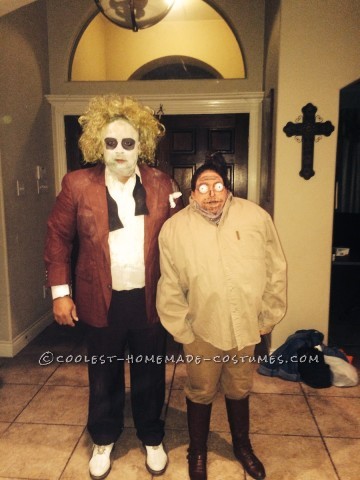 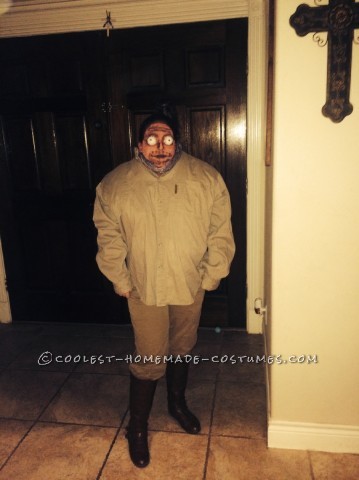 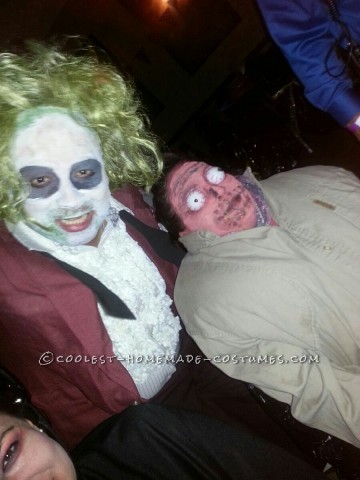