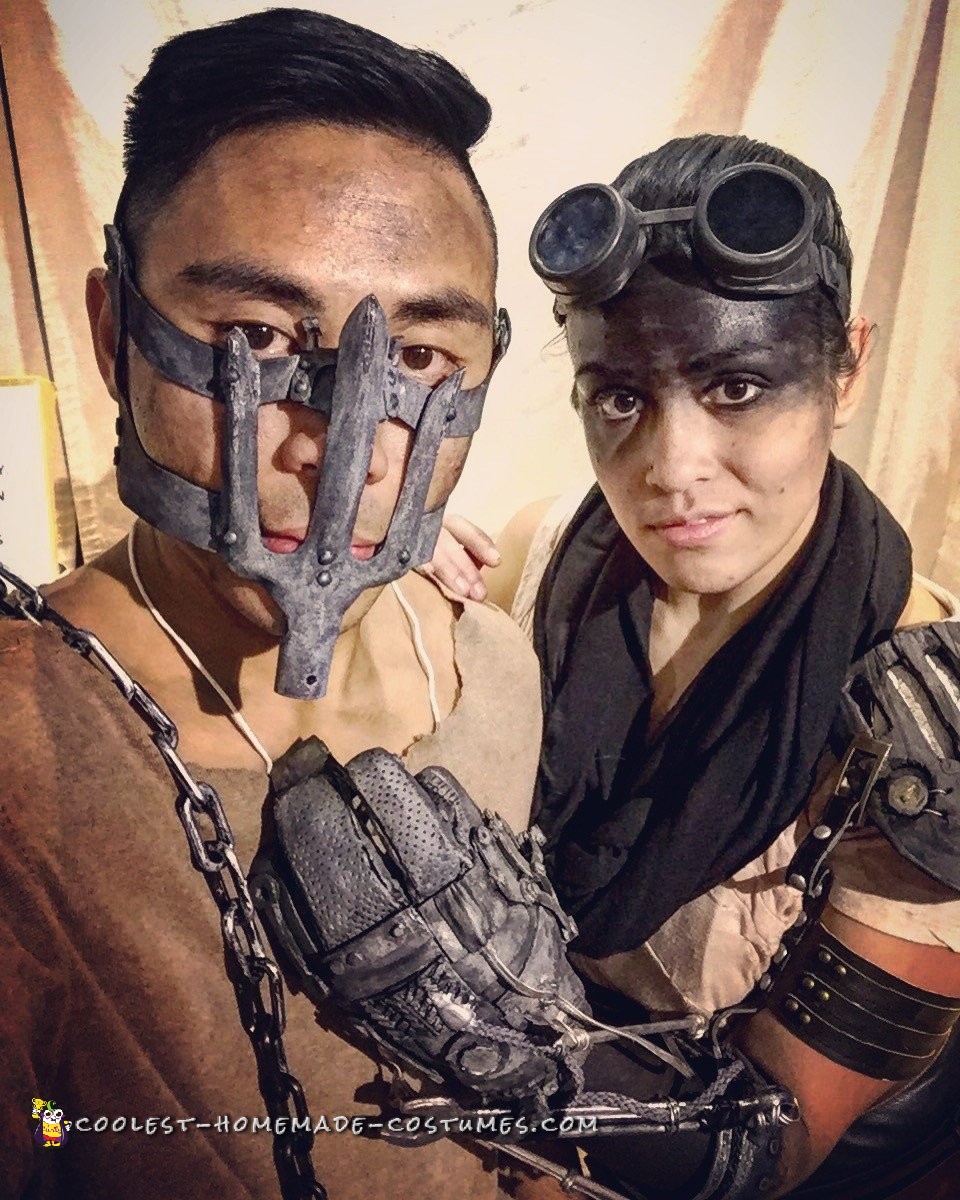 I went to the movies with my friends to see “Mad Max: Fury Road” without really knowing what the movie was about, but within 5 minutes of seeing Furiousa’s character I knew that she would be my costume that coming Halloween.

I love costume’s that you don’t just buy pieces of the rack for; I love buying materials and figuring out how to create each piece on my own. At first, her outfit seemed relatively simple (in theory) with the dirty shirt and pants, and belt corset. But the unique challenge of having to create a 4 fingers bionic arm was what really pushed me to choose this costume. As I began the costume I realized that there were more challenges to this costume than simply her bionic arm. It was tough creating the belt corset because it meant having to find enough belts of the right colour and width to suit the costume… I ended up painting some belts with acrylic paint just to get the right colour.

Several late nights, 2nd degree hot glue burns, and a bottle of metallic paint spilled across my duvet later, my costume was finally ready, just in time for Halloween.

I’m extremely grateful for my boyfriend who willingly goes along with all my crazy halloween costumes each year, even when this year’s with him as Max Rockatansky included him wearing a face mask that didn’t allow him to eat or drink anything for most of the night. This was barely made even by the fact that I couldn’t use the washroom all night without taking off half my costume in order to do so.

Everyone was really impressed with this costume, even people who hadn’t seen the movie really liked it. We wore it the day before halloween at the Anime North halloween convention and were stopped for photos throughout the night.

I’m happy to say I won 2 costume contests this year: 1st price in the Halloween Alley’s #experiencehalloween contest, and 2nd place in Value Village’s #thriftortreatcontest. But as much as winning contests is great, it’s never my sole purpose in creating them. I make costumes for the fun of it because I love the challenge and I love to wear costumes.

The first thing  created was the flaming skull belt.

I started with a piece of black craft foam that I drew the design on. Then, using a hot glue gun, I went over the design to create a raised look. Once it dried, I cut it out and painted over the background to resemble brown leather and using a mix of metallic gold and black paint, I painted the dried glue to look like aged metal.

I wasn’t able to find aged gold and silver chains for a reasonable price anywhere, so intead I bought bright, shiny gold and silver chains and soaked them in a mixture of peroxide and bleach to remove the shine and create a rusted look. The gold chains began to tarnish after just a few minutes in the mixture but the silver had to soak in a container of bleach overnight to loose it’s shine. In the end, the silver still didn’t look as aged as I had wanted so I rubbed the chains over with diluted black paint to give it the black tarnished look I was hoping for.

Once the chains were ready I cut them into varying lengths and clued them behind the skull buckle and glued the matching leather belts to it to complete this piece.

I decided to go with Max from the start of the movie when he was a blood bag wearing a metal face mask and sans his signature leather jacket.

I fashioned his mask out of black craft foam sheets, using thin metal wiring glued behind it to keep the shape needed. Each ‘bolt’ is actually just a round blob of hot glue that was painted. After a metalic paint job, the mask looked as though it was an aged metal. The chain was part of a deconstructed halloween decoration which looked authetic but was extremely light to wear.

Though it was a small detail that most didn’t notice, I was sure to include a black paracord bracelet, which Max is known to wear throughout the movie.

His shirt was a beige, long sleeve thermal top with the cuffs and neck cut out and the a pair of old ripped jeans. To achieve the ‘dirty’ look of being in a dessert, I used a combination of baby powder and cocoa powder… which left us smelling like chocolate all night long.

The shoulder pad was created from a black gardening knee pad and a woven kitchen trivet which was cut, shaped and painted to resemble Furiousa’s shoulder armour and padding. The harness was created from several leather belts and scrap pleather with glue gun blobs painted with metallic silver and gold to look like bolts and fasteners.

I had originally intended on created her shirt from wrapped pieces of linen, but the material I had bought had no stretch so I realized it would be extremely difficult to get on and off if I sewed it together. Instead, I opted for using a baggy, old, beige v-neck t-shirt, cutting apart ad sleeve and gluing the fabric together, overlapping in twisting in different directions to resemble the look of a shirt made of wrapped linens. Then I aged the shirt using cocoa powder to make it look dirty.

The leather corset was created from a sheet of pleather which I cut and inserted eyelets into so that it could be laced up. Word of advice, do not cheap out and decide not to buy the tool that secures the eyelets… it took way longer to try and nicely secure the eyelets with a pair of plyers that what it was worth from what I saved not buying that tool.

The belts had to be glue together from underneath using pieces of fabric to keep them from shifting and moving while I was wearing it. That step was actually done the night before I wore the costume out while it was actually still on my body. I also suggest avoiding hot glueing your costume while you’re still wearing it… I got a few burns from that too. But it was the easiest way to see that each part of the costume was still sitting in the right spot when being worn.

The biggest challenge of this costume was the bionic arm. Furiosa is an amputee with her left arm ending at the elbow, and her bionic arm only has 3 fingers and a thumb.

I started off with the base of a winter glove, which I cut open and removed all the insulation so I was left with just the shell of the glove. When reassembling the glove after removing the insulation I glued the middle and ring fingers together so that the hand was left with only the 3 fingers and a thumb. I added sections of craft foam piece by piece to create the look of a hand fashioned together by metal. I created different textures by using a sharp pen to engrave designs in to the foam, and even made  faux screw heads this way by cutting small circles and engraving lines and x’s into it.

Rope, wires, wooden dowels, and a real metal wrench were used to attach the hand to the harness. A mixture of metallic sliver and black paint was used to give the hand an aged metal look.

I had originally intended to wear a black arm glove to hide my actual arm, but on the day of I instead used black facepaint to give it a more seamless look, because the arm glove had a slight shine to it and would wrinkle when I’d move.

Though I seriously considered shaving my head for this costume… in the end I opted for a slicked back updo that kept my short hair neatly and tightly hidden on the back of my head (since I figured most pictures are taken from the front anyways). The googles were purchased but disassembled and repainted to look like aged metal and although they weren’t an integral part of her costume, I opted to include them as they hid my natural hair line which would be more of a giveaway showing that I didn’t actually have a buzz cut.

In the movie, her face makeup is engine grease, but I used black facepaint set with black eyeshadow (to prevent the paint from cracking on my skin).

For Max’s makeup I just used some black and brown eyeshadow all across his face/neck to give him the look of being dirty in the desert. 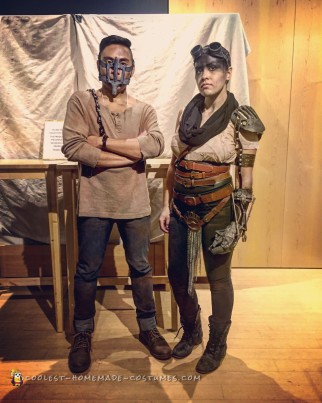 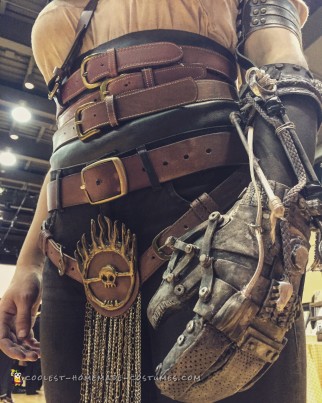 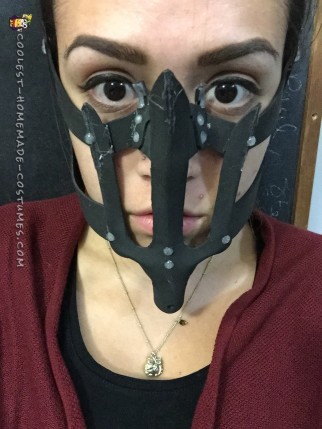 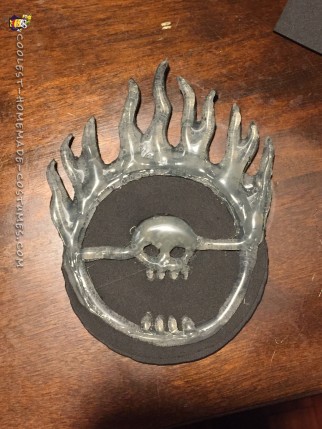 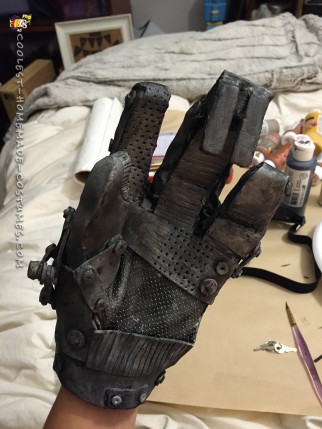 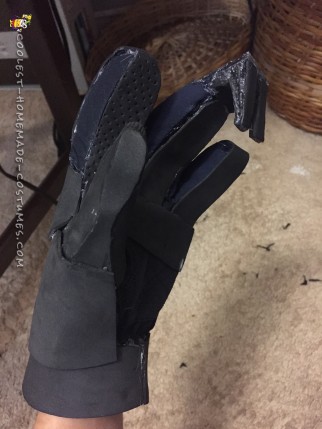 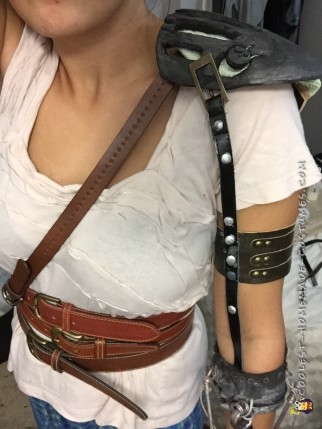 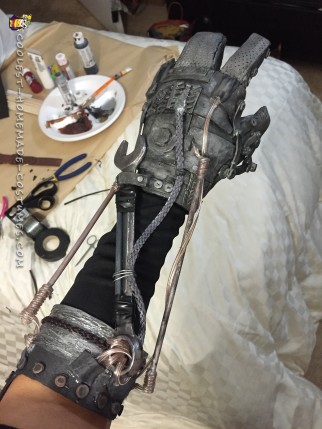 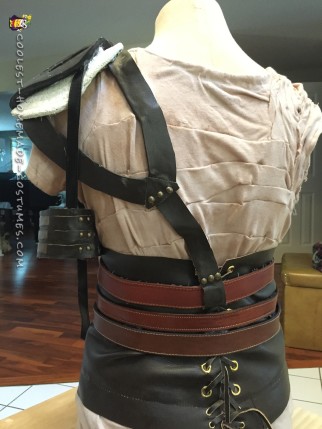