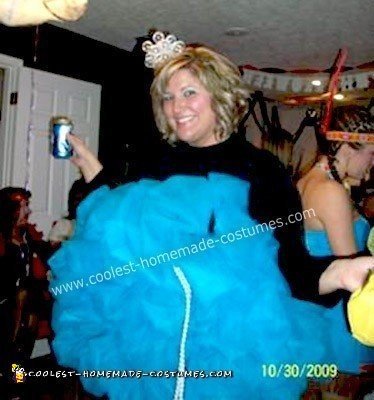 I got my idea for the Homemade Loofah Halloween Costume from this site.

I took a black tank dress, 30 yards of netting, and tons of safety pins to complete the costume. I cut the netting into large squares, stitched around the sides with a needle and thread and pulled the thread tight to gather it into a puff. Then, I took the puff and pinned in to the dress. I wore a black, long-sleeved shirt under the costume (it was cold on Halloween), black shorts and leggings.

I also took some silver heels and covered them with white, iridescent glitter. To make the bubble headpiece, I used clear, miniature Christmas balls that I found @ Hobby Lobby. I just removed the metal thingy from the top and then used e6000 glue to attach to a head band.

The costume was a huge hit! I even won a costume contest! Me and my loofah are on so many strangers’ cameras! I can’t even begin to tell you how many people just “had to have a picture with me!”