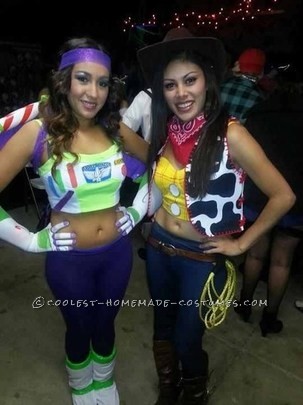 My best friend and I decided this year that we wanted something original and creative for Halloween so we decided to make costumes and be Buzz Lightyear and Woody from Toy Story. We found a lot of inspiration from this website and some from just looking at pictures of the characters.

For Woody, I bought a yellow crop top, blue leggings, brown hat,  brown boots, a red bandanna, and spurs. The vest, the holster, buttons, and sheriff badge were homemade.

My aunt (very creative and awesome!) made my vest which is made of 2 pieces of foam paper and 2 cow print bandannas with red yarn. We used a boys’ play vest as a pattern we bought from the Dollar Store, she traced and cut the foam paper, and added the cow print bandanna  initially with spray adhesive, but that didn’t work so she used regular Elmer’s glue to make it stick to the foam paper. Red yarn was added to give a more toy like look around the edges of the vest.

We also used white elastic string and foam paper to make the pull string. We would have made it interactive but when we were playing with it we found that my vest would have ripped or the string would have snapped if it was pulled too hard so we decided to glue it down to avoid both situations.

She made my holster out of brown foam paper and red yarn also. She folded the foam paper to make it look like Woody’s holster and tied the sides with red yarn. So I could close it, she added Velcro to the top folded piece and the outside of the holster. Fashionable and functional.  I didn’t have to carry a purse since we made the holster big enough to hold my phone, I.D., and a lipgloss. The holster detailing is gold and red foam paper cut, stacked and glued together. We put 2 slits on the holster so we could slide it on a brown belt she had and added yellow rope we found.

The buttons were made out of white foam paper and lined with silver Tulip fabric paint.

We bought a yellow wood star from Hobby Lobby, wrote sheriff with black Sharpie, and outlined it with the same silver Tulip fabric paint. We attached the buttons and sheriff badge with Guerilla super glue.

I spent in total $54 with my boots being the most expensive item. Woody was so fun! When we were downtown a lot of people assumed I was just a cowgirl but when we had a Trunk-or-Treat at our church all the kids knew I was from Toy Story! They would ask are you Woody or are you Jessie? And I replied back well I’m Woody but you can call me Jess since my name is Jessica. So much fun!

We bought the white and green crop top, purple leggings, wing jet pack, and Buzz gloves. The buttons and the boots were made.

We took my best friend’s top and added Buzz’s command buttons. We made them out of blue, green, and red foam paper. We used a chapstick to get the oval shapes and a Gatorade bottle top for the circle button. We printed the Space Ranger and Lightyear badges and glued them to blue and yellow foam paper. Her purple straps below the buttons were also made out of purple glitter foam paper. These were all added with Guerilla super glue. We tried using hot glue but the buttons wouldn’t stay on.

Purple tulle fabric was added for the headband.

We bought the jet pack in a child size but the elastic straps were too small. To make the straps more comfortable, we added the same purple tulle fabric we used for the headband. The boots were made out of a pair of Uggs, 4 white bandannas  and 1 roll of green duck tape. We wrapped the bandannas, one to the bottom to cover the toe and one to cover the top of the boot. We added the duck tape to look similar to Buzz’s boots and attach the bandannas  No, the boots were not harmed in this process. We made sure that the duck tape only touched the bandannas and not the boot surface. So it wouldn’t move, we safety pinned the boots on the top and taped the fabric to the bottom of the boots.

Her costume in total cost $52.39 with her wing jet pack being the most expensive item. Everyone knew who she was right away and when we were together that’s when we got a lot of compliments. Even though I had more accessories with my Woody costume, I think keeping it simple and very specific with the Buzz details was the best way to go and that’s why more people knew who she was. To make it even more Buzz and Woody, we added Andy to our boots.

Overall, we had a blast and we loved our costumes! 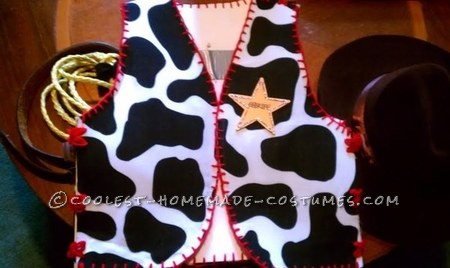 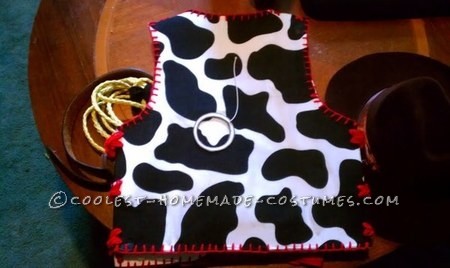 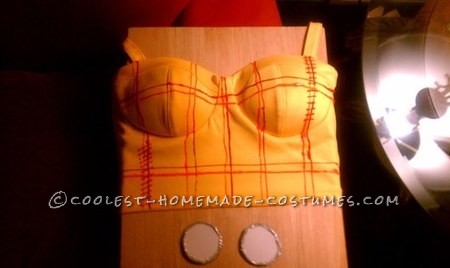 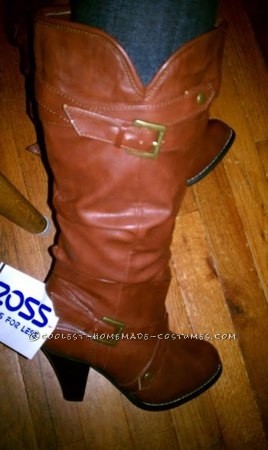 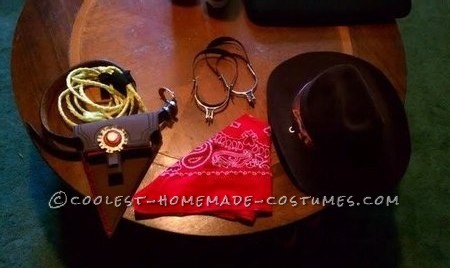 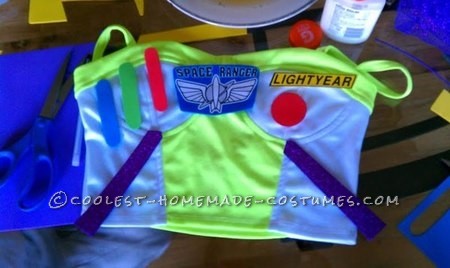 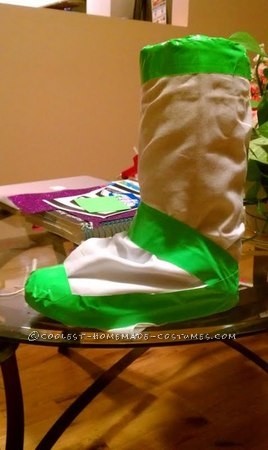 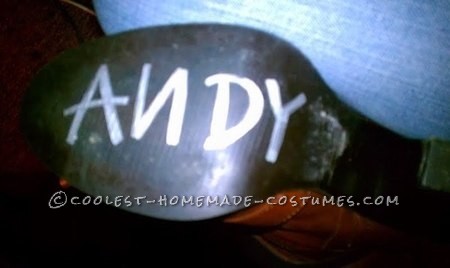 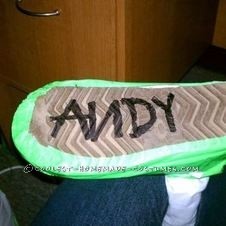