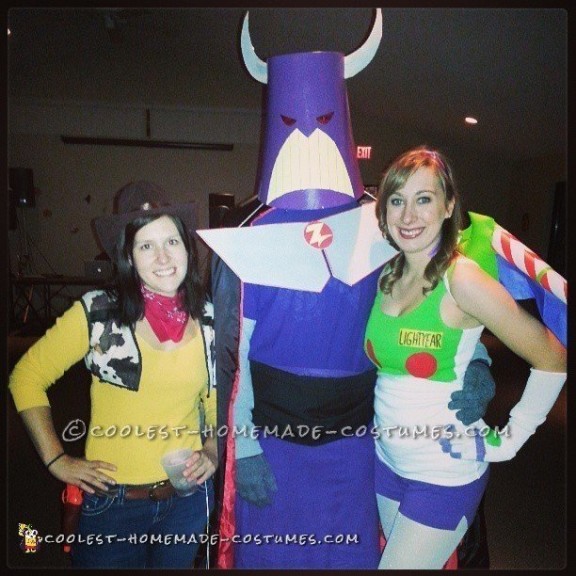 My best friend and I wanted to do a costume together so we decided to do Buzz and Woody.  Problem.  What will my boyfriend be?  He wanted to participate.  Obviously he has to be Evil Emperor Zurg!  Buzz and Woody’s costumes were pretty simple, it was Zurg who took the most time.

Buzz – This was a pair of purple shorts, white tights sprayed with body glitter, a tank top that I made, a purple headband, socks, duct tape, the inflatable wings, and white gloves.  I bought a white tank top from Old Navy and sprayed the top third green.  While that was drying, I cut out pieces of felt to resemble the buttons on his top as well as his nametag.  To make my gloves, I spray painted the purple tips of my white gloves ($1.00 at wal-mart).  I cut the toes off a pair of white tube socks, with an extra hole for my thumb, and put purple duct tape around the edge.  I also put a green square on the top of the hand to mimic Buzz’s gloves.  I wore my 2nd pair of white tube socks as my boots with a green strip of duct tape around the top and the tips of my shoes, and, of course, Andy’s name written on the bottom of my white tennis shoes.

Woody – Woody was basically a typical cowboy outfit.  She went to the store and purchased a child’s cowboy costume consisting of a vest, a hat, and a gun.  She wore a yellow shirt, a red bandana, jeans, and boots.  She has a pull string on the back of her shirt consisting of a retractable badge holder (to make it go back to her shirt) and a ring she found at a craft  store.

Emperor Zurg – Now for the most challenging.  The outfit consisted of a long sleeved gray shirt, a short sleeved purple shirt, a purple blanket wrapped up to make a skirt, and gray gloves.  He just wore regular tennis shoes since they weren’t seen.  He found a black cape online with a red lining and fashioned a black middle piece out of a piece of black fabric.  His helmet is a trash can painted purple.  Eye holes were cut out and clear red plastic was put behind the holes.  His mouth was painted on and his horns were cut out of sturdy cardboard and glued to the side of his head.  His chest piece was also made out of sturdy cardboard, cut, and painted, with the red and yellow Z attached.

Surprisingly, everyone knew who we were and we had an epic duel in the middle of the dance floor.  It was an awesome night. 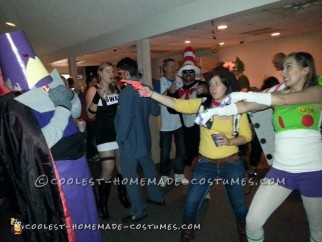 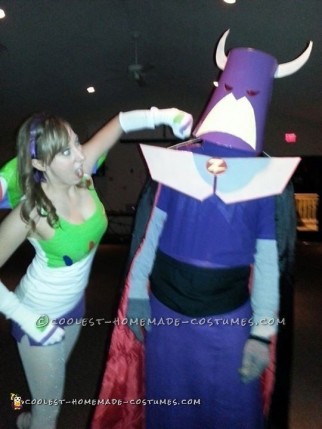 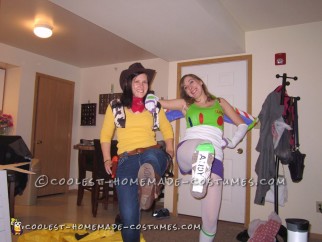 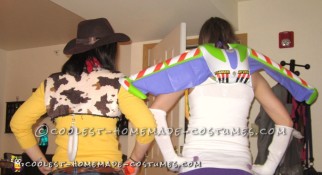