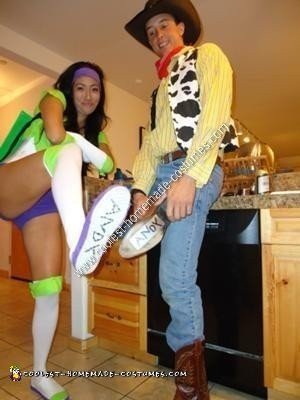 I got the idea to be Buzz Lightyear for Halloween from all the hype from the new Toy Story 3 movie, and thought it’d be a fun costume. When I told my friend about my idea he said, “well if you’re Buzz I’ll be your Woody! I already look like him anyway!” (since he’s a tall skinny guy).

Making Woody’s costume was really easy since he already had most of the costume, the yellow shirt, jeans, bandanna, cowboy boots, and belt buckle. We went out and got a sheriff badge, toy gun and holster, and cowboy hat. Since I sew I told him I’d make his his cowprint vest. He went to a thrift store and got a cheap vest, and I went to the fabric store and got cowprint fabric and sewed on the fabric to the vest.

Since I made his vest he told me he would make my Buzz Lightyear wings (since he’s a carpenter. That was the hardest part of my costume). He used really thin wood so they wouldn’t be heavy to carry, screwed them together at the top inner corners of the wings with washers so they’d be able to move, then used string and a pivot so they’d be able to move up and down with the pull of the string. Pretty easy, the hardest part was cutting out the pieces.

Then he spray painted them the same colors, and fanned and hair dry them dried while I was sewing the other stuff. I already had a white top and purple shorts. For my gloves I bought long white socks and cut the toes off and a side hole (for my thumb so they could stay on) and bought stockings and added green fabric to the ends of both of them.

I also added green and purple fabric to my shoes the exact same as Buzz. For the top I cut out a green crop top from the fabric I got and pinned the sides so it was fitted. I cut out different colored felt for the buttons on Buzz’s shirt and wrote out “Lightyear” on the front. For my headband I just cut a long strip of my purple fabric.

Last but not least we wrote with a sharpie the name “Andy” on the bottom of our right shoes. Both our homemade Woody and Buzz Lightyear couple costumes combined, I would say cost us around $40 dollars, which was well worth it since we were the talk of the night, everybody loved our outfits, and even random people wanted to take pictures with us. But the best part of the outfits were definitely the wings! Check ’em out! 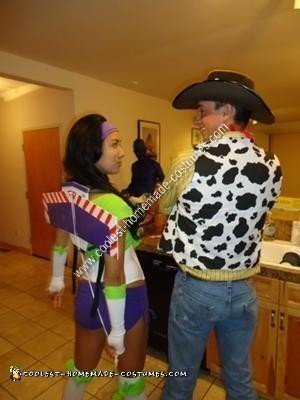 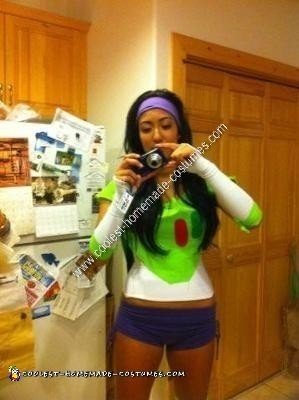 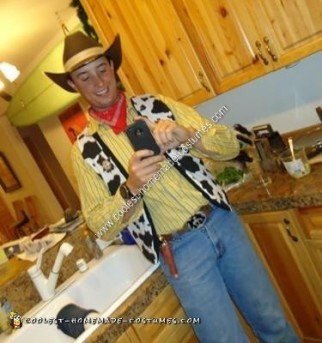