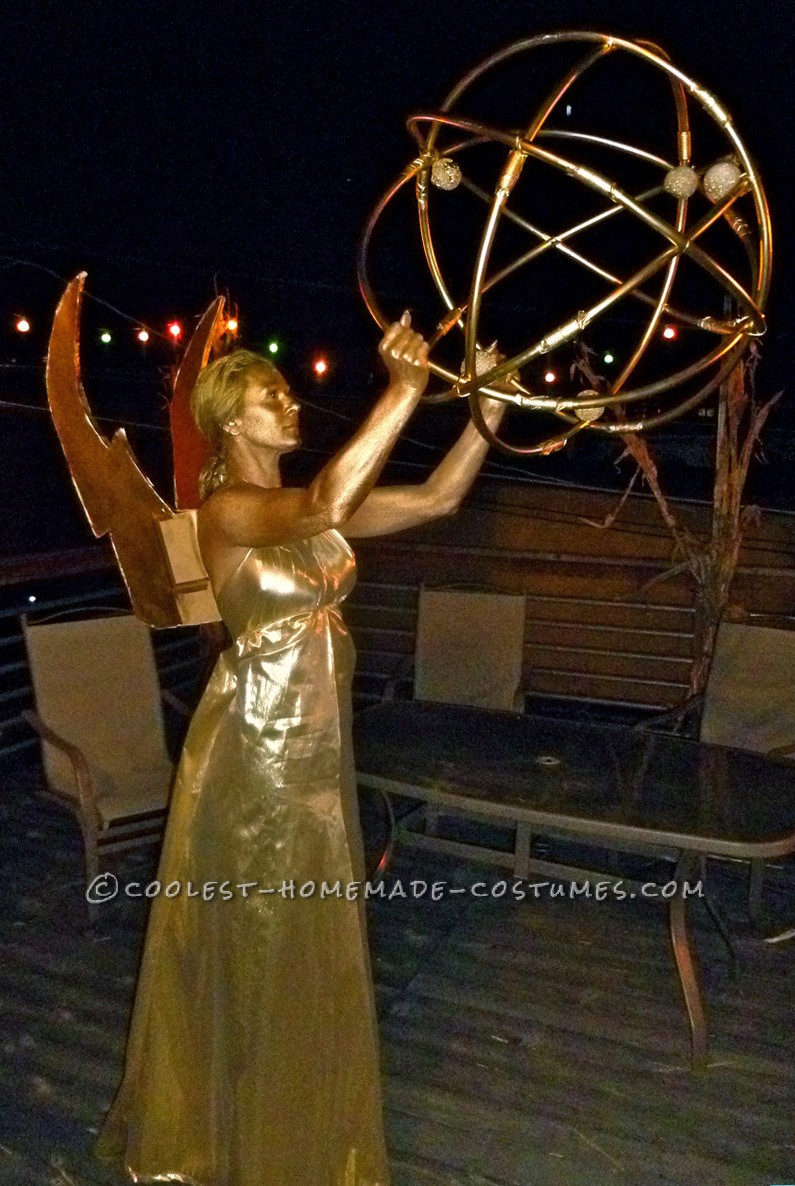 My husband has a few of these awards lying around (he is a television camera operator) and I thought it a great idea to go as an “Emmy”. But just like all costumes on this website, it just takes time and patience.

I started off by researching the length of the dress (floor length) and decided that a gold lame would be the right color. With a full time job I didn’t have enough time to buy the fabric, sew and cut the dress. So I dropped by the Halloween rental store and spoke to the head seamstress about what I was looking for…..a sort of “Marilyn Monroe” halter top style that is floor length. After a measuring she took the job on for $50.  She was going to add it to their rental costumes after I returned it.

I then consulted the costume shop on gold body paint. The main thing you want to avoid is paint that comes off when you sweat or if someone touches you. I bought a powdered mix that combines with a liquid seal. You should consult the label if you are allergic or have sensitive skin. I did a test application (ALWAYS A MUST) to see if the paint runs, cracks, flakes or gives me a rash. I bought paint brushes at fabric/art & crafts store so I could cover a lot of area such as my back and arms. While getting smaller brushes to work around my eyes and lips. I found gold lipstick at a Target but you could get it at Walgreens/Osco pharmacy as well. Gold sandals were an easy find. 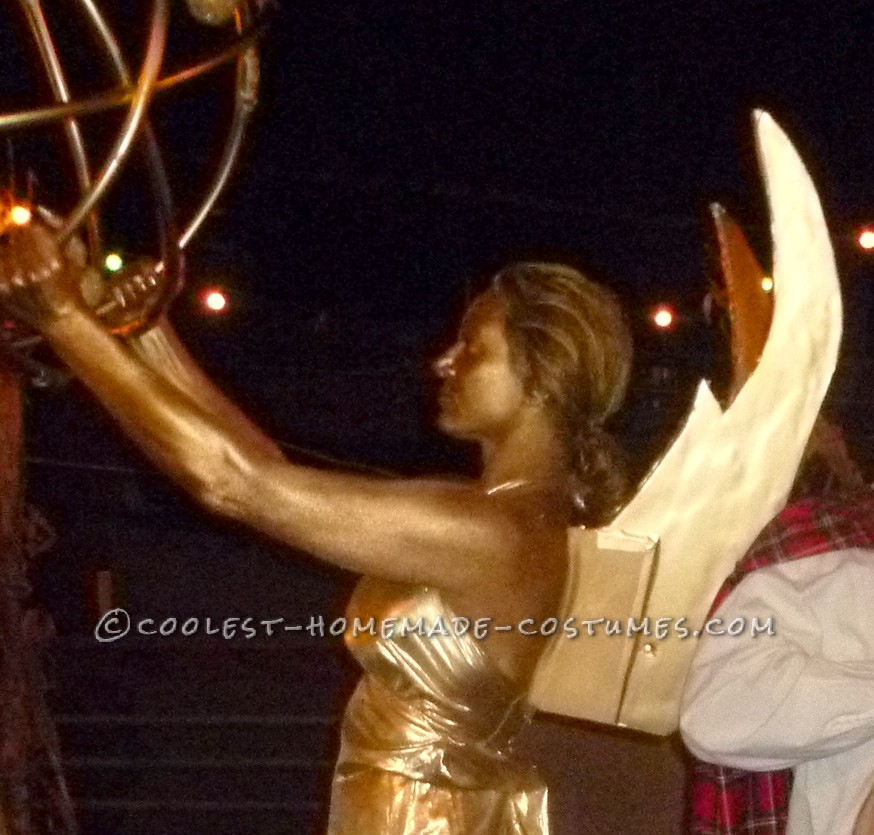 For the globe, my husband bought 5 kids size hula hoops (they make adult sized ones). He then tie-wrapped/zip tied them together. Each crossing of the hoops needed 4 or 5 ties. After securing them all tightly, take wire cutters or scissors and trim the excess away. He then put a bit of duck tape over the tie ends to keep me from cutting my hands (they tend to be rather sharp) and took 2 cans of Gold Spray Paint (make sure it will stick to plastic) and coated the globe. An Emmy also has “atoms” flying around the inside of the globe. He bought 5 and glued them where the largest number of tie wraps/zip ties were located on the globe. Gold spray paint finished them off.

The biggest pain was the wings. The had to be sturdy but not too binding. Here we took two sheets of foam core and hand drew one wing. Then after box cutting out the pattern, over layed it on the other foam core sheet so they matched and cut again. 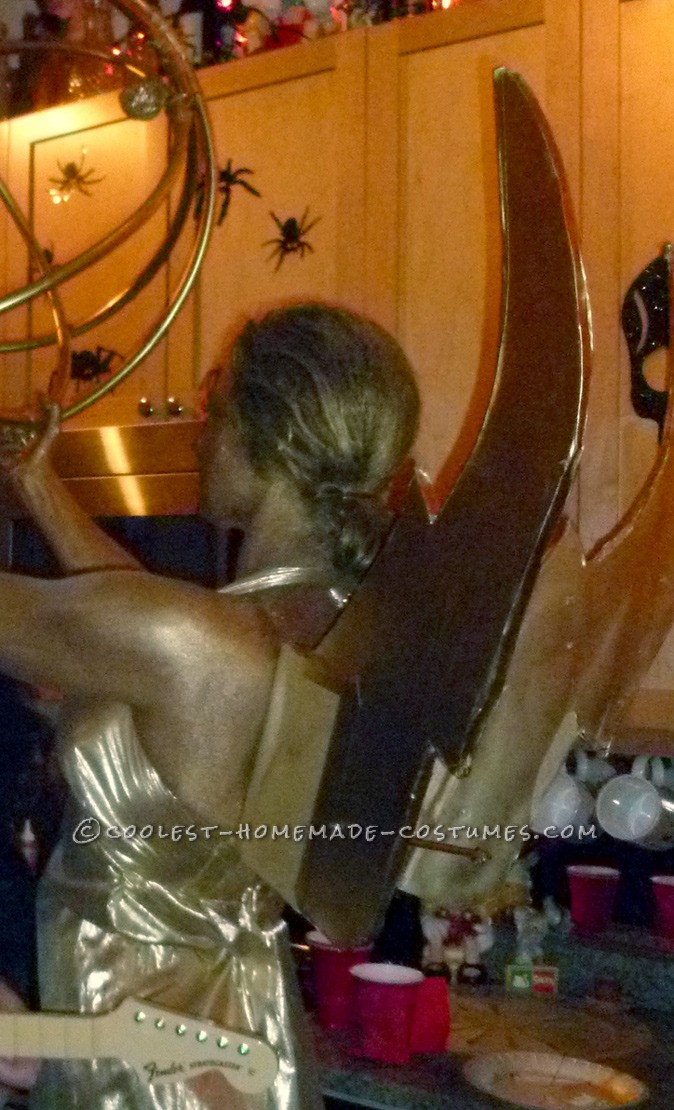 Once again the arts & crafts store has all you need.  MICHAEL’S OR JOANNE’S fabric craft stores are easiest to find here in Chicago. We picked up some clear plastic bra extensions there as well. This was to secure the wings to my torso and shoulders. The straps would run over both my shoulders like a backpack and I would also have a strap running underneath my breasts and attaching to the two “backpack” straps. Due to the size of the wings you couldn’t glue the straps to the foam core. It was too heavy. We toyed with the idea of staples but that is rubbing on your bare skin. So we purchased a light flexible foam paper. I don’t know what it is called but MICHAEL’S had it and it was in the construction paper area ( I think they use it for kids projects).

We glued the foam paper around the wings where they would be touching my shoulder blades. Think of a hard back book and where the pages would be that would be the wing. The cover is the light foam paper folded like a taco over that wing area. HOPE THIS MAKES SENSE!

Leave a pencil size thick gap to fit thread your straps thru….you are setting this all up so the wings are your “backpack”. Another can or two of gold spray paint on the wings and then used gold HAIR spray paint to do my hairdo that I had secured with couple of barrettes. 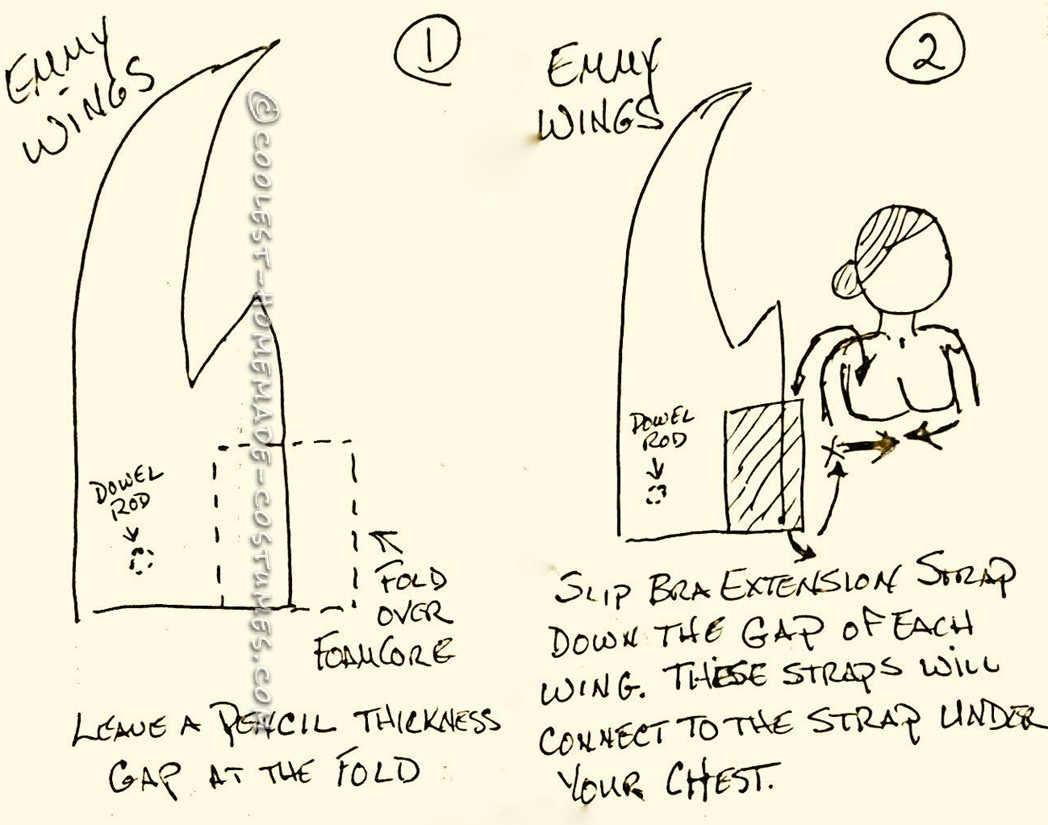 VOILA! Emmy……we worked a couple of hours a day for about 4 days to get this right. It went over really big and everyone loved the creativity. The one thing we changed at the last minute was the wings “flopped” a lot because they were not secured to each other, like two loose rudders on the back of a boat LOL To fix this issue, we took a wooden dowel rod, painted it gold and stuck it thru the wings near my shoulder blades. Sheared the excess lenght off and glued. This steadied the two wings so if they did “flop” they did so in the same fashion….

You may be able to come up with a better way to secure the Emmy wings but this worked well for the most part.