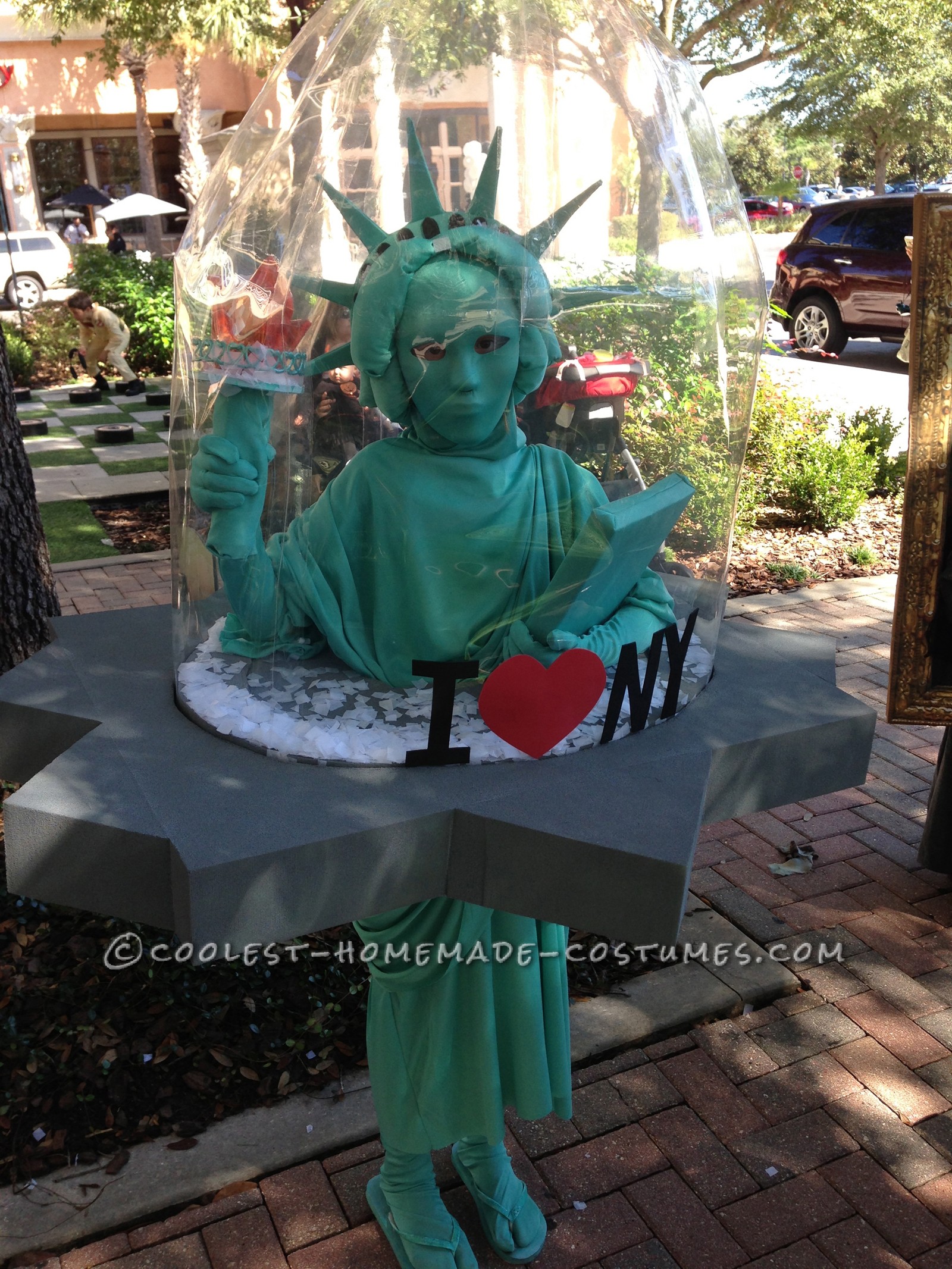 We love New York City and wanted to honor it by creating a larger-than-life replica of a favorite souvenir, a Statue of Liberty Snow Globe.  We knew it was going to be difficult but we felt up to the challenge.

The first issue was the snow globe itself.  For the dome we used three large sheets of acetate. We cut the top of the sheets to allow them to fold in to a center point then used packing tape to secure all seams.  Once secure, we cut a 6″ hole in the top of the dome to allow for better ventilation and to give us a way to feed candy into the completed costume :)

For the base of the globe we cut a large piece of 4″ green upholstery foam into form of the star-shaped fort upon which the actual statue is built. In the center of this we cut a small hole just large enough for our daughter to squeeze into.  This hole needed to be snug so it could properly support and balance the weight of the completed snow globe.  The next step was to place the dome onto the foam base and trace the outline of the dome onto the foam.  This was cut out to form an inner plug.  Then a 3″ ring was cut from this inner plug.  This ring was glued into the acetate dome.  Then the outer foam base and the inner-inner plug were attached to a rigid foam base.  This, admittedly complicated arrangement allowed us to remove the dome separately from the base of the globe whenever we needed to.

For the Statue costume our daughter would wear inside the snow globe we knew we wanted it to be as statue-like as possible so we wanted to cover as much of the exposed surfaces with the same fabric as possible.  We first made a basic toga inspired by Lady Liberty’s outfit. For the head we made a basic mask from a plain plastic face mask and a headpiece from Foss Shape.  This was all covered in the same fabric as the toga.  We then added hair by attaching roles of the green fabric to the headpiece.  The crown was made from a piece of craft foam covered in the same fabric.

For the tablet we covered a cardboard box in the green fabric then glued craft foam letters to it.  We had to paint the letters to get them to match the fabric.  Just for fun, in addition to the proper inscription on the tablet we added “trick or treat” to the back side.

The torch was built from a flashlight covered in a fabric sheath.  The flame was built by creating a form from a plastic soda cup which we then covered in orange theatrical lighting gel.  For the railing around the torch we cut a small strip of acetate and used a paint pen to draw a filigree pattern.

After assembling the entire costume all we had to do was add some snow flakes cut from white tissue paper by dropping it in through the hole in the top of the dome. 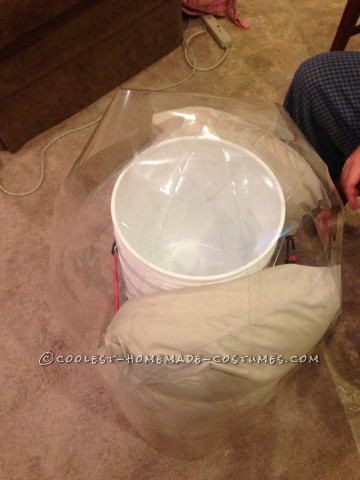 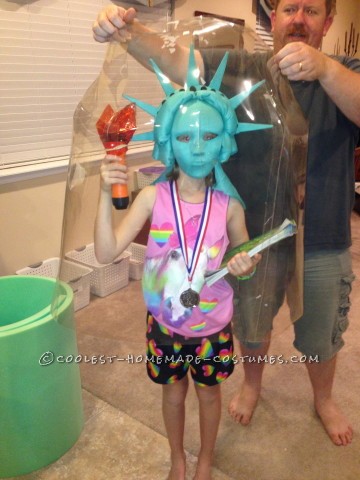 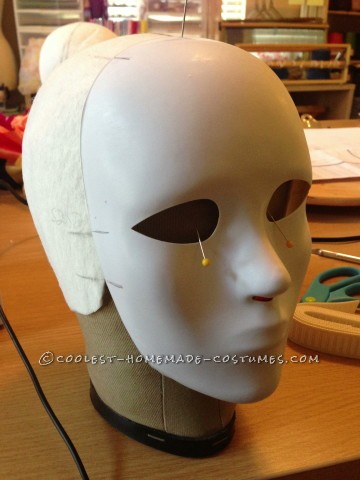 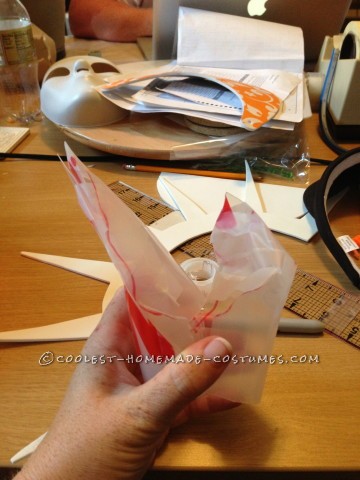 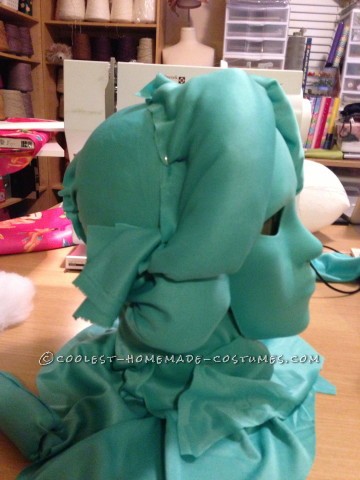 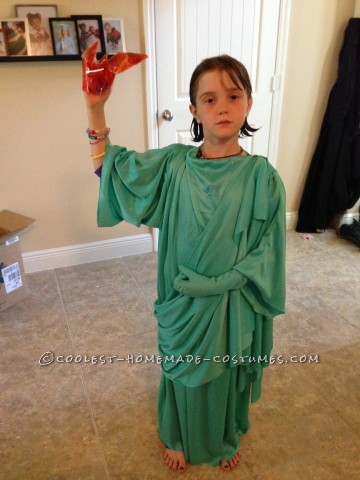 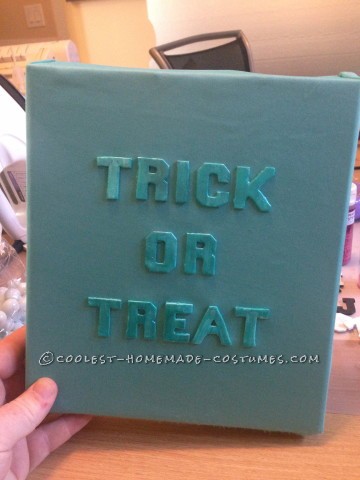 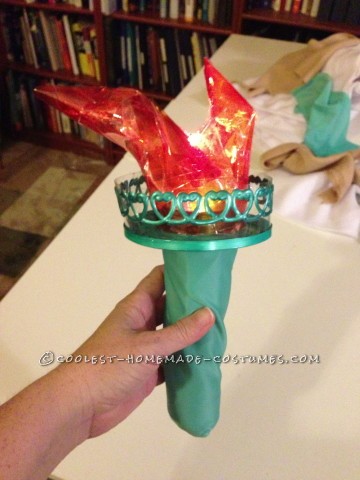 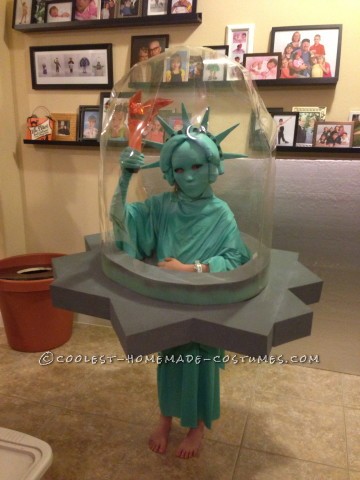