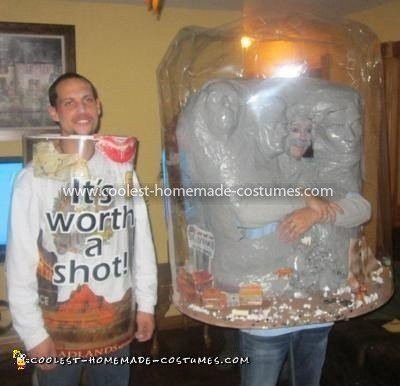 Well the idea for this Homemade South Dakota Snow Globe Costume came from a picture I saw on the internet of a little girl who was a Hawaiian snowglobe. I thought, “Hmmm, I should see what I can come up with to be a South Dakota snowglobe!” The obvious choice was to involve Mt. Rushmore.

So I made the base out of chicken wire and paper mache, ordered presidential masks online, cut holes for their faces (and mine, I subbed in for teddy) and painted them gray. That was the easy part. The hardest part was cutting the acetate bubble to go around the costume for the “globe” part of it.

The inside had 3 main elements. 1) Mt. Rushmore 2) the old western town of Deadwood, which was made of a printed out old west town that I found online, and 3) Badlands National Park, created from newspaper.

Adding animals and people was just an added detail bonus to this snowglobe. We cut holes for my arms to go through, and this is also where the glitter and “snow” came from as my costume was being judged. It adds a very “cute” appeal to the costume if you throw glitter and snow while walking around. I tried using a little hand operated fan to blow my snow around, but it just ended up sending all of it around the sides of the globe to the back of the costume.

The rear of the costume was made from the rear end of dolls, they were sewn and then zip tied to the chicken wire. This plays on the joke that if you “drive around the back of Mt. Rushmore, you can see their rear ends sticking out on the other side”

I hope this inspires some to take on the snowglobe idea, and feature their home states in any way possible. 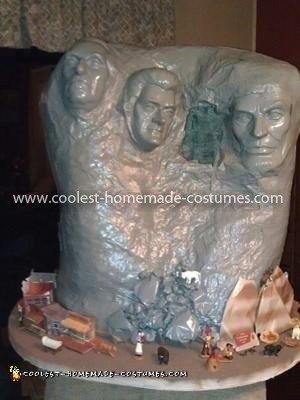 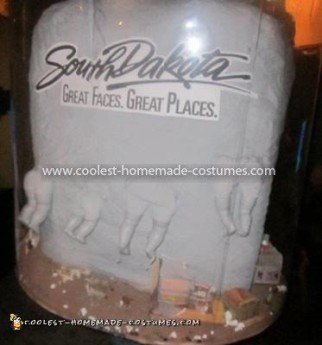 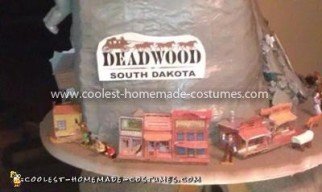