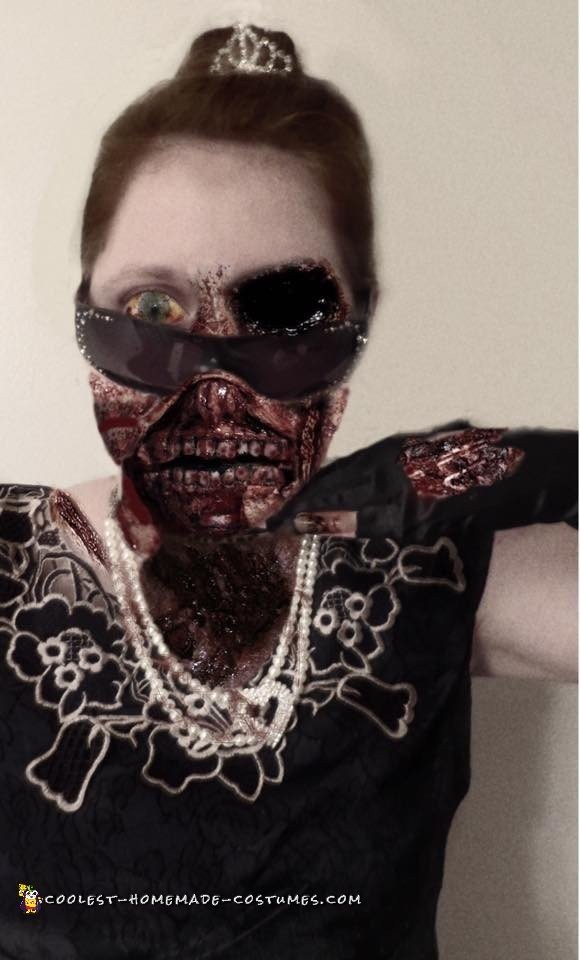 This was definitely the most involved costume I’ve ever put together.

First off, my dress was made by a dear friend who is a hobby seamstress. It was originally made for a school event so I promised not to tear it or muck it up for the sake of looking more zombie-like, so I let my Zombie makeup do the talking! Five hours and ounces upon ounces of liquid latex and layers of tissue later, I created my Zombie look!

Here’s How:
First, I created my prosthetic jaw. This was made with liquid latex, tissues, craft glue and hot glue, and artificial nails. It’s sort of like paper mache in that you take tissue and coat it with latex and do several layers until it’s thick enough to support itself. I did seven to be safe. Making a Zombie Costume is as hard as being a Zombie.

To dry, I took a hairdryer on low and made sure the latex turned hard and white before peeling it off. Then I added the fake nails for teeth by stuffing the backs of them with tissue and super gluing them to the jaw while it was on my face – I do not recommend this – I kind of burnt my mouth a little. When this was ready, I covered my mouth and nose with latex and tissue, let it dry, and tore it open in the middle to stuff the jaws in  underneath and attach with glue then cover with concealer to make it skin-tone.

When this was ready, I covered my mouth and nose with latex and tissue, let it dry, and tore it open in the middle to stuff the jaws in underneath and attach with glue then cover with concealer to make it skin-tone.

I did the same method for my exposed-tendon hand, paper mache technique, then attached Q-tips with the tips cut off to look like the tendons, then I layered the latex and tissue and tussled it to look like my Zombie skin got torn apart on my hand, then added the fake blood.

For the eyes – I got a special contact (no prescription sadly so I was blind as ever since my other eye was covered up with a cardboard cutout and electrical tape to look like it was missing). To make the Zombie gouged out eye look, I took a cardboard cut out, covered it in electrical tape and black makeup and used latex around my eye to give my skin a torn up effect too and to secure the cardboard in place.

I made sure to eat well before putting my Zombie Costume on for the night since the best I could do with my mouth was drink through bar straws. I tried to avoid my father since he is deathly afraid of zombies and would have probably shot me, but he saw my photos on Facebook after the fact and couldn’t understand why “such a cute girl would ugly herself up like that.”

I definitely gave him the creeps. I also made a co-worker gag with all of the gore when I showed her my pictures at work the next day. So I consider this my greatest masterpiece and a great success.

Overall, it was a very fun and hilarious night!