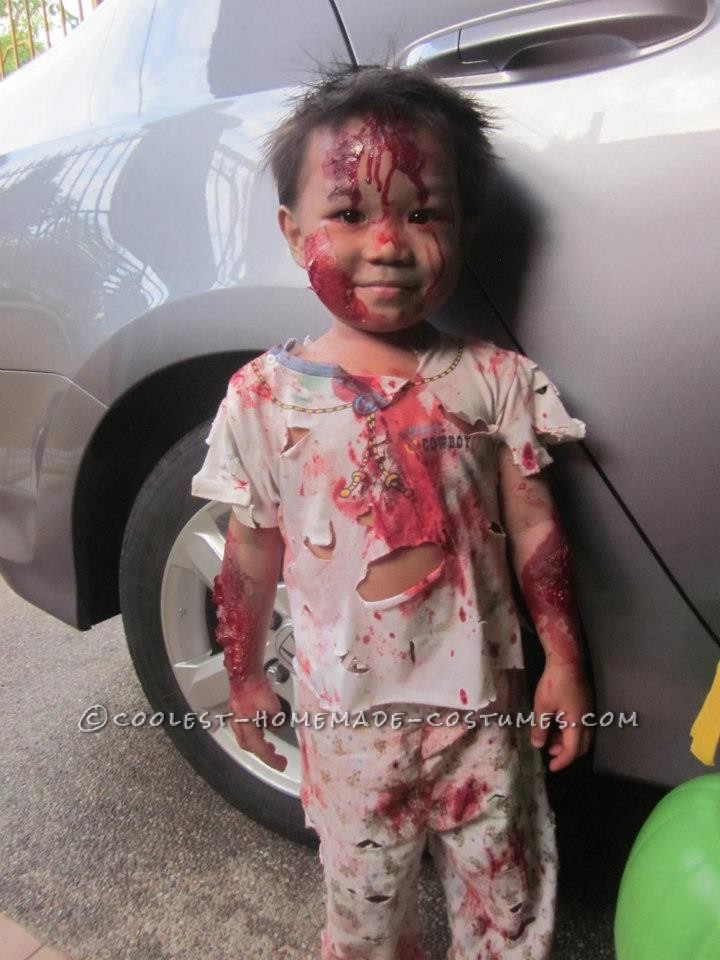 I’ve researched the ideas online on how to do fake wounds and fake blood. I started learning the techniques first week of October. Yes I know! I was  so excited to do the zombie baby,  me and my son practiced a lot so he can get used to it.  Luckily he is not scared of blood and even scary images so it is quite easy, actually. he loves being scary, he enjoyed it!

For  his zombie clothes, I used his own clothes, tore them and stained with ink of pen, colors red, green and black. For the clothes to have an old and dirty effect I soaked it in a cup of coffee and let it dry for days. Once it dried out I used some fake blood which I made to make a bloody effect.  We also prepared his white shoes, we added the same trick on the shoes to make it dirty and bloody.

At first, I was planning to make a wound that looks like his teeth at the side of his mouth are showing, but it so hard to make a 2yr old boy still for an hour just to have his makeup done, so forget that. What I did is, I make some open wound on his cheeks, 2 gunshot wound on his forehead, a bite mark on his left hand and a long laceration on the right arm. To have a wound effect I used tissue and glue. I just glued the tissue, and make a wound like image.

After the glue dried up I used my size o.5 crochet needle to tear the middle part of the wound so that it will look like as if the wound is open and have flesh coming out. For large wounds, I inserted a tissue that is soaked in red food coloring to make it look like wound flesh. For the skin I put some white foundation so his skin will look pale and some green and black for zombie skin effect.

For the fake blood, I made sure it is edible, cause we know how babies curiosity is, right?

I used red food coloring, corn syrup (to make it thicker), chocolate powder (for darker shade), cornstarch (just in case you want it to be thicker). Just mix all the ingredients together then Ta Dah! you now have fake blood that smells good and taste ummmmm yummy!

After Makeup and Dressing up

So, makeup is done, what you need to do is add the bloody effects. First, get a cup then pour some red food coloring, then grab a sponge, dip the sponge then put some food coloring on the wounds, but not too much just paint it with red. Next, get the fake blood mix, get a teaspoon then put some fake blood on the wound. It’s much better if he is standing so the blood will drip down.

Things to bring with you when you go

I started to make the wound on both arms, and made up his whole body while he was having a siesta, but he got irritated when I glued some on his face so he then woke up. His first word?  Scary!? Then he sat down and watched me do the makeup. Luckily he was still sleepy, so he did not move that much. I dressed him up before he went to sleep so the make up will not be ruined. Things got a little messy when I put some fake blood on his wounds coz he is so excited to go out and scare other kids.

Most of the kids at the Halloween costume party cried and ran cause they were so scared. The funny thing is, even 5 yr old kids are running and very scared of him, and my son is running after them while I’m chasing him. Very tiring yet exciting. And all the hard work was replaced cause he won best in Halloween costume. yey!