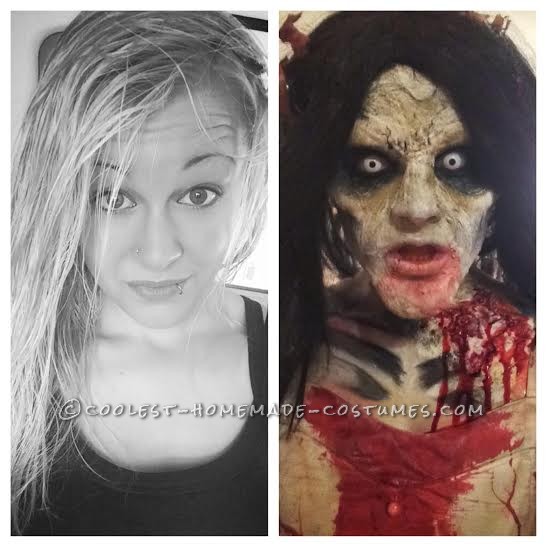 Hey guys! My name is Alexandra. I’m a Cosmetologist, Artist, and Musician from Central Illinois. I’m a huge Walking Dead fan. I’m extremely intrigued by the amount of art and effort put into the making of the show. I decided to turn my obsession into a reality this year for Halloween! Instead of being a sexy nurse or Elsa from Frozen, I decided to transform myself into a terrifying Zombie.

The video I’ve attached is a video response to on of my bandmates in a group text. He showed us a silly video of his costume for our Halloween shows (We were all Captain America). They all freaked out a little, hehe.

I started preparing for the costume weeks in advance. I had never attempted a special effects makeup before so I wanted to make sure I had all the materials I needed. With it being such a passion of mine, I was hoping I wouldn’t fail at the execution and that the money would be well spent. I spent around $300 on everything. (I’ve never spent so much to look so terrible!) The costume may be homemade, but I needed a lot to make it. I bought clothing and a wig I could trash, foam latex facial prosthetics, white out contacts, and a ridiculous amount of makeup. When I was buying the makeup at a local Halloween store, the cashier asked, “You putting on a production?” My answer was, “Yes, on myself!”

First I started on the dress. I took a plain white dress and started by staining it. I put it in a huge cooking pot and drenched it with a pot of coffee so it looked aged. It came out just as I wanted it to. Luckily the hazelnut fragrance faded within a few days. Then came the blood! I wanted the blood to look real. The “theatrical” blood you can buy at any Halloween store looks neat and real for the first 10 minutes. Then as it dries it becomes lighter. The opposite of real blood! I decided to do an experiment. I use a lot of Mod Podge on my art projects at home. I took the gloss finish Mod Podge and mixed it with a burnt red acrylic paint. I was so happy with the outcome! The color looked milky once I mixed it, but as it dried it was perfect. It dried the exact color of the paint and was gloopy and shiny! The drier it got, the darker and wetter it looked. I was thrilled.

The day I was working on it we had a few guys in our yard we hired to cut down some dead trees. I imagine I looked crazy rubbing blood all over this thing. I was grabbing the dress to create handprints, throwing the fake blood on it to create splatter marks, and carefully painting the neckline with a paintbrush to make sure the paint was most saturated in this area. Not only that, but I was throwing it in the dirt, stepping all over it, and vigorously rubbing it into the ground. I didn’t know these guys. But their facial expressions lead me to believe they didn’t have any desire to get to know me.

Then came the wig! I bought a long black wig that I intended to trash. Although it was called a “Witch Wig,” it was way to pretty. It was shiny and thick. I started with my shears and thinned it out so the ends looked tattered and gross. I then put baby powder all over it to give it a dusty, dirty look opposed to the shiny plastic. I also used several different hair products to create knots and clumps. Then I got out the hot glue gun and went to work! I found old, dried out leaves, twigs, and fake moss and hot glued them into the wig so they couldn’t fall out.

At this point my costume preparation was complete and game day came. I only had one shot to make this costume right since the prosthetics I purchased are a one use deal. I spent 4 hours on my makeup from head to toe. I tried to apply everything I’ve learned from behind the scenes Walking Dead makeup shows and one of my favorite TV shows, Face Off. I paid close attention to detail. I had printed pages of different zombies laid all around me for reference. I hand made my wounds and zombie bite with liquid latex and toilet paper. I spent time making sure my coloring, shading, and textures were done best to my ability. The more I worked the more excited I got. I was looking better (or worse) by the minute. When my boyfriend showed up a few hours later, he was in complete shock. He struggled looking at me and cringed every time I asked him for a kiss! I was so excited to show everyone my work and hoping that all my preparation and time would pay off as entertainment and fun for others as well.

We went to a local rock show being held for a fundraiser in Champaign, IL. A lot of my coworkers and friends planned on going as well. The ride over slightly prepared me for what was to come. We had every McDonalds worker huddled at the drive through window taking pictures while we waited for our cheeseburgers, women and children jumping at the site of me, and the receptionist at our hotel asking for a picture and praising my work.

We walked into the club and I immediately walked straight up to one of my best friends and coworker. I ran over and said hey to her but she looked at me like she had never seen me before. It took about 10 seconds for me to realize that she literally had no idea who I was! This happened ALL NIGHT. No one had a clue. This was crazy for me. I’m a well-known musician in Champaign. I play bass and sing in a traveling pop/rock band called The Brat Pack. We play this club all the time! To be so hidden was such a fun and hilarious feeling. People simply couldn’t believe it. I felt accomplished

All night people asked for pictures, asked how I did it, asked how long it took, and praised my use of detail throughout the costume. My wounds, the leaves in my hair, my dry but wet looking blood, the change in bone structure.. they noticed it all. Bret Michaels from Poison was supposed to be an act that evening but unfortunately had to cancel due to sickness. His band still came out to support our fundraiser. The band loved my costume! They were taking pictures and sending them to their friends and wives. There were certain people who honestly couldn’t even look at me. They’d apologize and scurry the other way. I couldn’t go to the bathroom without girls asking to take selfies with me. I didn’t regret a single penny or choice I had made. My life is entertainment, so to bring that fun to others is the best thing I could ask for.

My boyfriend went as Rick Grimes from The Walking Dead. We were definitely the highlight of the evening. We were the last to go up for the costume contest which was based off of crowd cheer. Everyone got some claps and screams but when we went up as the last contestants, the place went CRAZY! Everyone came out of their seats and gave everything they had. To feel that energy and have so many people enjoy all the hard work that went into this costume was so rewarding. I’ll never forget how great it felt to be a ZOMBIE! We used our cash prize of $50 to pay for a celebratory lunch the next day.

As fun as the day was, I was ready to get this junk off of me. I thought the application was hard?! Oh my gosh. Taking this stuff off was a whole other story! With the help of my boyfriend, it an hour to get all the gunk off. I had glue, blood, paint, and latex stuck in my hair and skin! At one point I was vigorously brushing the teeth stain off while he was picking glue out of my hair like a monkey. He even screamed, “We’re gonna get through this!” I’ve never been so happy to shower in my life.

Thank you so much for reading about my Walking Dead Zombie adventure! I hope you enjoy the costume. I’m excited to have the opportunity to show you and others my work. It was very short lived so it’s awesome to have this chance to let it live even if just a little longer. Cheers! 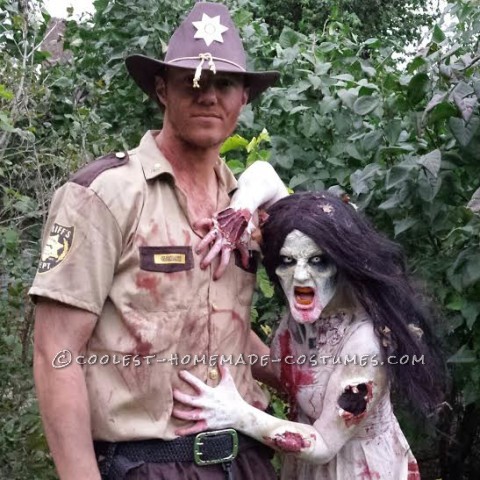 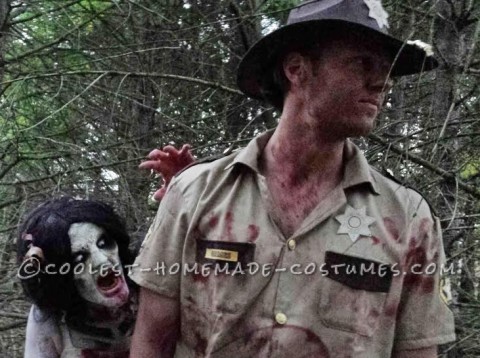 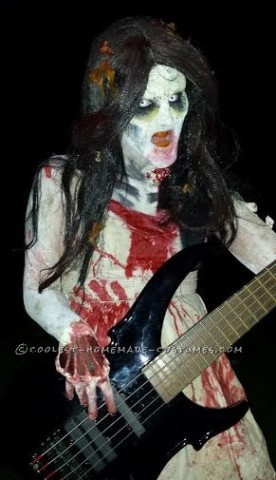 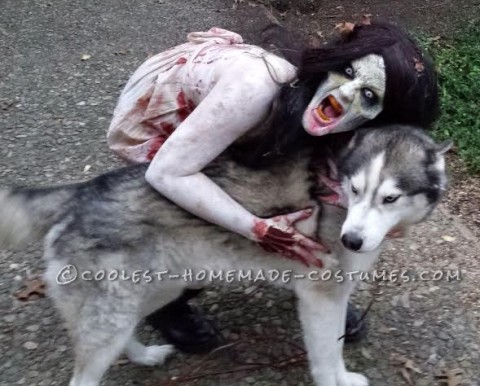 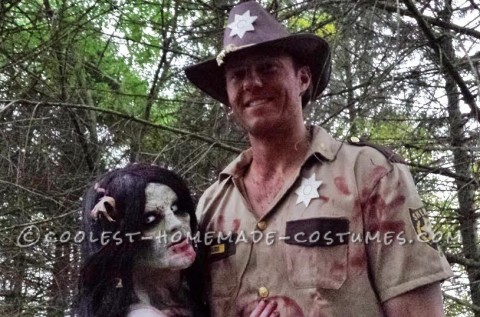 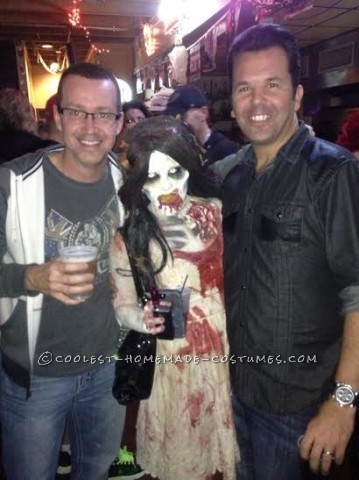 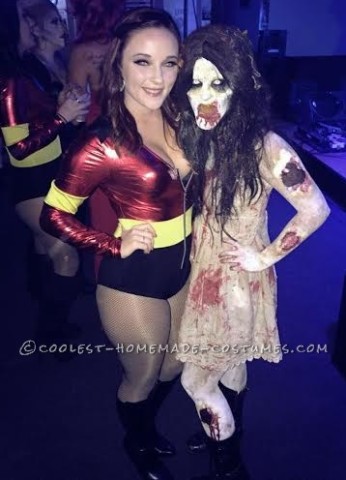 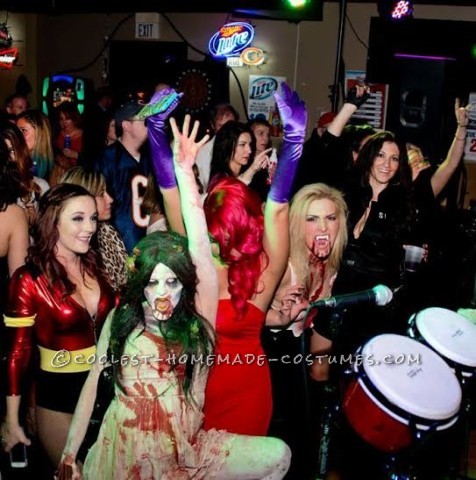 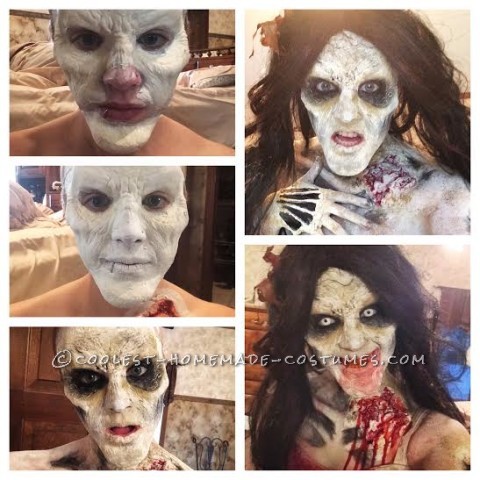