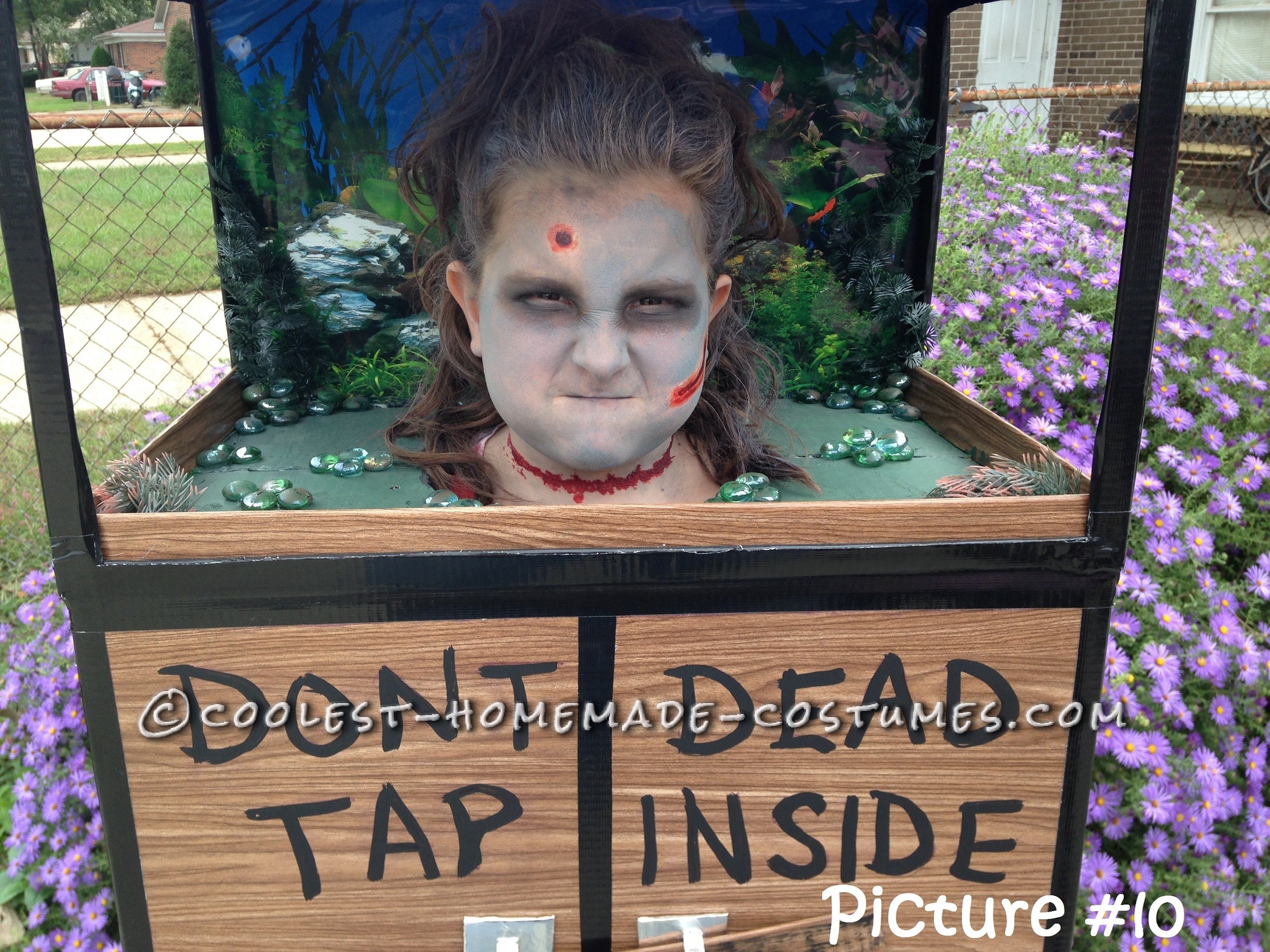 So this costume started off with my seven year old really wanting to be Anna or Elsa from Frozen. I told her that there would be a million and one of them and she needed to be something more original and maybe something scary. So I went looking around on this site and found a fish tank costume, and I thought it would be the cutest thing for her. So I was trying to make it something more original and thought I would do a ‘Finding Nemo’ themed tank, and she liked that idea. So I went on to find some neat things to put in it. Then one day we were waiting for the bus to pick her up for school and the girls and I were talking about different costumes, and all of a sudden she popped up and said “why couldn’t I be like a dead zombie head in a tank?” I was like “WOW!” and then my thought went straight to The Walking Dead and the zombie heads in the fish tanks. And so the making of a great costume began.

So I mapped out the design in my head and rounded up some boxes at work that would be large enough to fit a kiddo in and that would stack up to make a tank on a stand. Needless to say, my coworkers thought I was a little strange! When I got the boxes home, I took a nice sharp serrated kitchen knife and cut the three sides and top out of the box that would go on the top for the tank (picture #1). Then I covered all the edges with black duct tape to make it look like a fish tank (picture #2). I then took strips of cardboard and covered them in wood grain contact paper and glued them just inside the edges. Next, I covered the outside of the bottom box with wood grain contact paper as well (picture #3). I then measured my daughter’s head to see how big the hole would have to be and cut it out with a knife. Next I painted the bottom of the tank with a muddy green looking paint and added some fish tank rocks. I also hole punched four holes and added some green LED lights to light her face up like she was in some gross looking water (picture #4). Then I added a store bought fish tank background and some creepy looking tank weeds (picture #5). Before going on, I glued the two boxes together and to make it more trick or treat friendly, I cut arm slits on both sides so she could carry her candy bucket (picture #6). I then took the black duct tape and outlined the front of the box to make it look like doors. I made door handles with some cardboard and chrome tape and made the chain with chrome tape as well. For the finishing touches (picture#7), I made a wood slate with some of the contact paper and a cardboard piece, and then I used some black paint to make it look old. I also ended up making a lid for the tank by cutting a piece of cardboard that fit and covering it with black duct tape on the top side; and painted the underside with sliver paint. This was to make the green LED lights reflect of and back down on her head for that green water look. I then painted the words on it inspired by The Walking Dead scene at the hospital “Don’t open dead inside”, but this is a fish tank and you don’t tap on the glass because you might scare the fish, but with this costume, “don’t tap cause there is a dead zombie head inside”.

So when it was time to get all dressed up to do some trick or treating, I made up her face with some zombie makeup (picture #8). I also made the clothes she was wearing under the tank look all zombie so when she took the box off to sit down, she was still in costume. But as we walked around, hearing people read her costume and then react to it was just great. Everyone would say “don’t tap, dead inside” and just start laughing. A lot of people were like “someone is a Walking Dead fan.” Then, as we walked around, my daughter was keeping track of how many little girls were dressed like Frozen characters and she said “mommy I’m really glad I choose not to be like them” That’s my girl! 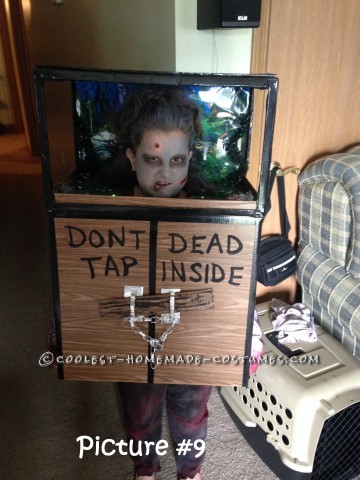 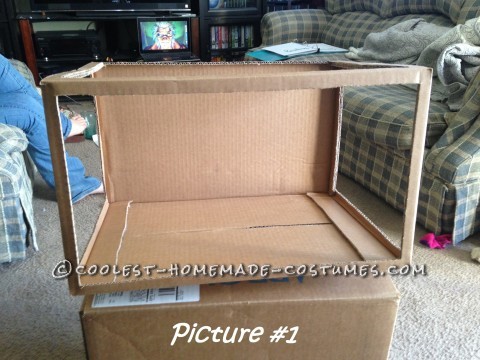 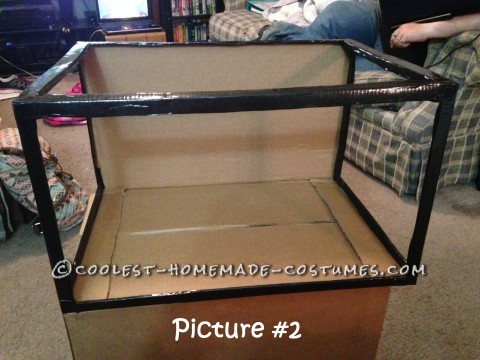 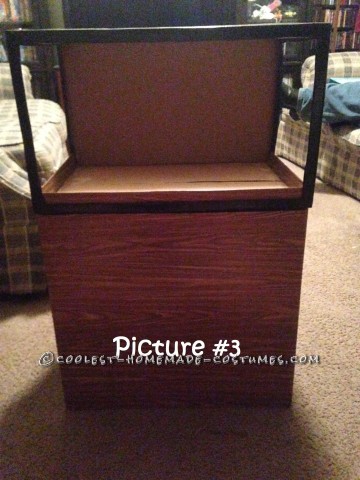 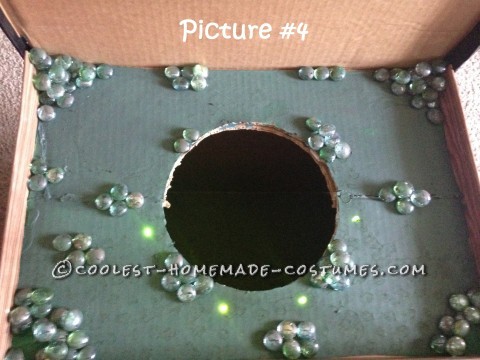 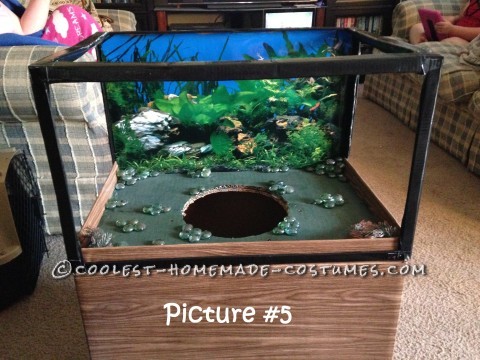 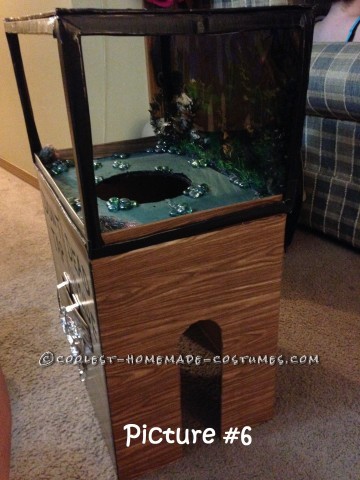 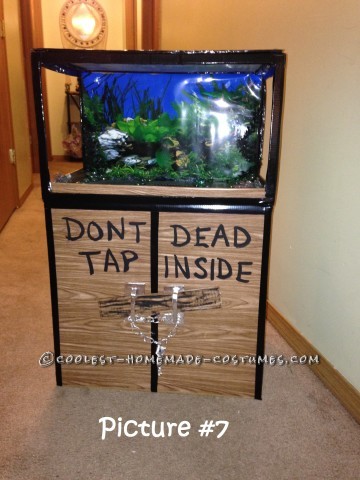 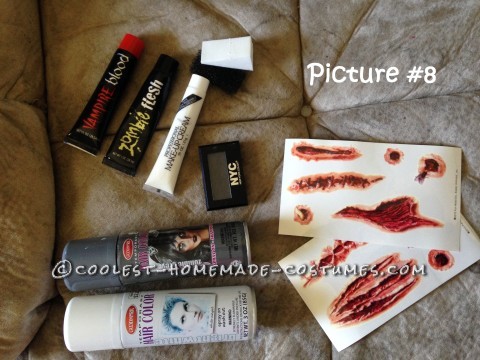