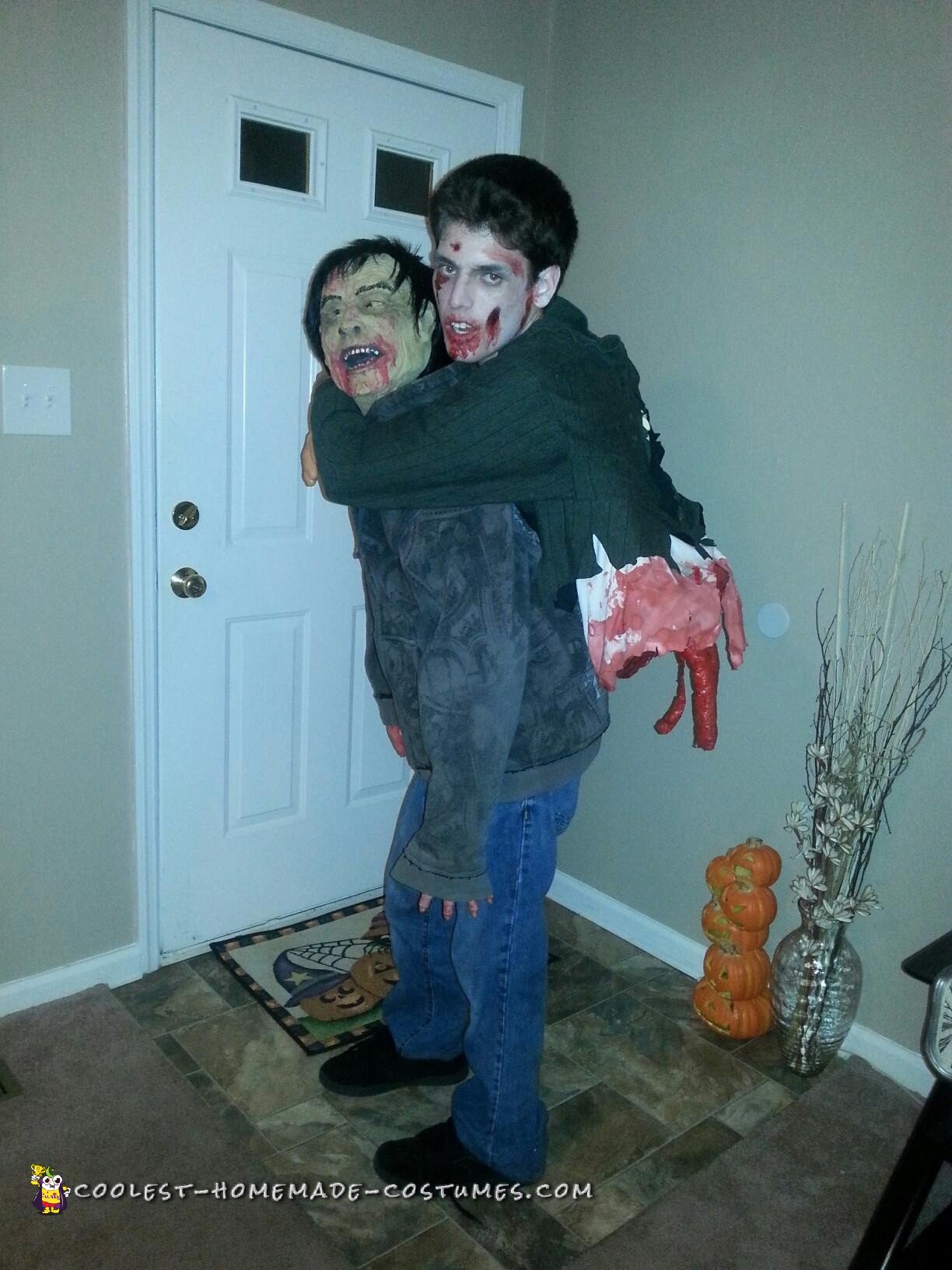 This zombie costume was originally created for a zombie walk in the town I live in, Fayetteville, NC. The idea came a year ago when I was trying to think of clever zombie ideas. I wanted to create a zombie like no other that has been seen.

Since I am a magician I started thinking of diferent optical illusions I could use in order to create a zombie, and the idea of half a torso being carried by another caracter came from the movie Hellboy in which the main character at some point of the movie has to carry this torso of a deadman on his back, this deadman talks and is also a character. So that is where the idea comes from.

1) A fake head which I bought at a party city years ago.

2) A fake torso which is entirely made of tape and newspaper, along with two fake hands I bought at a Halloween store.

3) A fake arm that wraps around the fake torso. The reason there are three fake arms is because I use my right hand to control the zombies head, you see the fake head works as a puppet. I glued into the head a pair of eyes from an old toy puppet that allows me to move the eyes left and right with my finger and with my thumb I control the mouth.

I made the torso using a technique calle tape sculpting in which you tape around someones body an then you cut it, esentially making a cast of them. The only things that are store bought are the three fake hands, one of them is from the dollar tree, and the head is one of those severed heads in halloween stores.

For the head all I did was take out all the stuffing and added the puppet eyes. The clothes were old clothes I dont wear anymore. There is also a wire frame I added to the torso to make it stand upright. The frame goes into my pants pockets to make it a little less heavy.

The reactions were incredible in fact I decided to do a halloween themed 5 kilometer race in which you could come dressed up, somehow I got the idea that bringing this costume was good idea. Boy was I in for a surprise. It turns out this costume is awesome to look at, great for scaring kids and their parents, but is a terrible costume for running.

Somehow I managed to stay in first for the begining of the race but people in shorts and T-shirts started passing me. I came in, in 5th place, which I am very proud of because I had all this extra weight, I could only use one of my arms, was wearing jeans, and was wearing two long sleeves and a short sleeve. We could say I came in 6th the zombie did in fact beat me by a head.

At the zombie walk it was nothing but curious on lookers and lots of people asking to have a picture to share with their friends and family, which to me is absolutely awesome because thats why I do it. Every year I work hard on my costumes for that moment of amazement and wonder which lights up the eyes of children as much as that of their parents. A lot of people were just confused when they saw me. I got a lot of compliments, and got people asking me if there was two people. those who tried to touch the zombies head would jump when the zombie reacted by trying to bite them. like I said the eyes and the mouth move. It reacted to sounds movement and just all of its environment. of course I controlled it thru puppetry with my right hand.

I just hope the costume makes you smile.