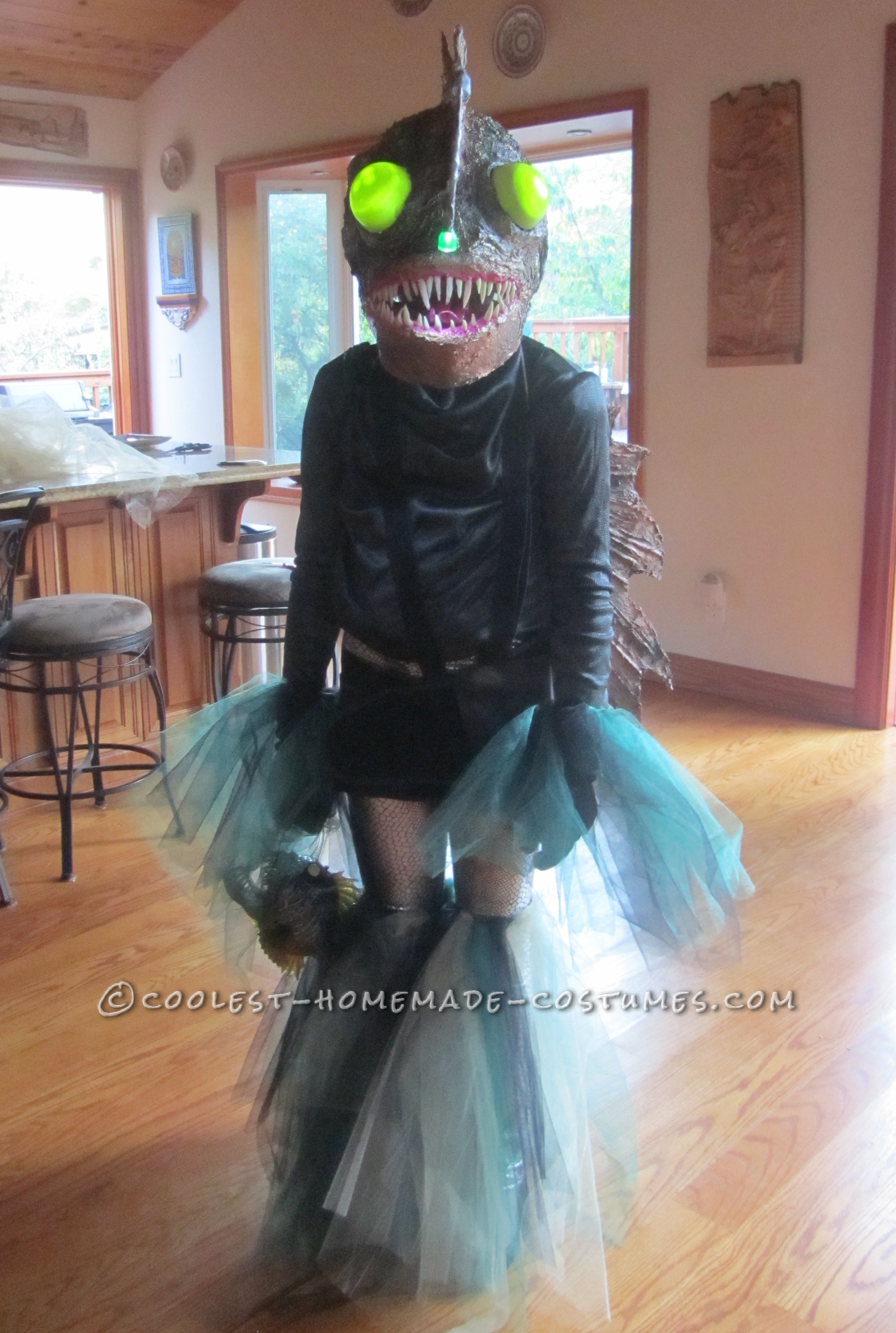 My 11-year-old daughter has had a fascination with the Angler Fish ever since she saw it on the BBC Blue Planet series.

Last year she did a school research report on the Angler Fish which sparked the idea that she would BECOME her favorite creature for Halloween.   It’s CREEPY!  It’s SCARY!   It’s WEIRD!    AND it comes with its own flashlight!   It doesn’t get any better than this!

But…you don’t find this costume on the rack at the store.   Now, just how was I going to make her into this fabulous fish?  This was my greatest Halloween DIY challenge to date.

Happily it turned out much better than I expected.  My daughter was proud to wear her costume and was by far the biggest attraction in the neighborhood!

HOW TO MAKE IT

The Angler Fish Head/Mask was made using a sports helmet with partial face mask on which I constructed an armature of the fish head with cardboard, newspaper and lots of masking tape.   Wooden skewers were used to create the bony spines of the dorsal fin.

After constructing the armature, a long wire was strung through one of the ventilation holes in the top of the helmet.  This wire would later become the lure of the Angler by deconstructing a clip-on LED book light and duct taping it to the end of the wire.  The wire would also be covered with silver duct tape.

The armature was then covered with a 1/4″ thick layer of paper Mache clay (toilet paper, white glue, joint compound and white flour). Fish scale details were carved into the clay with toothpicks.

Glow in the dark teeth and red tongue were created with polymer clay and hardened in the oven.  Teeth were attached to the mask by sticking them down globs of paper Mache clay which would become the gums of the fish.  When the clay dried the teeth were secured to the mask.  The tongue was adhered inside the mouth in the same manner using a glob of paper Mache clay under the tongue.

The piece was allowed to dry for 24- hours.

The head was then painted with metallic and glitter spray paints.  Fine details were painted with basic acrylic craft paint.  Once dry, the paint was sealed with a clear gloss spray top coat.

The eyes were created by cutting a 3″clear acrylic craft Christmas ornament in half.  Each was spray painted lime green to create a creepy green glow when placed over 3″ round LED lights that were adhered in the eye sockets.

Fish Body – My daughter wore a black and shiny silver long sleeved blouse from the thrift store which had the appearance of fish skin, a black turtleneck, and a pair of silver and black metallic leggings with a snake/fish scales design.

Pectoral Fins and Tail – As she was the entire fish, her arms became the pectoral fins and her legs the tail of the fish.  Strips of sparkly dark green, black, and gold tulle where tacked with needle and thread around bands of 2″ black elastic (2 for the arms and 2 for the legs).  Black gloves were worn to hide her hands.

Back Dorsal fin – Was again made with paper Mache clay over wooden skewers and cardboard that was spray painted when dry.  Elastic bands (similar to butterfly wings) were used to make the fin wearable.

This Halloween, my daughter experienced her 2:15 minutes of fame as the ANGLER FISH.  As she haunted her neighborhood she posed with neighbor after neighbor, who simply had to have their pictures taken with the bizarre and amazing angler fish!

When she reached the neighborhood gathering place on Halloween, affectionately known as the SPOOKY HOUSE, the most serious of Halloween lovers greeted her with admiration and astonishment.  Posing with neighbors gave way to full on paparazzi as pictures of her costume were feverishly snapped from every angle by the home owner.  She later offered to buy her Angler Fish head to add to her extensive collection of spooky props and horrifying animatronics.  My 8-year-old, Lily, quickly yelled out, “It’s not for sale!”  Lily wants to wear it the first Halloween that her head is big enough.

The best praise of all was the huge grin on my daughter’s face as she surveyed her candy haul spread out on the floor in front of her.  “Thanks, Mom!  This was the best Halloween EVER!  Thanks for the awesome costume!” 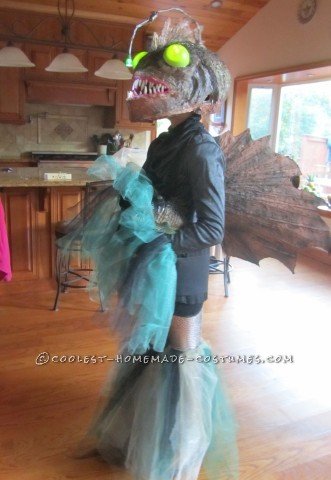 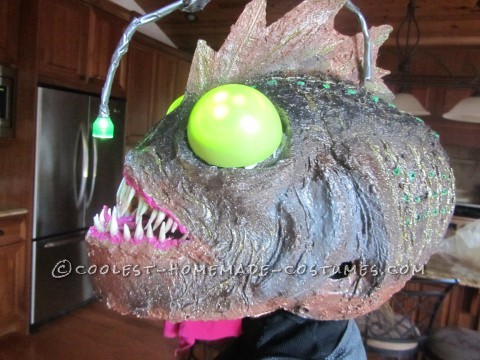 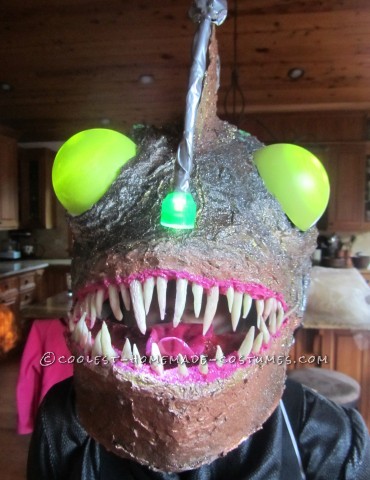