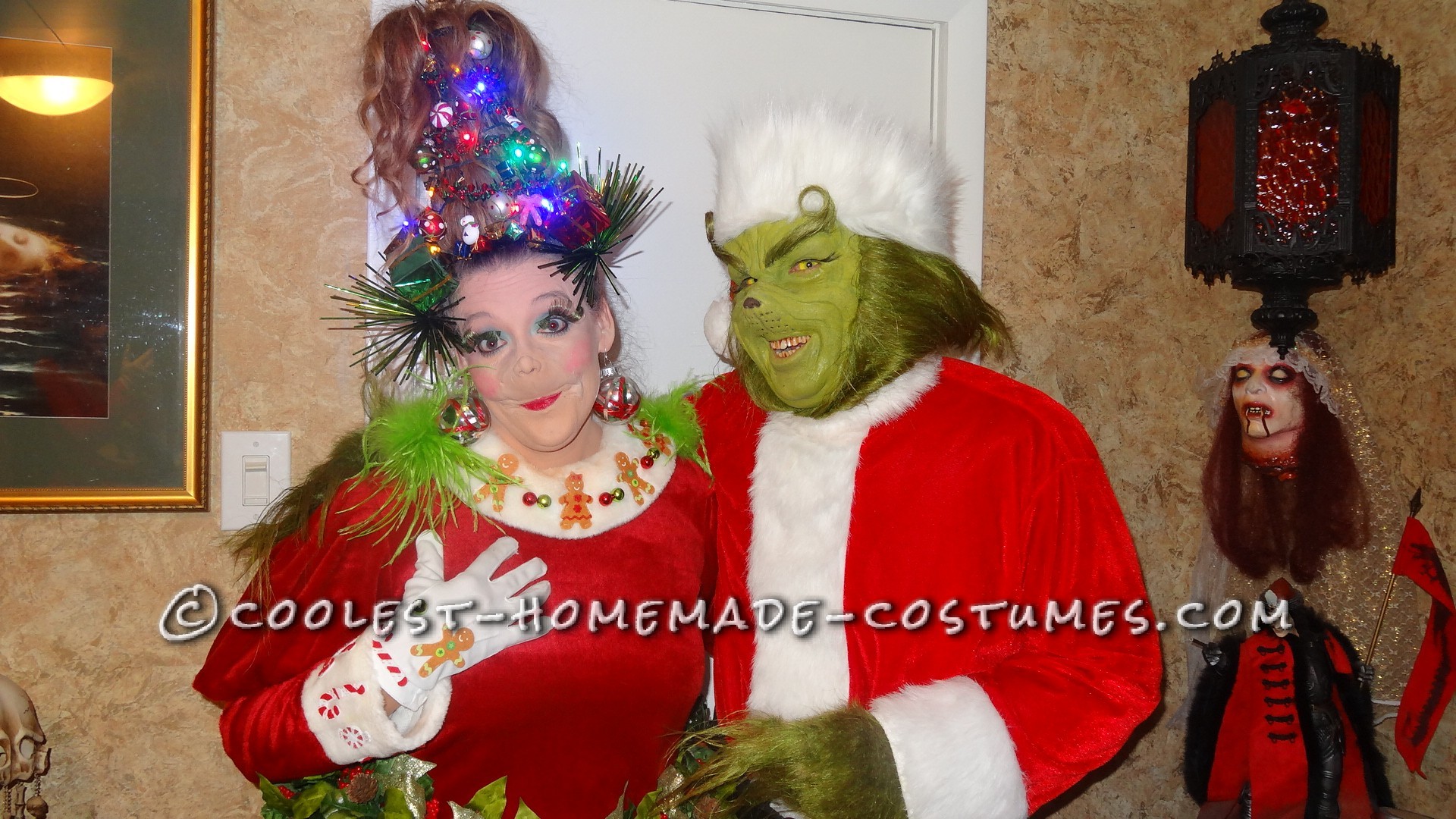 In our household Halloween is the time that sparks our imagination most. It’s been a long time coming , but this year we were able to pull it off!What you may ask? The Grinch and a version of Martha May Whovier. My husband has watched “The Grinch Who Stole Christmas” by Ron Howard, several obnoxious times. He has long practiced the great Jim Carrey’s mannerisims and voice, as the Grinch. The process of creating the costumes, were very time consuming. It took months. We purchased the multi green yak fur online. Not cheap!My magic handed husband, then hand sewed the head cowl, a pair of pants, elbow length fingered gloves , as well as the santa hat. It took him a few days to ventilate both eyebrows. A process in which you thread each individual hair, through tiny little squares on netting. We purchased a cheap santa jacket and belt, from some very dear friends , who own a costume shop. Getting down to the last step, the shoes. He took rubber elf shoes, carefully adhered red velvet material, white fur at the ankles and a couple of bells, to the tips of his toes. He also customized his eyelashes. The mesmerising jaundice eyes, were purchased and made to order. It really helps bring the character together. Last but not least are the make-up steps. To what can be a very lengthy process. To start he applied a foam latex prosthetic, by adhering it to his face, with pros-aid. He then powdered, latexed, powdered, applied grease base make-up, added highlights, powdered once more to set the make-up and he was ready to go. The mean one himself had been resurrected.

As far  Martha May Whovier, we purchased a cheap Christmas gown. I hand sewed all the embellishments, you see on the white trim, as well as the gloves. The belt was made of garland I had stored away. I decided to fill it with embellishments. I wore Christmas socks and shoes that cost a mere six dollars. The accessories included earrings that I created, by pushing multi metallic ribbon into clear plastic ornaments. The Christmas tree pocketbook was croched. I found it at a thrift store for fifty cents. I purchased a large hollow tree, stapled the material to it and filled it with our needs for the night. The hair was a struggle in itself. My hair is naturally curly, so first I had to straighten it. Or should I say burn it! I then put a styrofoam cone on top of my head. Securing it with bobby pins, I pulled my hair up over it, tieing it on top with an elastic. Using a little hairspray, I then curled the pieces of hair dangling on top. Then it was time to apply the working lights, garland, many ornaments and the final touch, the glittery gold star. Can I just say, thank God for bobby pins!Time to finish up with the make-up, by applying a foam latex prosthetic, following the same steps as the Grinch. Finally the finishing touches, included applying long crazy eyelashes for the first time.

It was that time of the night to head over to our annual stomping ground, Salem, Massachusetts. Only after six hours of getting ready. Let me tell you, when your fake nose has to be placed higher than normal and your nose begins to run, or you have to sneeze , it’s not a very comfortable situation. Getting in the car was very tricky. Considering, I grew another foot with this giant tree on my head and he had to drive in long elf shoes. From the time we stepped out of the car in the parking garage, we were bombarded with people. We had planned on going to a local place that was hosting a costume contest. Never happened. It took us two and a half hours to get there, it should have been a five minute walk. By that time it was really packed, so we decided to play amongst the people. I was constantly pulling hair out of his mouth, as the wind picked up throughout the festivities. Now we have a better understanding of what celebrities go through. The reactions from the large multi cultured crowd were spooktacular!People commented on my husbands great work and his Grinchy demeanor. All in all, it was a photofinsh night, to celebrate with so many beautiful people. Eat your heart out Jim Carrey! LOL 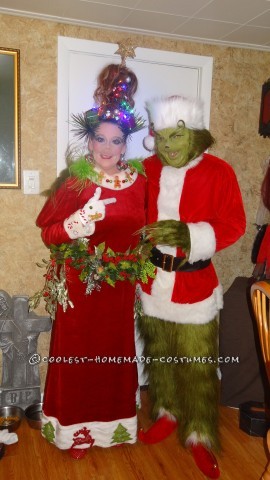 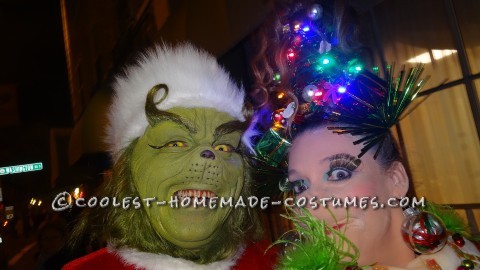 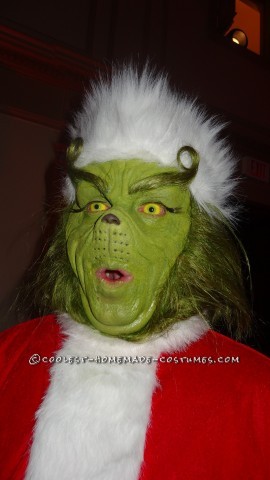 The Grinch Costume with Laytex Mask and Makeup

4 thoughts on “Cool Grinch and Martha May Couple Costume”