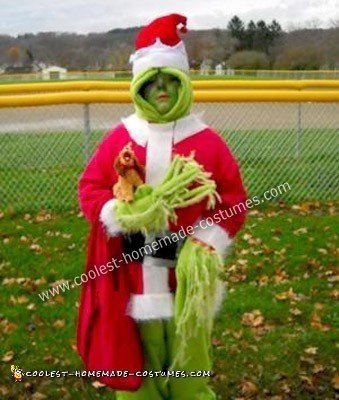 I’ve always made my son’s Halloween costumes and this year was no different. My son is 10 years old, so I’ve had many years of practice. I started thinking about an idea for his costume in May or June and eventually narrowed the choice down to either the Grinch or Shrek.

I started pricing lime green faux fur and, much to my surprise, found it to be as much as $35.00 a yard. I, therefore, started to rethink my idea. I’m a thrift store/Goodwill shopper on a regular basis, not just for Halloween costumes, so started checking their clearance racks. I came across a pillow and blanket set at Walmart, made from a lime green fleece material, for $6.00. I bought two sets just in case.

I bought a pair of scrub pants and a hoodie and began constructing the body of the Grinch/Shrek. I still hadn’t decided on the final character. I measured, cut and hand sewed the fleece material to the pants and the hoodie, for about 3-4 weeks on and off. None of my son’s costumes are complete without my blood on them somewhere!

I started looking at hundreds of pictures of the Grinch and Shrek and finally decided on the Grinch. It was different; it was not particularly a Halloween character but it was different and that’s what we wanted. We knew there wouldn’t be another Grinch walking around during trick or treat.

Our progress slowed down during baseball season, but, as soon as that was over, I continued on his costume. My next task was the Grinch’s long pointy fingers. I bought numerous pairs of stretchy gloves and car wash mitts, but none suited my purpose. However, I eventually found the perfect answer: long-fingered toy cat gloves. I cut off the pom pom balls and bells from the ends, covered them in lime green fur and added furry green yarn. They were awesome.

Next was the Santa jacket. I knew I could probably go online and find a jacket, but I was sure I could make it. So I used a plain red long-sleeved T- shirt and bought white faux fur, which I cut into pieces and fabric-glued around the neck, cuffs, jacket bottom and down the middle.

For the belt, I took an old black T-shirt of my son’s and cut off the bottom of it. I created the belt buckle from duct tape and glued it to the Santa jacket.

We bought the hat as grandma fell in love with it. It played “Have a Holly Jolly Christmas”, had blinking lights and the bell danced around on his head. He wore his grandma’s slippers, to the toes of which we added white fur and bells.

I painted his face to resemble the Grinch. I also used an old red sweatshirt, that no longer fit, to make his Santa trick-or-treat bag. I cut off the sleeves to make the handles, enlarged the neck opening so he could put candy in it, and sewed the bottom up.

Let me present to you the Coolest Homemade Grinch Who Stole Halloween Costume! 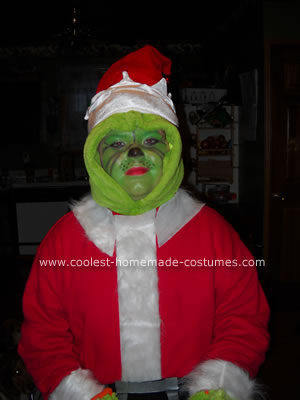