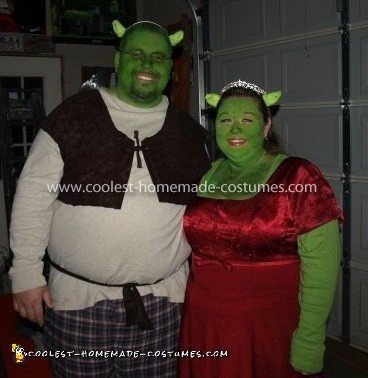 This Homemade Shrek and Fiona Couple Costume was a costume thought up a year in advance. After being married for 2 years I decided that my husband and I needed to dress up for Halloween. Why not right? We work in the same office and it could be a lot of fun! Due to lack of planning and running out of time that year it did not get completed, but I was determined for the next year. So I planned ahead this time.

Off to the Goodwill I went one day to see what I could find to create our costumes with. It must have been my lucky day I was able to locate a pair of flannel pajama pants for Shrek’s pants, a long sleeve Henley style shirt(in a long to allow the extra length below the belly)for Shrek’s shirt, and even an old bridesmaid dress for Fiona. I also picked up a long sleeve green shirt due to the parties we would be attending were outside (it also saved me from having to paint my arms).

So all that was left was Shrek’s vest and belt which I purchased some brown faux velvet fabric drew out a pattern to follow after measuring my husband. I created a pattern for the back of the vest and then folded it and cut it in half for the front two sections. Sewed the shoulder and side seams and snipped a few wholes in the front and laced it up with strip of fabric I cut for the salvage. The belt as well was just 2 strips of fabric I cut from what was purchased and sewed together to make sure it was long enough to tie and to have extra.

Now for all the extras. To make the ears (the most asked question) I purchased remnant of bright green fleece fabric did a lot of looking at pictures. I make a tube like shape and stuffed them with extra fabric and then took the corner piece and hot glued the two corner pieces together to make the shape. Then I hot glued them to a headband I purchased from the dollar store for 3 for $1.00.

Shrek simply wore his as a headband and because he has black hair the black headband blended in really well. For Fiona I styled my hair by pulling it half back but hiding the headband under the hair prior to securing it. So it looked like there were attached to my head. For the tiara I actually used the headpiece I wore for our wedding. One of those things you saved for sentimental value and I was rather pleased I got to repurpose it.

For shoes Shrek wore a pair of work boots and for Fiona I wore a pair of black heels I already had also. I added a pair of fake eyelashes to add drama and some red lipstick and Shrek & Fiona was born.

To obtain the green color was probably the most difficult out of everything. I assumed all the big box stores and local Halloween store would have plenty of green paint/makeup and did not attempt to purchase any until 2 weeks prior to Halloween. Well I was unable to locate any. So I had to get resourceful. The first time we dressed we used the neon green hairspray that you would typically use to color your hair. While the color was good it was rather messy and before the end of the night starting cracking and flaking off. The second weekend we dressed up I made my own grease paint. I followed a recipe I located online. The color wasn’t nearly as bright and the hotter we got the more it melted and the gooier it got. So a word to wise buy green paint/makeup earlier from the store if you choice to be Shrek or Fiona. 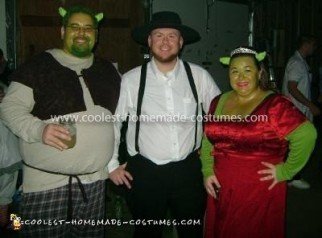 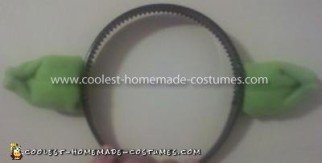 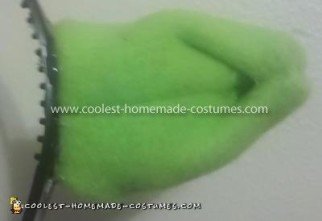