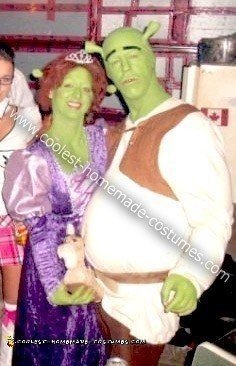 This year we decided to go as Shrek and Fiona.

Shrek wore a pair of stretchy brown pants on which we sprayed plaid stripes with some Halloween orange hairspray paint. He also wore an XXL light-colored shirt, which we bought and then cut out its neckline. The belt was found at a second hand store and we painted it brown. The boots were old work boots, painted brown.

The vest proved to be a little more work; we looked everywhere for the perfect fabric before finding a tan-colored leather jacket in our own closet. We ripped the lining out and cut out the shape of Shrek’s vest, discarding any surplus jacket material. The tie string was also from the leather jacket. We lightly added some brown paint to the vest to give it more of a textured look.

We found a pair of children’s donkey slippers at a second hand store, stuffed one full of cotton and sewed it shut, adding velcro to make it stick to Shrek. The other donkey slipper was the source of Shrek’s eyebrows; we used spirit glue to attach the eyebrows to Shrek’s bald cap which we painted green.

Both Shrek’s and Fiona’s ears were made from autumn decorations in the form of fake Styrofoam gourds. We cut them into the right shape and attached them with crazy glue. Fiona’s ears were attached to her wig, which was originally brown but was sprayed red with Halloween spray. Shrek used his real hair as the pony tail, also sprayed red.

Shrek’s shoes were black but we painted them purple. Fiona’s necklace was made from a Dollar store ring, another cheap necklace and some crazy glue. We found her dress at a thrift store and the crown at the Dollar store. Most importantly, we painted ourselves green.