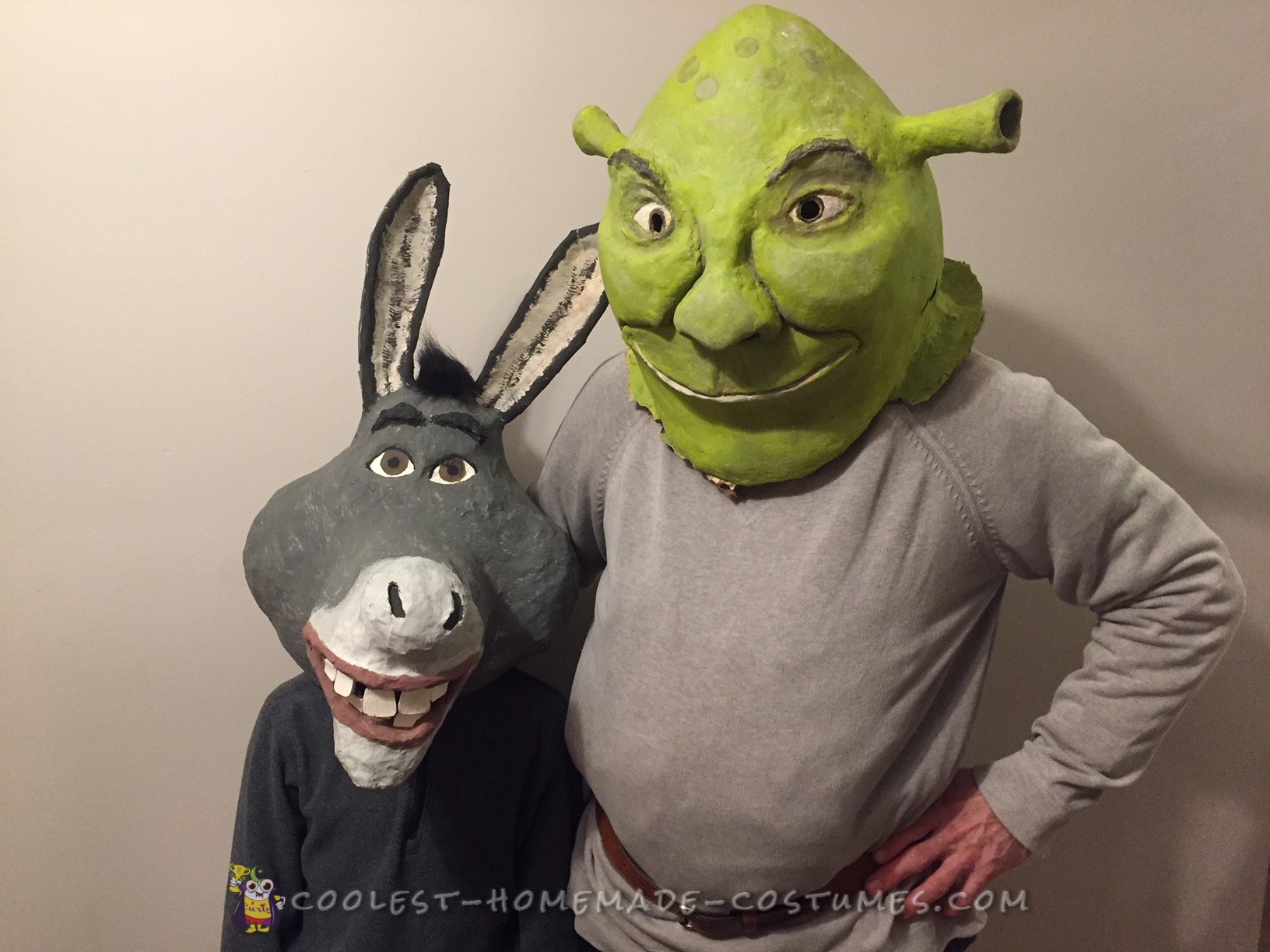 So I got my wife into Halloween costumes when we first started dating. I had just the year before started working at a company where they took Halloween pretty seriously. Every year there was a work sponsored contest with some pretty significant prize money. Our first year dating, I did American Gothic with her for a friend’s party that we went to and then convinced a co-worker to be my partner for the work contest. After that, my wife got sucked into my annual obsession and the following year we did Herman and Lily Munster. I walked on homemade stilts under my costume which made navigating an outdoor party in the dark fairly difficult but Lilly was very helpful in guiding me around. The following year I searched all around to find a black and white stuffed tiger so we could go as Siegfried and Roy and that tiger still belongs to our 15 year old son as a cherished memory of his childhood. He was born at the end of September in 2004 which, where we live in Virginia, is still remembered as the “Year of the Cicadas”. There are sometimes a few cicadas seen in the area but they really are hardly noticeable at all. BUT, every 17 years there is a HUGE brood of them that come crawling out of the ground and start flying around creating the most talked about news of the summer. You hear their songs all night long, end up having them dive bomb your head on a regular basis and some people(like me) have even been known to try eating them. All this to say that for my son’s first ever Halloween at the age of 1 month old he went as a baby cicada with these little plexiglas wings and I was a full grown daddy cicada.

It was the next year that he came to my work dressed as Tweety Bird along with my cat as Sylvester and me dressed in drag as Granny(my wife subbed in for our cat as Sylvester at the costume party we went to). The following year we all did the Wizard of Oz where my wife was the scarecrow, our son was the lion, I was the Tinman (with costume made out of actual galvanized sheet metal) and we even got our nanny involved as Dorothy. The next year our son was 3 but we again had a 1 month old so we went as the Evolution of Man. The one month old was a 1-celled Protozoa, his brother was a monkey, my wife and I were a caveman and cavewoman and our new Au Pair was a modern woman. Then, next year, we did Dora the Explorer. It was pretty practical because we got to re-use the monkey costume of the previous year for “Boots” and since our 1 year old could not walk, he went as “Backpack” that I, as Diego, carried around on my back. Then, naturally, my wife was Dora. The following year we all went as the Jungle Book where we once again got to use the monkey costume.

The next year we did not have the convenience of re-using the monkey costume for a 4th year. As a matter of fact, we went in the opposite direction and ended up spending by far the most time we had ever spent on making costumes. My wife sent me a link to a photo of a kid who had a homemade Shrek paper mache mask. It was great for something a little kid had done all by himself but if we were to do it we would naturally strive for near perfection as we always do in our costumes. I don’t think either of us had ever done much with paper mache other than the normal grade school art class things kids do. So we had to figure out what we were doing and also had not correctly estimated the amount of time it was going to take. And, as usual, we had waited fairly late to get started. Plus with paper mache you can only do so much at a time and then you need to stop and let it dry. So we had several late nights, ended up slightly burning the inside of the mask in the oven trying to get it to dry more quickly and by my estimate we spent at least 50 hours just working on the mask. Her estimate was more like 100 hours but let’s not split hairs.

Shrek was the only one we made a mask for. My wife, as Fiona, applied ears, a prosthetic nose, and lots of green paint along with a wig and a Renaissance style green dress. My oldest son was the dragon and my wife face painted him to perfect his costume. It took her the good part of an hour to do the face paint, which could have been hard to do on a 6 year old but he totally complied by falling asleep in her lap while she did it. I thought our youngest son was the funniest of all the crew as he went as the incredibly diminutive Lord Farquaad. We even managed to get our newest Au Pair into the spirit, having her go as Donkey. When I dressed as Shrek for my work costume contest, I used the stilts that I had made a few years prior for my Herman Munster outfit, but again it was awfully hard to walk on stilts especially considering the difficulty of looking through the nose holes in a paper mache mask. I could also see through the eye holes but those didn’t give me a view of where I was stepping. All in all, I thought it was a great costume year for us and the Shrek mask has been displayed in our house ever since as well as getting used whenever we need a quick costume for something.

Fast forward 9 years to this year when my now 12 year old son proclaimed that he wanted to resurrect the shrek costume but this time he wanted it to be just me and him and HE wanted to go as donkey instead of “little” Lord Farquaad(It’s a little sad for me that my oldest son has passed the age of trick-or-treating, but he now says  that he wants to make his own mask and be Dragon for next year). We are always pretty darn busy as I’m sure all families are but this year we had just been out of our house for 2 months after a tree fell on it, I had a brand new job and my wife was trying to focus on her 2nd business while also preparing to become a teacher. My son and I were under STRICT orders that we could go ahead and do Donkey and Shrek as long as we DIDN’T take all the time and effort to make another paper mache mask this time. So we made an attempt at doing something out of cardboard that wouldn’t take nearly as long. But guess what? Cardboard is no match for paper mache so we ended up doing what? PAPER MACHE!!! ;-)

Well it did take quite a few hours but I don’t think it was quite 50 and we got our old Au Pair, the “original” Donkey to help out one night when she came over for dinner. But mostly it was just my 12 year old and me.

So for the mask we started with one big balloon. After two layers of paper mache (that we let dry for a day in between layers) the balloon inside just randomly popped. Luckily it held its shape and we just re-inflated a new balloon inside it. Then we started adding some facial features by taping on pieces of foam, wadded up newspaper, another balloon for the muzzle, and aluminum foil for the ears. The balloon for the muzzle was key because it was able to be popped and removed towards the end to allow the wearer to see all the way through the mask and out the mouth between the gaps in the teeth.

The taped on pieces gave us a good general shape and then we did some of the finer details using a paper mache pulp. For the regular paper mache strips we just used newspaper, flour and water. It’s pretty cool how you can make a mask and just use flour and water to hold the whole thing together. For the pulp, we tried both shredded up newspaper as well as little bits of broken up egg carton. For the glue for the pulp we used watered down white glue. Then we did a final layer of strips over everything, cut out a hole for the mouth but left little tabs sticking up and down where later we would stick on pieces of foam for all of the teeth.

The painting was nearly done with two days left before Halloween which gave us one last night to finish our work before getting to actually use it on Halloween night. Then things changed. We had been watching the weather forecast and knew that there was a high chance of rain on Halloween night but now they were also talking about possible tornados and thunderstorms. Because of that, one of the local outdoor shopping centers moved up their trick or treating event to the night BEFORE Halloween. I totally hadn’t expected that but I wasn’t sure if we would even be able to go out at all on the actual night of Halloween (because of the storms) and with all that work we had done we certainly wanted to have a chance to show it all off. So we hurriedly painted the eyes, did the mouth and made some temporary teeth. Then we took it out for everyone to see. Now they had moved up the event by a day in order to try to avoid the bad weather but it still happened to rain that night so we took an umbrella and tried to keep the recently painted mask as dry as we could.

Even though the mask wasn’t QUITE finished to how we wanted it to be, it was still the hit of the night. Pretty much everyone we saw said we had the best costumes they had seen all night. We returned home happy and content to have a second mask to go along with Shrek with the thought of Dragon to be added in next year and who knows what my wife might want to do in the future.

I definitely can get pretty manic when Halloween comes around every year but this year we didn’t even carve pumpkins until AFTER Halloween and we didn’t even fix the Donkey mask for Halloween itself but we did fix the eyes and teeth before the costume party we went to on the Saturday night after Halloween. So all in all, yes it did take a lot of time that I could have spent fixing up the house or washing my car or doing any other chores that I never seem to find time to get to but I certainly thought it was “time well wasted”.

‘Til next year, Happy Halloween Y’all!!!