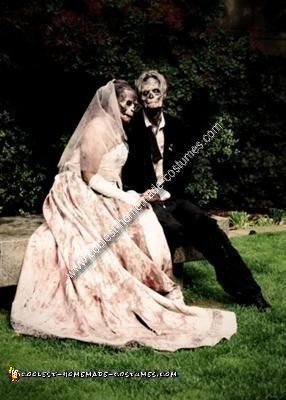 My boyfriend and I love Halloween. We decided to create a homemade married zombie couple costume (a bride and groom zombie costume). We went to our local thrift store and I bought a used $30 wedding dress while he picked out men’s suit pieces for less then $15. When we got home, we began ripping … Read more 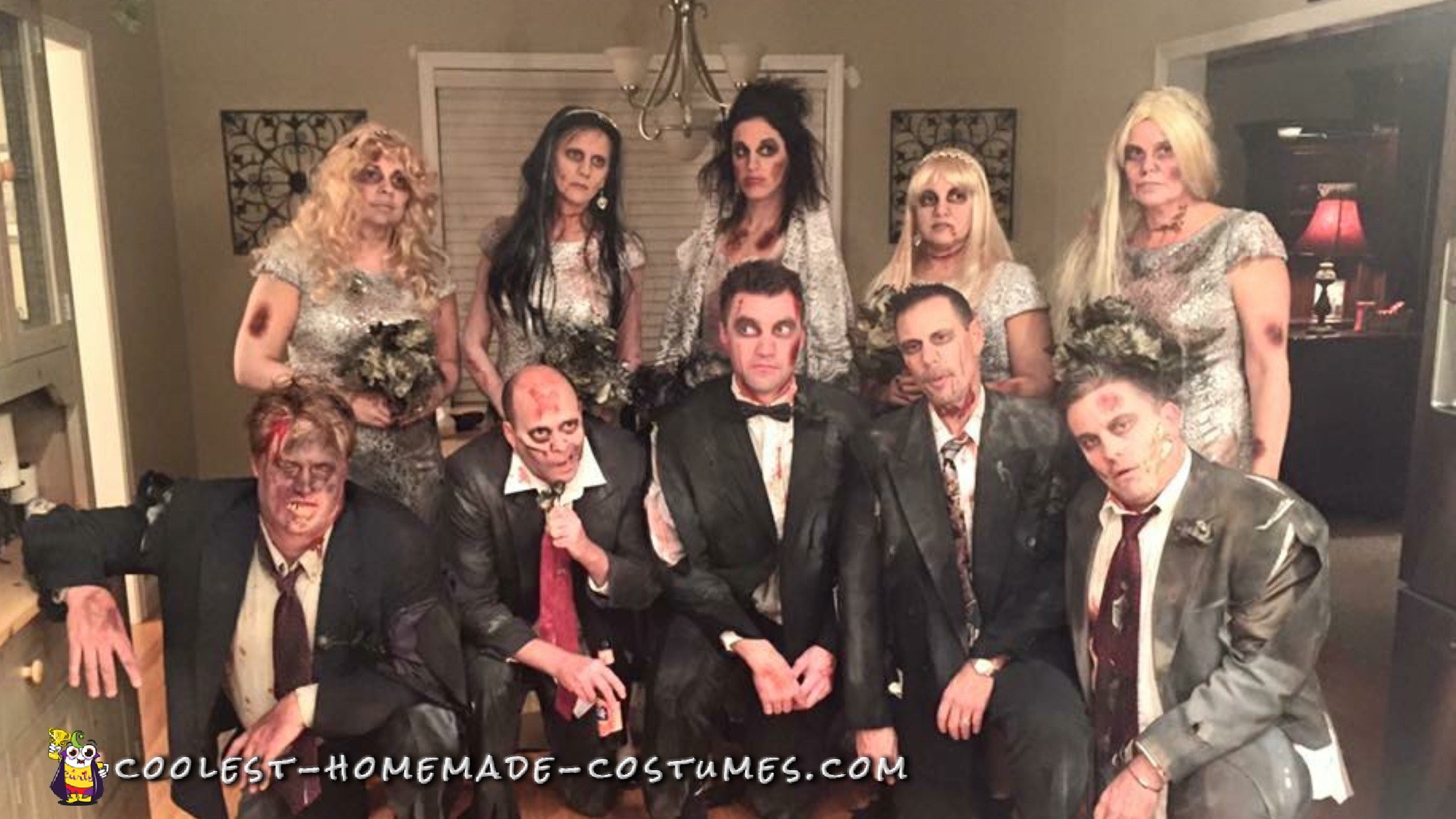 This photo is of my husband and I (bride and groom), and our amazing neighbors. We were attending a Halloween fundraiser costume party. We wanted to do a group costume as we were all sitting together at one table. While racking our brains for a unique group costume, my husband and I were discussing our … Read more 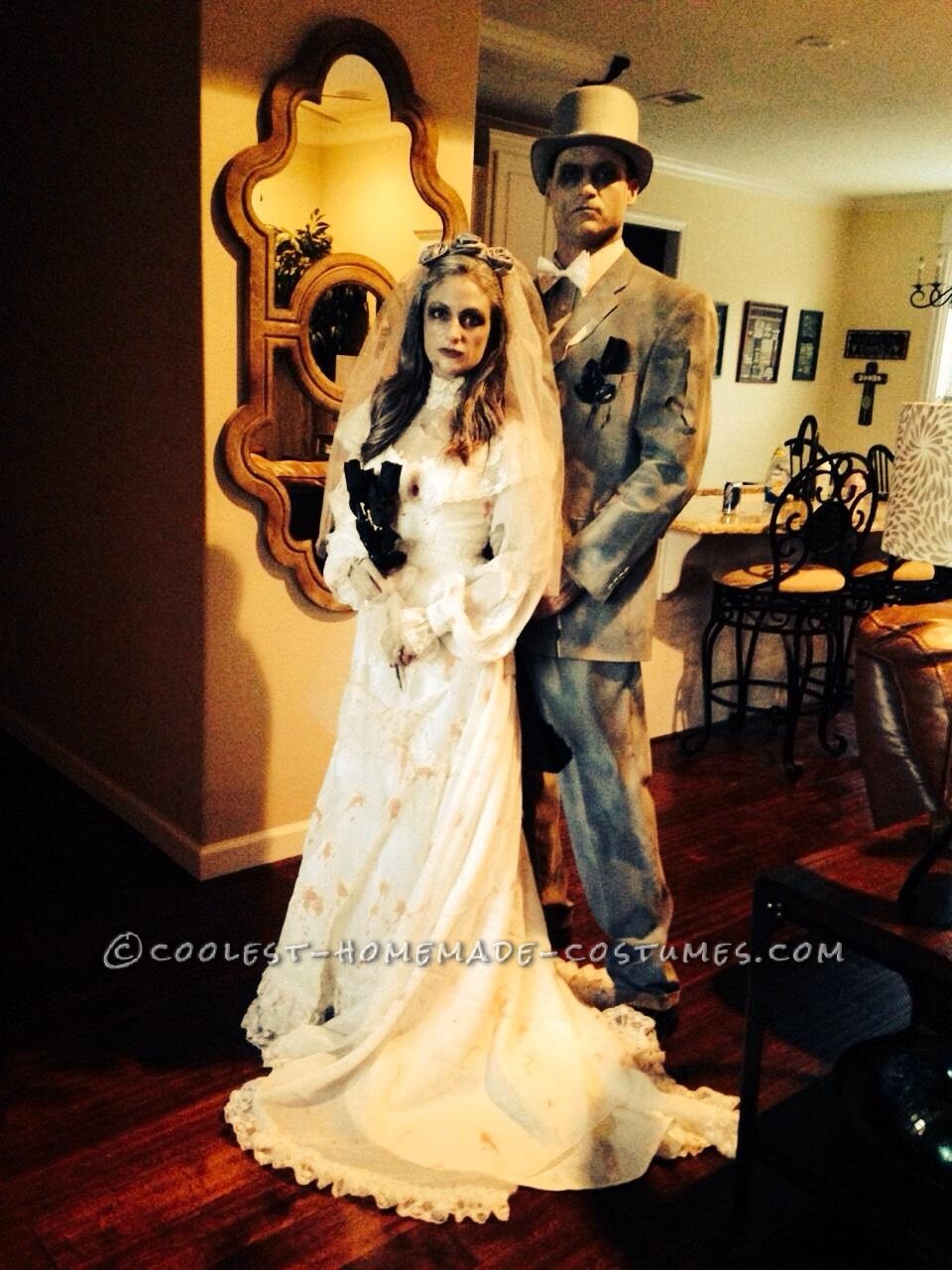 My wife is the most creative woman ever when it comes to saving money, and when it comes to her visibility on making something huge from something small. We’ve been married for 12 years, and we wanted to incorporate our marriage into the costume as well as do our costumes together. She started to think … Read more 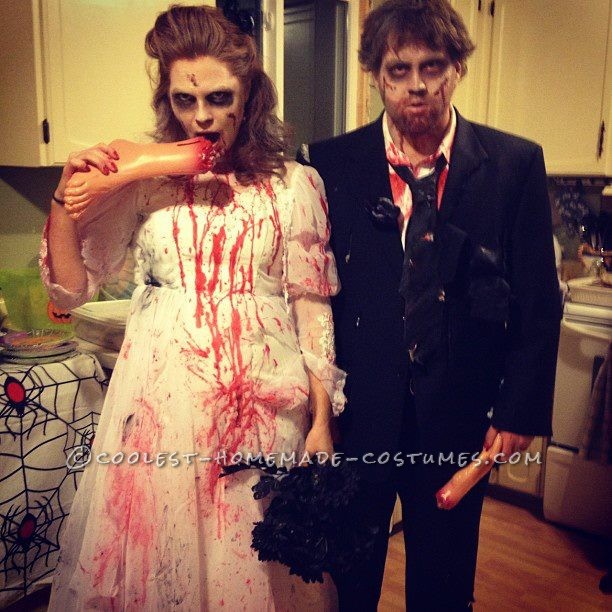 Every year our friends host a Halloween Party and award a prize for the best costume, year after year my wife and I aim to … chew up our competition, tear them apart if you will.  This particular Halloween was no different, the reactions were terror and amazement, the steps to create our costumes were … Read more 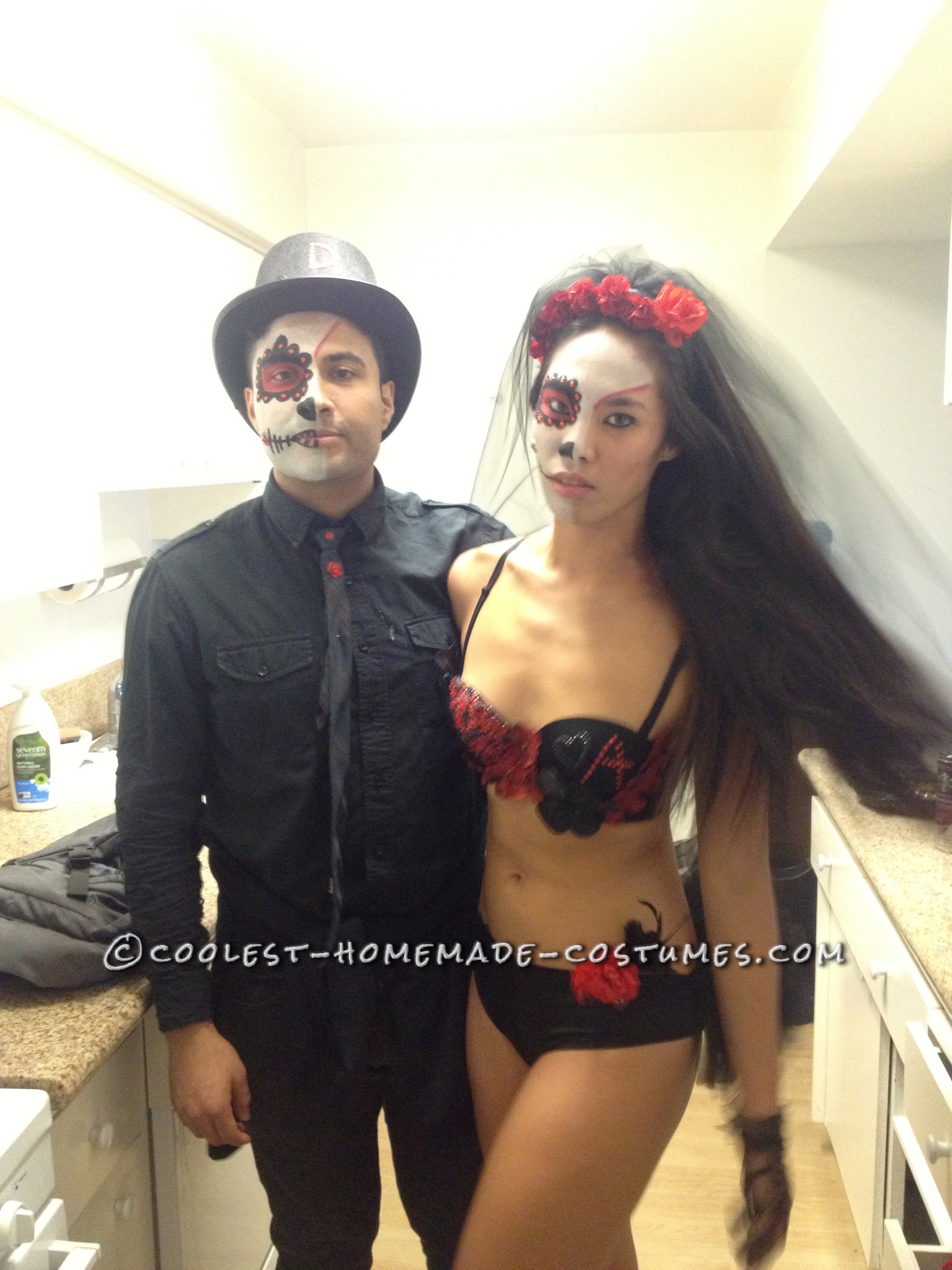 We both put these day of the dead outfits together for the Hard Day of the Dead festival. We decided to be a dead bride and groom, wearing matching colors (red and black). I also put an A initial (for Alain) over my heart and he put a D initial (for Debbie) on his hat. … Read more 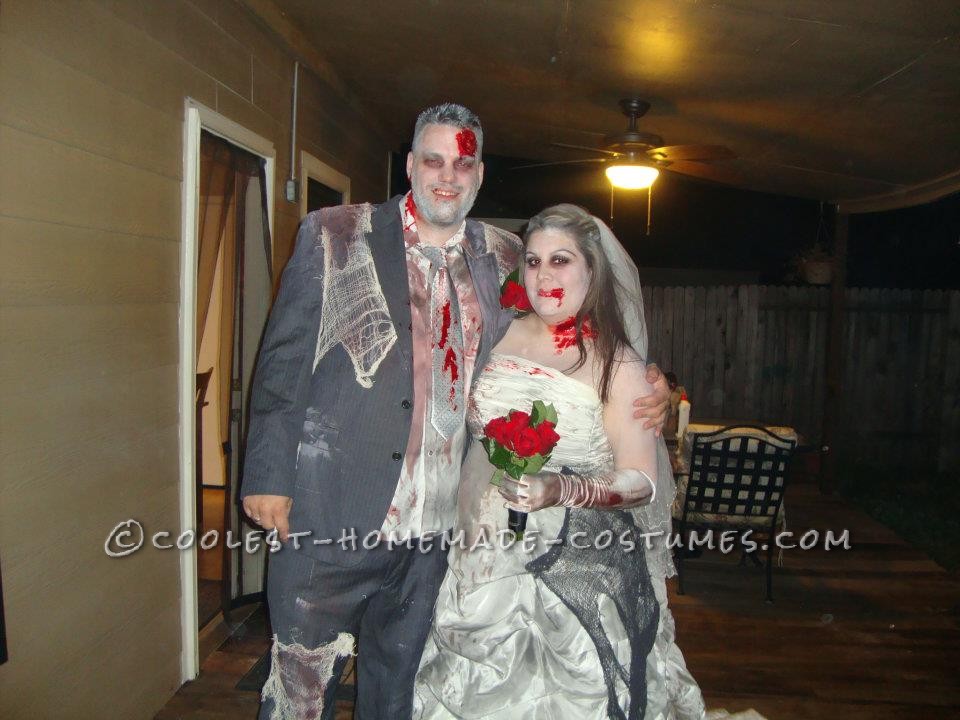 This Zombie Bride and Groom Halloween couple costume probably cost me 25.00 to make. And that was for both!! I asked all my girl friends if any of them had a wedding dress that they no longer wanted- and since one had just gotten divorced, wha la! My boyfriend already had an old suit that he … Read more 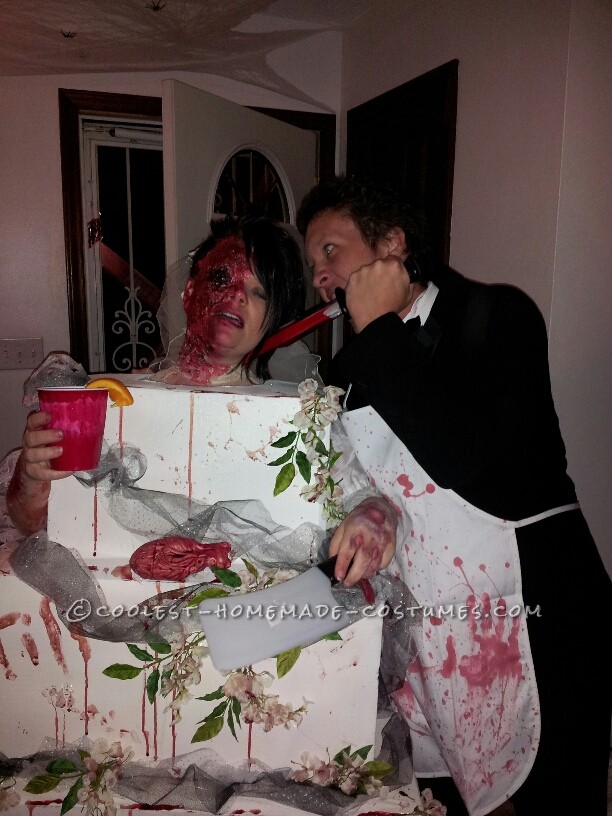 I created this Gory Bride Baked into a Wedding Cake and Blood Thirsty Groom Couple Costume for a Wedding Shower/Halloween party. My first challenge to creating the costume was the cake, finding the right boxes or material to make it out of. I looked into styrofoam, chicken wire and paper mache’ but cardboard boxes won out … Read more 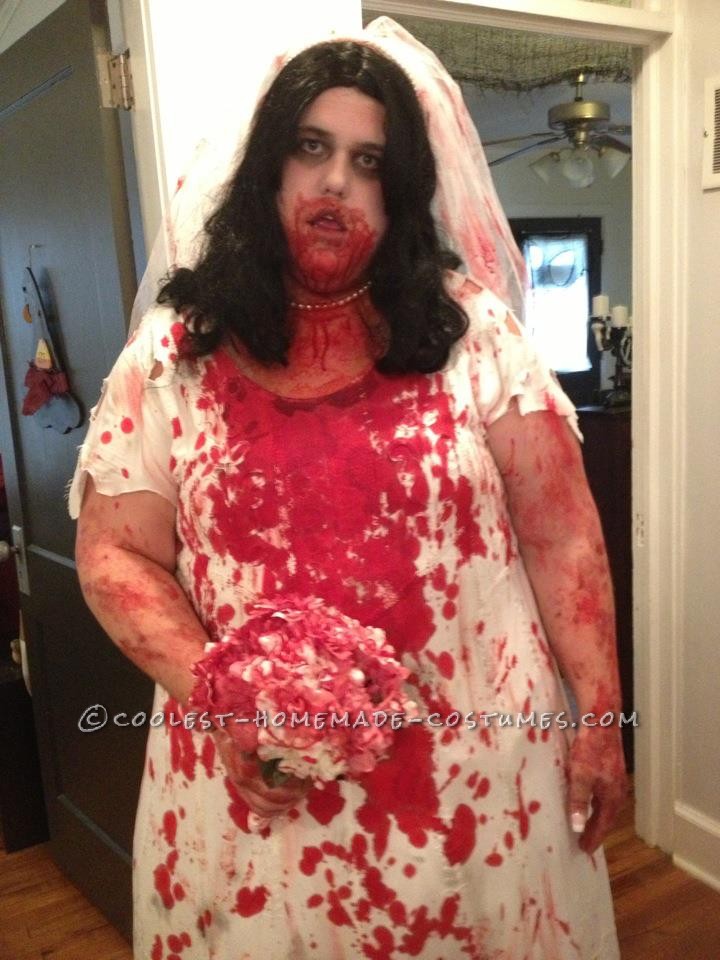 Each year there is a zombie walk done in Columbia, SC in October. This year I wanted to punch things up a bit with a spooky Zombie Bride Halloween costume. So I bought a plain white dress from a thrift store. The dress almost reached the ground and was very bridal. But to add a … Read more 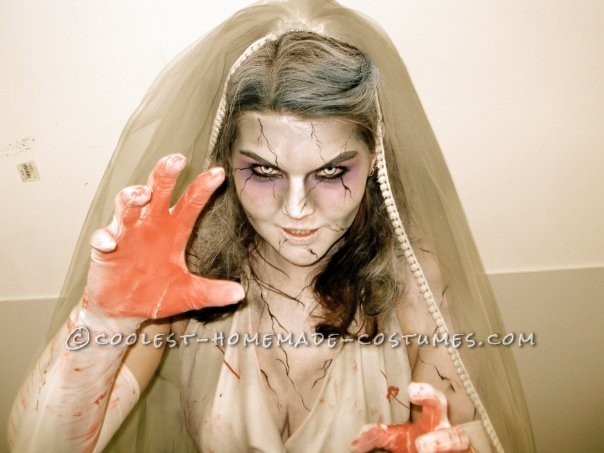 I have been experimenting with different Halloween makeup ideas for a while now, and when it came time to chose a Halloween costume, I was torn between going as a Zombie or the Corpse Bride… enter Zombie Bride costume! The makeup is done by using white cream makeup as the base, and then the rest … Read more 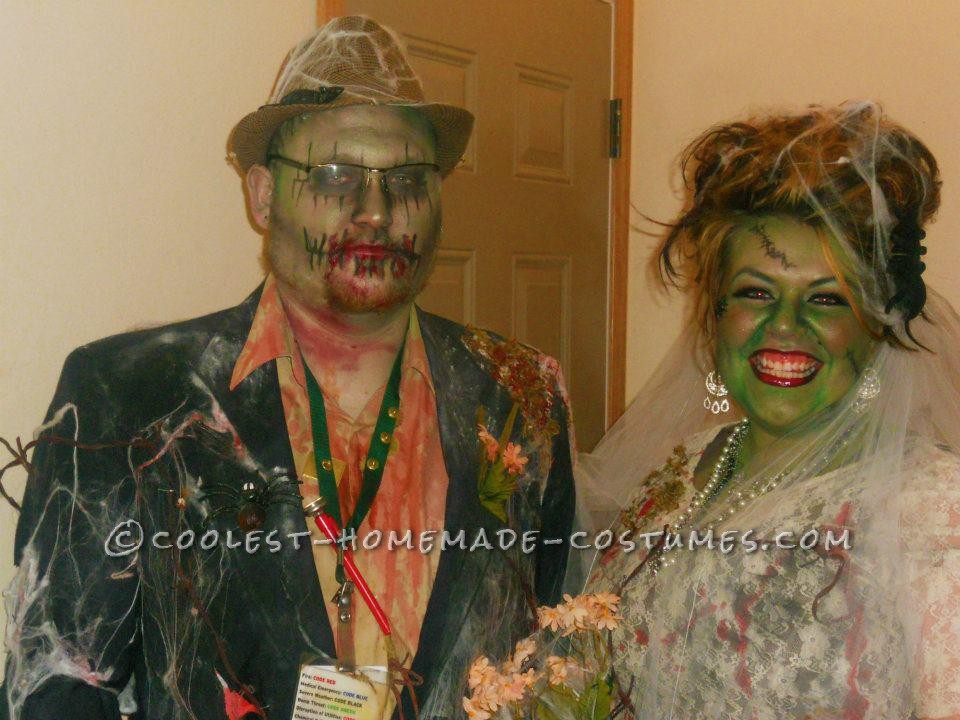 For a costume contest at work, we decided to make a “marry scary costume”. We found an old suit at the thrift store, complete with matching hat, a lace 3/4th sleeve top and the liner cut out from an old prom dress made do for the skirt of the bridal dress. By the way, most … Read more 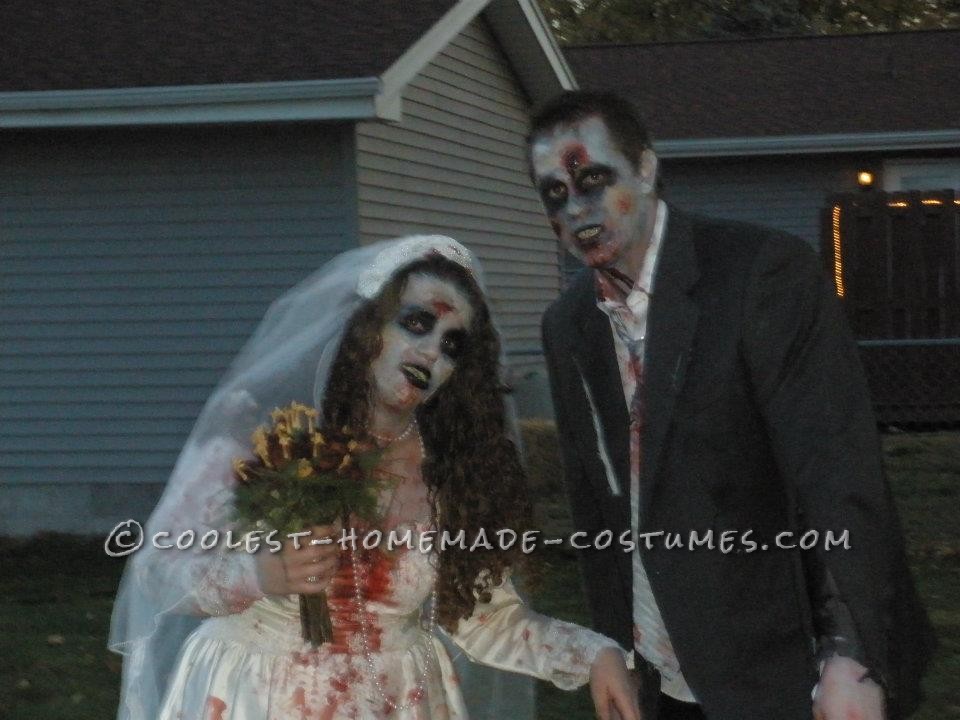 For the groom costume, my husband had an old white shirt that he did not mind getting messed up so we used that, he also had an old tie that he as well did not mind using. For his jacket and pants we went to a Goodwill and bought those which were about $10 all … Read more 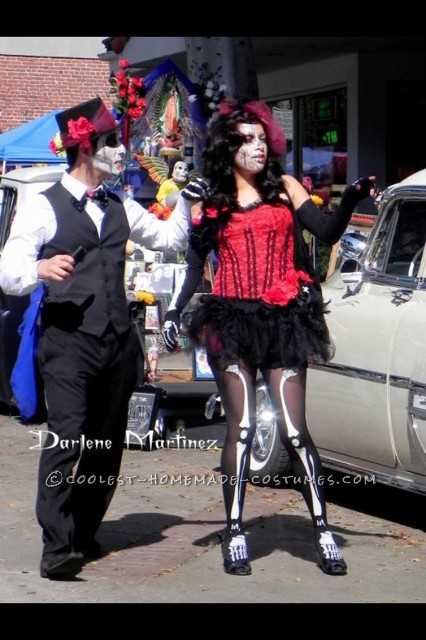