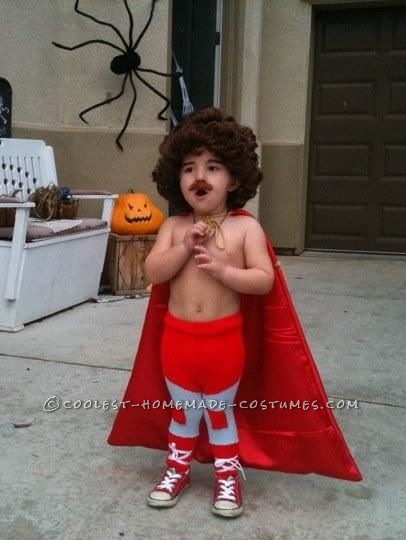 This Nacho Libre costume for a toddler is the first ever costume I made for my 2 year old, he was so obsessed with the Nacho Libre. I tried looking for one online but what do you know, they don’t sell any his size. So I started making it a week before Halloween and to be honest didn’t think it would turn out so funny, I mean good.

The stretchy pants: get some light blue nylons and some red ones, all I did was cut the red ones to make them look like underwear and then pulled them over the blue ones. With the left over red, make the knee guards, or you can use red duck tape, whatever is easiest..and now you got his tights.

The cape: went to Walmarts bargain bin and luckily I found red cape fabric, about 2 yards for a 2 year old. And those tassel things you put on heavy curtains about a yard, and some “jewels” to embellish the top of the cape. All I did was follow a simple cape pattern, sewed the tassel on and hot glued the jewels on, and there’s the cape.

Next for his wrestling shoes: I just bought some used red converse with long laces off eBay for like $2.00 and used again some of the left over red tights to make it look like high shoes by criss crossing the laces over the red part of the tights.

The Wig: this is what made the costume anmama due sure EVERYONE knew who he was. For the wig I got a pair of nylons, cut off the legs, sewed the holes closed and got those fake hair from the local dollar store, you know the ones you put on your bun to make it look “fuller” haha! I bought 4 of these and all I did was cut the elastic band off those and sewed it to the nylon, by hand and viola! I made a wig exactly Nachos color. Finally I just went and got a fake mustache from a vending machine and a fake gold cross chain and Nacho was ready. He actually took first place at our towns Halloween festival. He was so cute and all the adults and some kids new who he was. I’m trying to do a MegaMind costume for him this year… maybe I’ll enter it next year. 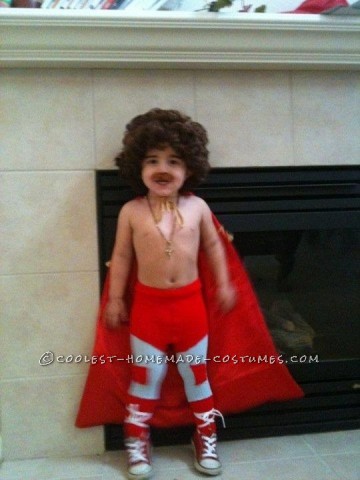 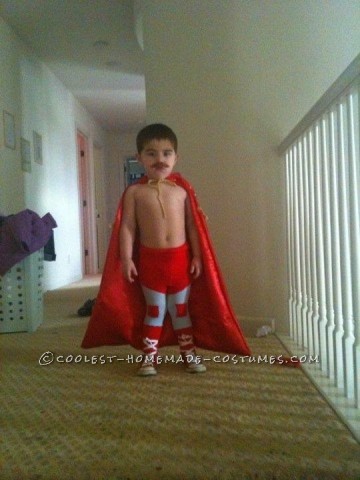