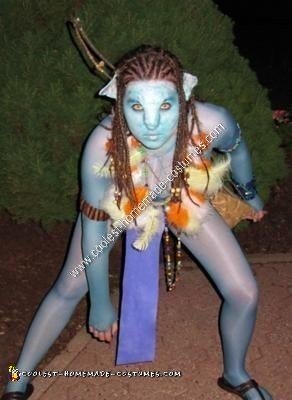 After watching the movie Avatar, I walked out of the theater and said “That’s what I want to be for Halloween next year!”

Preparation for this homemade Avatar Halloween costume began early since I needed to order yellow contact lenses and make sure they arrived in time.

The biggest issue was deciding how to colour my body blue and I was looking into different types of body paint, latex and bodysuits. My goal was to have something that looked natural but not messy like most paints. After asking around to get ideas, my mom suggested using nylons and dying them blue. I looked for a brand that didn’t have a “control top” so that the top portion wouldn’t be thicker and darker blue when coloured. Under the nylons, I wore white tights so that my skin colour wouldn’t show through and the blue colour would show up brighter.

To colour the nylons, I purchased fabric dye and following the directions on the box, put dye into hot water and submerged the nylons. I found that not a lot of dye is required so add colour in small amounts until the right colour is achieved. Then I used a hair dryer to dry them.

To cover my body, I first put on one pair of white tights pulled up high and then another pair worn over my torso with a hole cut to fit my head. Then I put on two layers of the blue nylons on my legs and two pairs of nylons over my upper body. I found that one pair did not give the right colour.

The loin cloth was made from a suede skirt I found at a thrift store. I cut a strip from the front of the skirt to hang down the front of the homemade Avatar Halloween costume. Then two more thin strips about 2 inches wide were cut from the remaining fabric and glued to the back of the larger piece to use as ties. They were tied up at the back and the ends tucked under the tail.

The tail was constructed with another dyed pair of nylons which was dyed to match the other pairs used for the body (5 pairs are needed in total for this costume but the one used for the tail can be an inexpensive pair as it will be cut and sewn). I cut off one leg from the nylons, sewed it diagonally down to a point, and cut off the excess the material. The same thing was done with the other leg to create the long pointed shape of the tail. Then one piece was stuffed with polyester stuffing, spreading it out inside the nylons to create a smooth look.

To create the beaded jewelry, plastic beads were strung onto elastic string. The choker necklace was made using twine which was hot glued around 3 green beads and then just tied at the back of the neck. The large feathered necklace was made by first measuring a long piece of twine big enough to come down to the middle of my chest when tied around the neck. Then I sewed beads about 2 inches apart all around the necklace. Feathers were then glued into the beads using hot glue.

The hair was probably the most time consuming part. I wanted it to look real so I decided to braid my hair instead of using a wig. First I sectioned off a large section at the back of the head which would be for the large braid. Then I braided my hair against the scalp into cornrows all the way around the crown and the rest of the hair was in single braids.

I used kanekalon hair which is a synthetic hair used for braid extensions and braided it into my hair to add length and also to make it easier to finish the ends of the hair. Wooden beads were strung onto the ends of the hair and then the hair was braided for about another inch. Then, using a lighter, the ends of the hair were burnt off which sealed the braid. I made sure to braid well past the length of my own natural hair so that I would be burning only the fake hair and not my own!

Then using one whole back of hair, I braided the large piece of hair which was sectioned off earlier and added the synthetic hair into the braid right from the scalp. I tied off this large braid with elastic bands that had been cut open and I left the ends hanging loosely to resemble the ends of the braid used by Na’vi to connect in the film.

After practicing on my face without any prosthetics, I decided that I really needed to build up a fake nose to get a better effect. Using stick tack, I worked it in my hands until it became pliable and then moulded it over my nose and forehead into a shape that resembled a Na’vi nose. After achieving the desired shaped, I removed it from my nose, covered the nose in white grease makeup found at any Halloween supply store and then covered it in baby powder just like the process used for my face.

This was also done to mould the ears and then the nose and ears were covered in eye shadow to match the face. Ears were sculpted into a point and I made sure to shape them with holes in the ear lobes like Neytiri. To attach the nose aver my own nose, I had originally used nose putty I had found at a Halloween supply store but found that it would slide off and didn’t want that happening on Halloween! So to keep it secure I first covered my nose and forehead just above my nose with two layers of strips of waterproof medical tape used for bandages. Then I used super glue to attach the nose to the tape applied over my nose, being careful not to get glue on my own skin.

Ears were attached by first gluing a hair elastic to the back side of each ear and then bobby pins were pushed through these elastics and pinned to my hair to attach the ears just above my own ears. The braids hung down and covered my own ears.

A very basic arrow was made just by tying a long stick with a piece of twine to curve it into shape. Then took a small brown paper bag and cut a long piece of twine long enough to go over my shoulders and tie to the handles of the bag. This would be a simple version of the case worn over Neytiri’s shoulder to carry arrows but in my case it served as a purse for the evening!

To finish off the outfit I wore brown thong sandals and vampire fangs. A lot of work but I was really happy with the results so it was worth it! 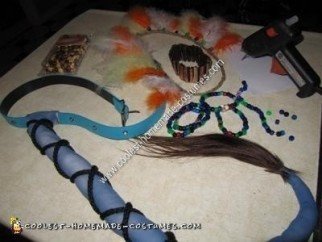