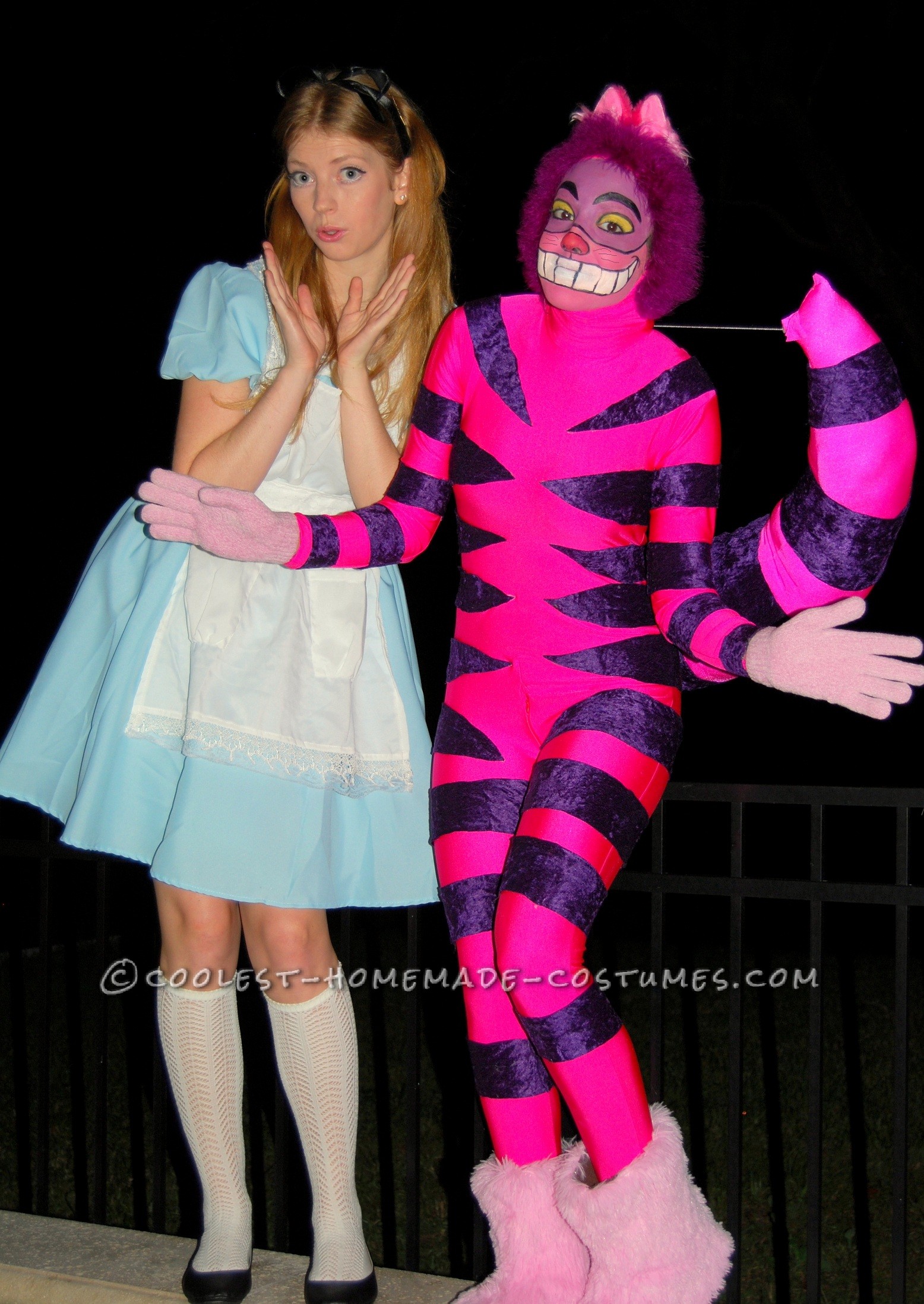 For a whole year I had planned to create my own version of Alice in Wonderland’s Cheshire Cat costume for Halloween 2012. After two days of creation, my vision CAME TO LIFE, and turned out even better than I expected. My goal was to create the human-like version of the Cheshire Cat. Here are the complicated steps I took to create my costume:

First, I drew up a draft of what the costume would look like and made a list of all supplies and accessories needed to create the costume.

I purchased a magenta-colored spandex full-body suit online and included a face aperture. Once the suit came in, I went to a fabric store to find matching magenta-colored spandex material to use for the tail. On the same trip, I purchased a thin, dark plum-colored velvet material that I would use to cut and apply stripes to my costume.  Keeping my tail in mind, I searched for some pillow stuffing, which actually turned out to be snow imitation material, but worked just the same.

Because the spandex material stretches, it would not have been possible to sew on the stripes unless I was wearing the costume. So, a best friend of mine came to help apply my stripes while I was wearing the costume.  We had thought of sewing the material, but realized that hand sewing the stripes to my costume would not only be extremely time consuming, but I would definitely have bled through the costume with all the needle poking.  In lieu of sewing, we chose to hot glue the material to my costume.

I then took the purple velvet material and cut long strips. I then measured the strips around each part of my limbs and torso. I cut rectangular strips for my arms and legs, but instead cut strips with triangular ends to resemble actual cat stripes–hence, the realistic Cheshire CAT. Once the strips were all cut, we began the gluing.

This was by far the toughest part of the costume creation. Although I was unable to be the one gluing, the standing was quite painful and HOT. Standing in a tight spandex costume with hot glue pressing on my body was NOT very fun. I placed each individual stripe in the desired place and pinned it three times to the costume. My friend helped me with this on the back of me. This took several hours, but my friend did a great job gluing my stripes on. When her hand was hurting I took over for a bit, but trying to hot glue fabric to my costume WHILE I was wearing it was a huge challenge.

Once the suit was complete, it was time for the tail. I cut a folded wide piece of the spandex fabric with a very wide bottom and a thinner top, so that the tail would come to a point at the top. I sewed two ends together with a sewing machine and then turned the material inside out. That is when I stuffed the tail with the cotton-like stuffing. Unfortunately, the tail was not as fat as I had envisioned.  I searched around my house for additional material, and came to find package stuffing (styrofoam pieces).  I then stuffed the tail with that and made sure the shapes of the styrofoam were not sticking out through the spandex tail by covering them with the pillow stuffing. The tail was fat just like the Cheshire Cat’s tail.

After the stuffing of the tail was finished, I hot-glued thick purple stripes to the tail as well.  After that was complete, I needed to attach the tail to my suit, so I cut two small holes into the top of the tail, one on each side of the seam, and tied some kite string that I found in my garage through the holes. I then secured the knot with appliance of hot glue. To connect the string to my suit, I cut to small holes behind the neck area of my suit, one hole on each side of the suit’s zipper. The reason for the string connection is to hold up my tail to resemble the Cheshire Cat’s tail and to relieve some weight from the tail coming off.  Once my suit was on, I needed more assistance.  I had my other friend hot glue the spandex fabric flaps at the bottom of my tail onto the back of my suit, where my tail bone is. I then took off my suit to pin four safety pins to my suit so that the tail would be secured to my suit. I then put my suit back on to have the string attached to the back of my neck.  My tail then propped upwards and bounced as I walked.

To finish my costume, I used fluffy pink slippers and pink gloves for the cat’s paws.  I used a Cheshire Cat headband with the ears and slid the headband through two holes I cut into the head of my body suit.  And last but not least, I made up my face with the Cheshire Cat’s large smile.  The makeup of course was my favorite part to work on for my costume.  One last finishing touch was adding some purple feathery boa-like trim around my face.  I hot-glued this around the head of my suit.  This part made me and my friends laugh at how awesome and cat-like it looked.

Please enjoy my custom-made Cheshire Cat costume.  So many people loved it and told me I had the best costume they have ever seen and they appreciated my hard work.  My best friend came around with me as Alice to help create more realization to my look.