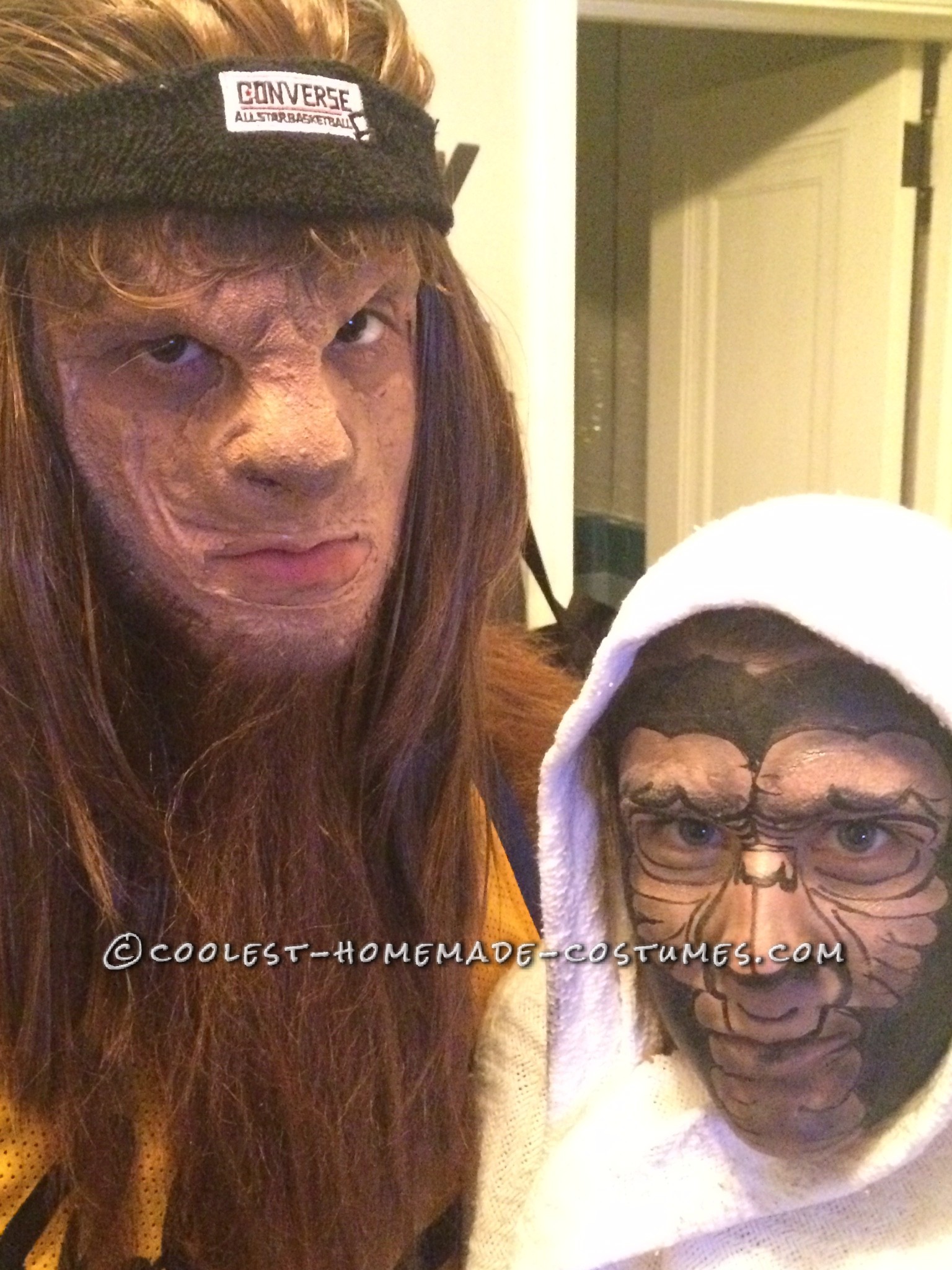 This year, I fulfilled a long time dream of becoming Teen Wolf (Michael J Fox style) for Halloween. It was an intense project but worth it in the end. I will detail how I made each part but as an overview, everything you see was custom made or altered. This is with the exception of the Jersey which I did have custom made and the Adidas Socks that I just purchased. Enjoy! 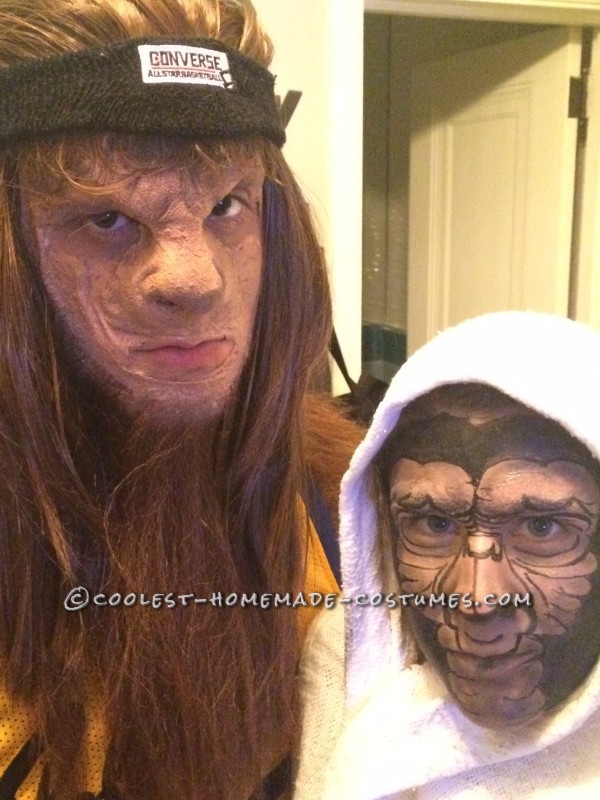 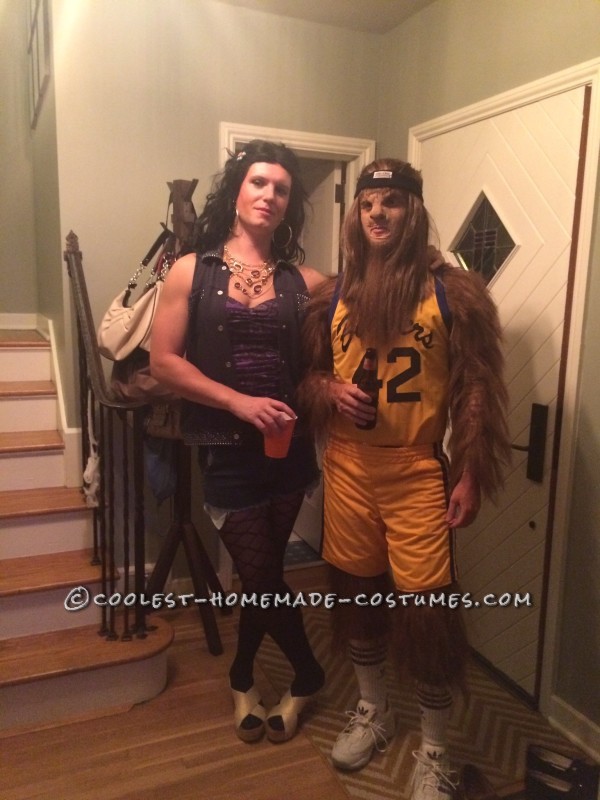 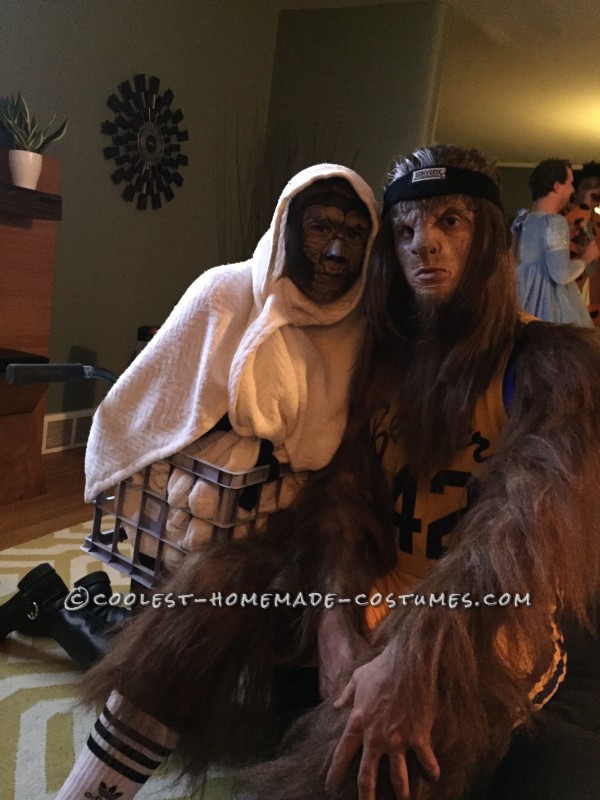 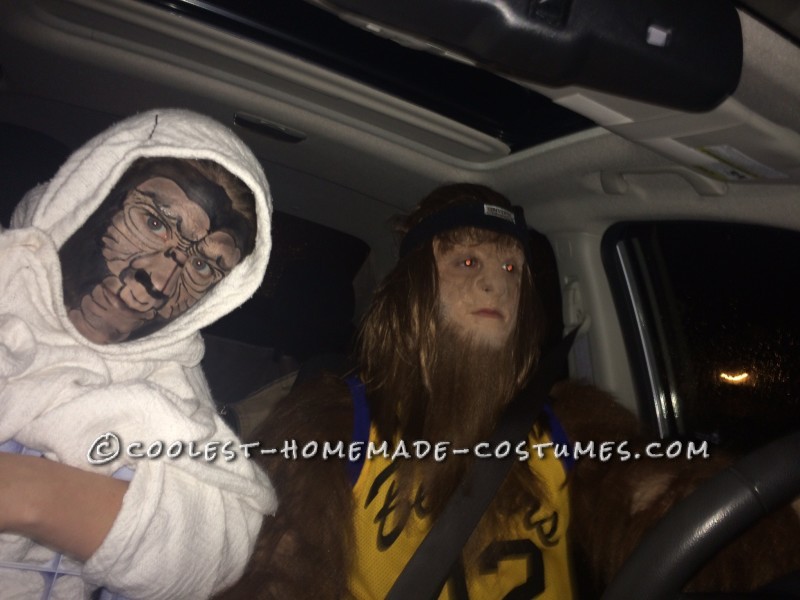 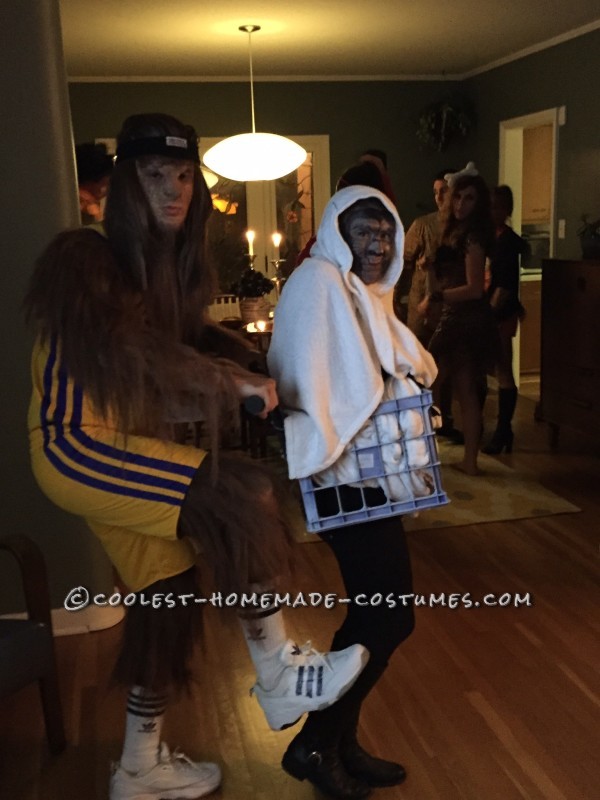 First, I did some research on the easiest way to do this through YouTube.

The products needed to make the cast are Plaster of Paris and Plaster of Paris sheets. Both of these were purchased at Micheal’s. You will also need Vaseline or something similar to coat yourself with, so the plaster doesn’t stick.

I coated my head, face, neck and shoulders with Vaseline first. I had someone apply the plaster sheets to my head starting from the top down. An easy way to do it is leave a line uncovered that goes from the back of your ear line over your head and down the other ear line. This allows you to remove it in two pieces and cover the lines easily to create a sealed cast.

I don’t have pictures of the next part but after you have sealed the line and the cast is in one piece, you need to reinforce the cast so that it can take the weight of all the plaster you will be filling it with. To do this, I used some of the plaster of Paris mixed thin with water and a roll of burlap. Cutting strips of the burlap and dipping them into the plaster, I covered the cast with a thick layer of the plaster-coated Burlap and allowed it to dry overnight.

Once completely dry and hardened, you can prepare the cast by spraying the inside with oil. I used baby oil in a spray bottle. This will make sure the mold doesn’t bond with the cast. Then I mixed up 1.5 buckets of Plaster of Paris and poured it into the cast. There are tons of YouTube videos on how to do this. After I poured the mold, you need to tap on the cast to get any air bubbles out. You can get crazy with how much you want to worry about bubbles but for the detail I needed, I wasn’t worried.

After the pour has set up for a day or two, you need to remove the cast. Do this Gently! I started on the line where I connected the two halves. Using a razor blade, carefully cut through the cast where the line was. Once cut through enough, start to gently pull back the cast away from the mold. This takes some time but be patient, as long as you did all the previous steps, it will come off.

Lastly, also don’t have picture of this, sorry, :( I took the finished mold and sanded it smooth. Then I sprayed a priming coat over the whole cast using BULLS EYE 1-2-3® SPRAY. To finish the head mold, I then sprayed it with black chalkboard spray paint. This stuff will make it so latex can be removed easily. For some reason it doesn’t stick to this stuff. 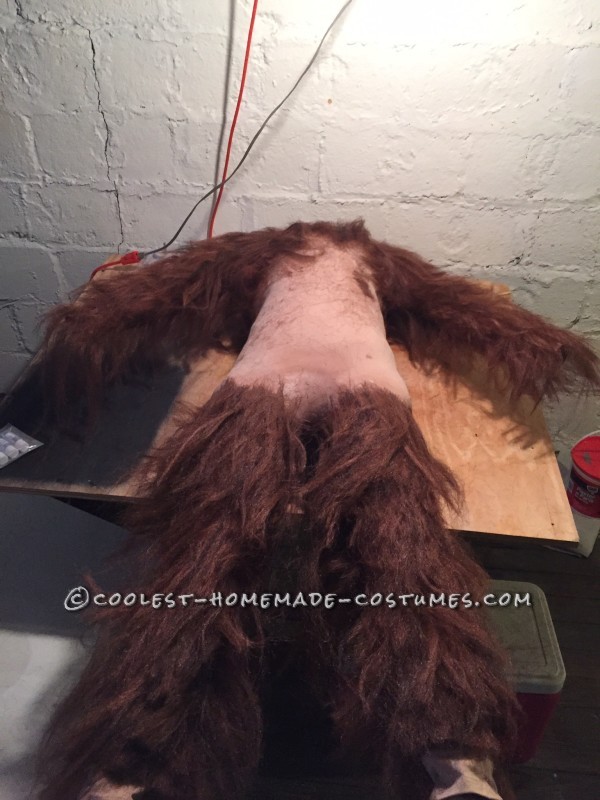 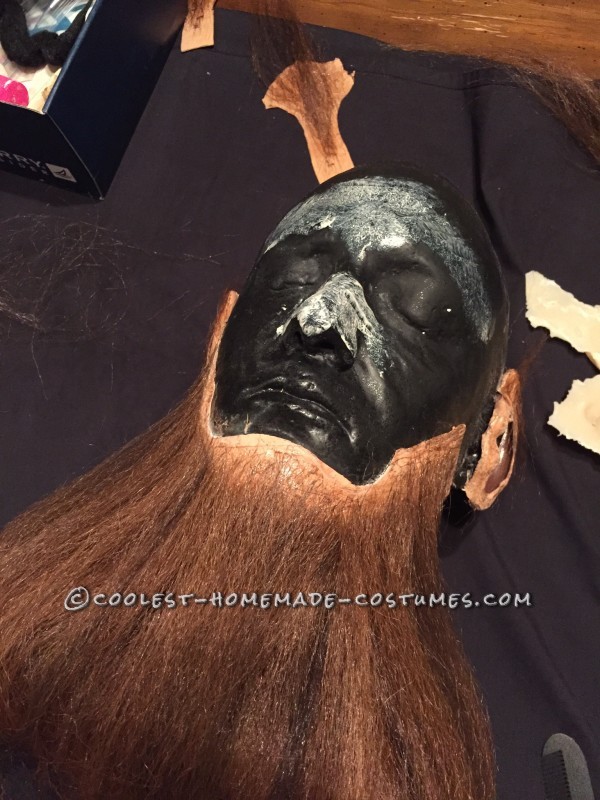 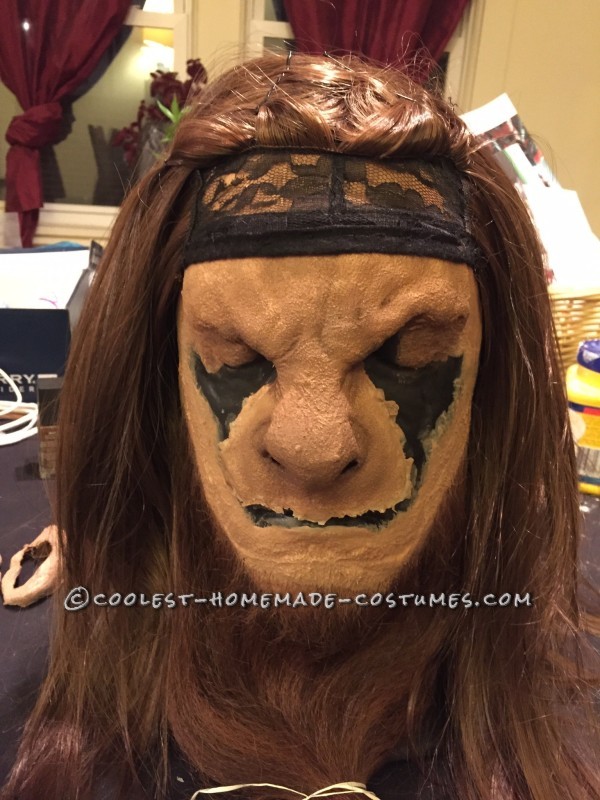 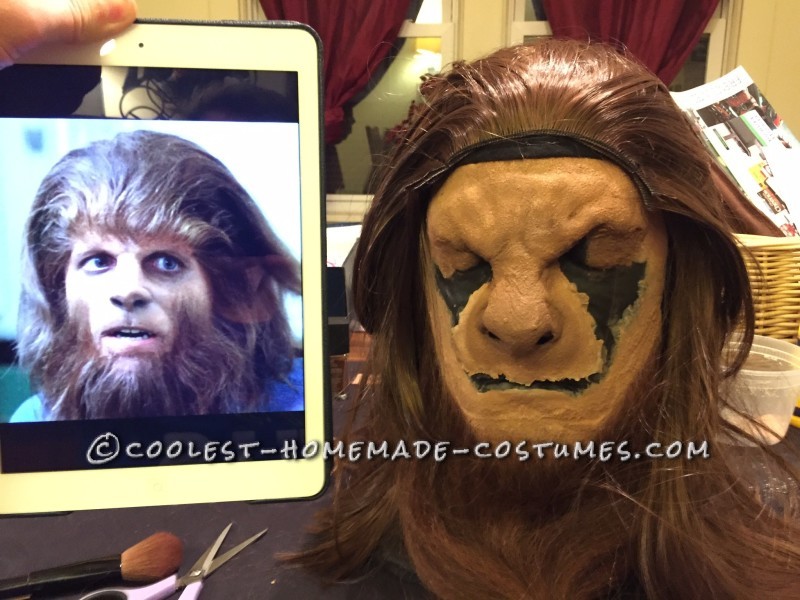 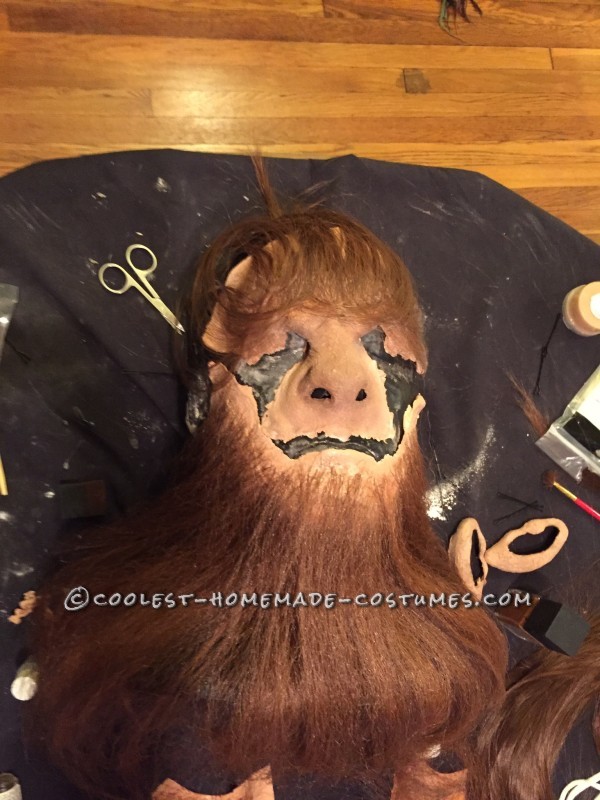 For my face, I wanted to make a beard prosthetic instead of trying to do this directly on my face the day of. This way, I could just attach the beard prosthetic and then just blend it in with liquid latex and makeup.

To start, I used skin colored Mehron liquid latex. This stuff is more expensive then cheap Spirit liquid latex but far better quality. Very stretchy and durable once set up. I began applying coats onto the neck, jaw, and lower cheeks of my head casting. I did about 10 coats allowing it to dry in between. A hair dryer is great to speed up the drying process.

After about 10 coats, I started on the makeup for the beard. Even though I was going to cover it with hair, I wanted it to still look like skin underneath. I sealed the makeup with Matt makeup sealer then started attaching hair with Spirit gun.

For the Hair, I purchased several packs of “Loose Hair” in different shades of brown. I got these on Ebay, I think they are used to make weaves or wigs. I took the hair and blended them together by taking chunks at a time of each different shade, layering them, and pulling them apart over and over until the shades were blended to my liking.

I have never created a beard like this or on my own face, but watched a bunch of videos on how to do it. Work with small amounts of hair at a time. Sections about 7-10 inches long. Apply Spirit gum to a section you want to attach the hair, tap it with your finger to get it tacky, then using a tool (I used a chopstick in half), firmly press the ends onto the spirit gum and roll the tool up and away from the hair. **Note, trim the end of the hair you are attaching into a straight line. This way you have a solid line to press into the spirit gum.

Do this from the bottom up, overlapping the hair as you work up to the face. once you get to the cheek line begin using smaller and smaller amounts of hair. This allows the hair to lay more realistically.

After I finished the beard, I Needed to customize the Werewolf prosthetic I bought from Nimba Creations. I needed it to go further up my forehead and I also wanted to cover it with latex and texture it more by stippling the latex on the look more skin like.

I purchased the wig from Ebay. I wanted one that was very long so I could cut some of the hair and attach it to my brow. I also needed to make the bangs of the wig flow backwards not down my face so I removed the front four sections of the wig which were the bangs and flipped them around and reattached with hot glue. I don’t have the finished picture but the last picture here shows them pinned into the position I ended up gluing them.

You can also see here more of the makeup on the prosthetics.

If you look in the picture on the last step, you can see MJ. Fox from the movie. His brow is consistent across his forehead and pulled backward. It flows in with his hair and just looks like his hair line goes all the way down to his eyes.

To replicate this, I took some of the hair that I trimmed and attached it to the forehead of my prosthetic using the same method I described for the beard. I started back on the forehead and worked towards my brow line, overlapping hair as I went.

So the most important part of this costume and the most challenging was to create a hair suit that would look like I wasn’t wearing a suit and that the hair is attached to my skin.

To start, I needed a mannequin so I had something to work on. To do this, I used an easy Duct tape method I found on YouTube.

After getting myself out of the duct tape, I taped it up and filled with tons of newspaper, tons!

Then I put the nude colored unitard onto the mannequin, I purchased this from NY dance company online. Ready to attach Hair!

So Much Hair – Suit and final Touches

I did a bunch of research into ideas I had on how to attach the hair to the suit. The best idea I came up with was using a spray rubber that would be flexible and would stretch when I put the suit on. Then I found “Liquid Tape” by Performix. This stuff was a godsend! Exactly what I imagined. I bought it at Harbor Freight. About $6 a can, I went through 10 cans.

To start, I did the legs, arms and chest on one side, then did the other filling in the edges to make sure there was not line down my side.

To do this, you want to lay out all the hair you have blended. Grab a small chunk at a time, less is better in this case because you want to hair to lay right so it looks realistic. Same as the beard. Spray a layer of the “liquid Tape” where you want to apply the hair. Take the section of hair you want to attach and fan it out evenly. Cut a straight edge and lay it across the prepped section. Then, take the liquid tape and spray another, heavier, layer across the hair. Using a tool (I used a chopstick again) push the glue into the hair line, rolling up and away from the hair. This creates a stronger hold as it gets the clue into all the fibers of the hair.

I did one layer at a time and worked my way up the leg or arm overlapping the hair each time. It takes a long time but just work slowly. Attaching more hair at a time to try to save time will result in “Patchy” looking hair. Like putting a toupee on your head, it just won’t look real.

One simple but very important step. I needed a way to go to the bathroom without having to take off everything. I decided to spray a heavy coat of the Liquid tape all over the groin area on the suit. I did this reinforce the fabric in hope that it would prevent it from ripping. Then I just cut a line where I needed it. It did reinforce the fabric and I was able to just leave it at that.

As I said at the beginning, I found someone online that could make a replica Beavers Jersey just like in the movie, BorizCustom. She did an amazing job, I was very pleased with the quality of her work. I found old school Adidas socks online at Zappos. I had an old pair of white shoes that I drew on the Adidas logo and stripes using a sharpie.

I had to use a sweatband to hold the hair out of my face even though he does not wear one.

All together, I am proud of keeping it “authentic” and realistic looking at the same time. It was a lot of work but the costume ended up exceeding my own personal expectations. Everyone was speechless and couldn’t believe that it was me under all that. So many compliments on the hair suit, people couldn’t tell that I was wearing a suit and actually thought I glued all the hair to my skin!

I would like to thank E.T. (my girlfriend) for all her help (and patience) in making this costume. I couldn’t have done it without her! Also, her costume was amazing as well! Everyone was blown away by her makeup.

Good luck to anyone that may try to do this, It’s a project but you will be happy with the finished product.