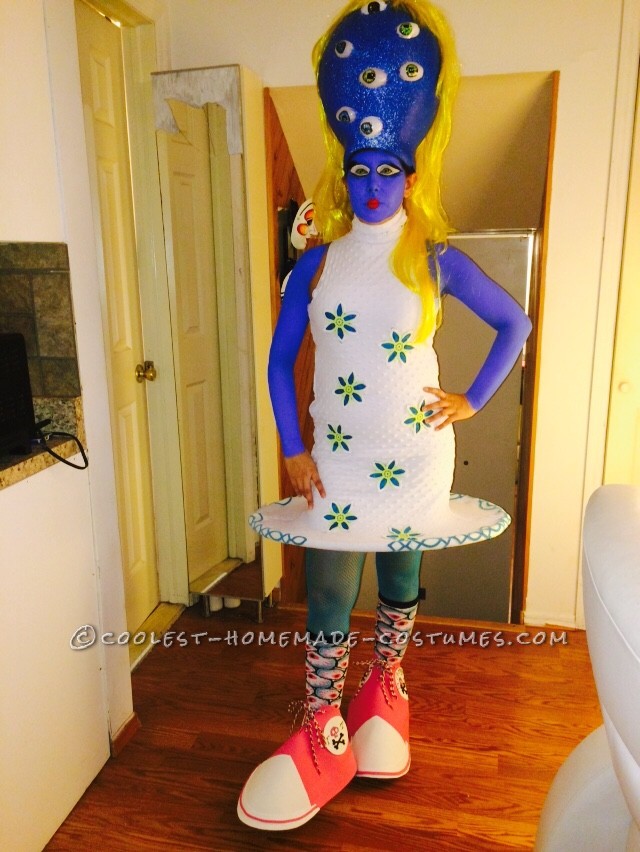 I am passionate about trying to reproduce Tim Burton characters for my Halloween costumes. In the past, I have done the typical movie characters by Tim Burton, just painting my face and wearing the appropriate dress. This year I wanted something more challenging. I came up with the idea of making “The Girl with Many Eyes” from the “Tragic Toys for Boys and Girls” book by Tim Burton. Being that the character requires a lot of high skilled fabrication, my boyfriend collaborated with me to make this girl come to life.

The first night I wore the costume for a party where more than 600 people attended, guess who won first prize for the woman costumes, THIS GIRL! 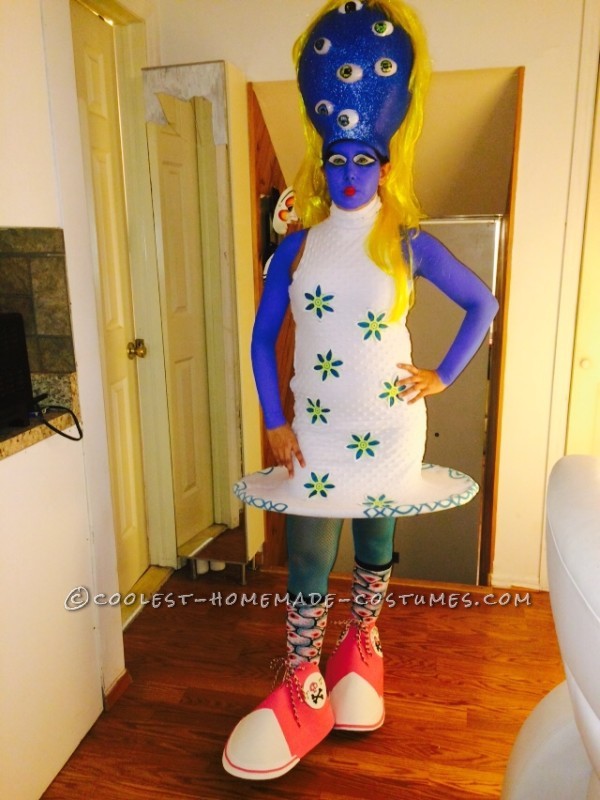 Girl with Many Eyes, my version 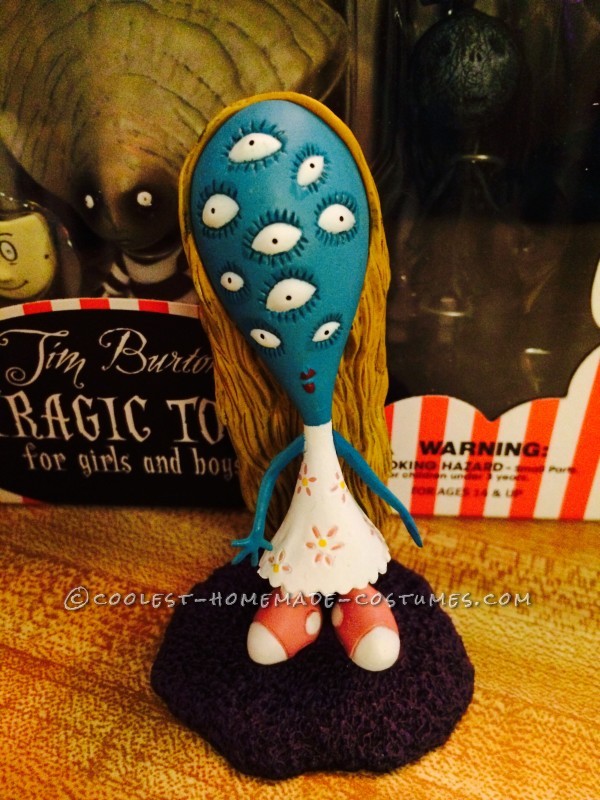 Girl with Many Eyes, Tim Burton

First, we had to come up with a game plan on how to make the big head. My boyfriend, who works with metal, fiberglass and carbon fiber, came up with the idea of building the head out of fiber glass. The first step was to make a mold made out of plaster of Paris for the fiberglass using a balloon to get the shape of the big head. Also, the top of my head was molded in plaster of Paris to make the base of the fiberglass head. 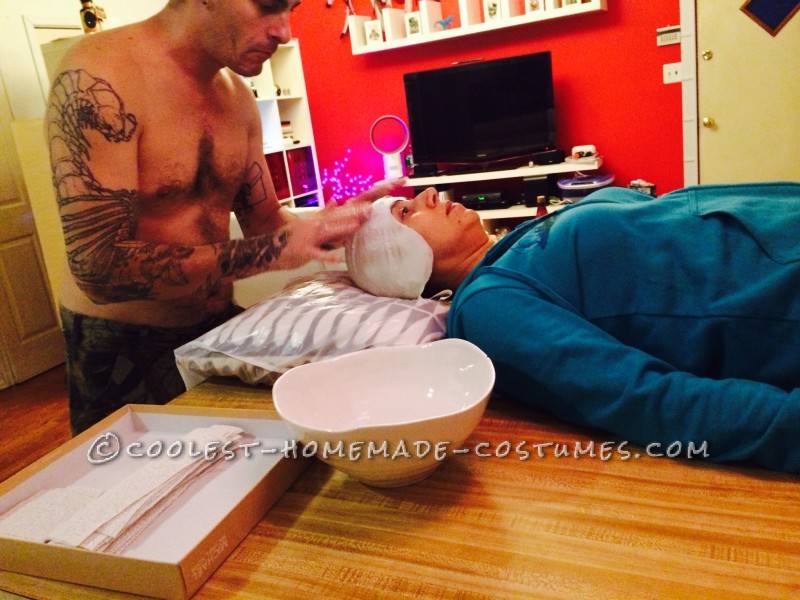 Once the plaster of Paris was ready, he proceeded to build the head with fiberglass. Once the head and the head base were done, he attached them to a forehead crown structure, so it will be attached to my head. With also the use of a welding helmet crown adjustment strap for a snug fit, countersinking rivets to the fiberglass between layers so it wouldn’t be visible . Measurements were taken to make sure it fit properly to my head to support the head’s weight and the wig’s weight. 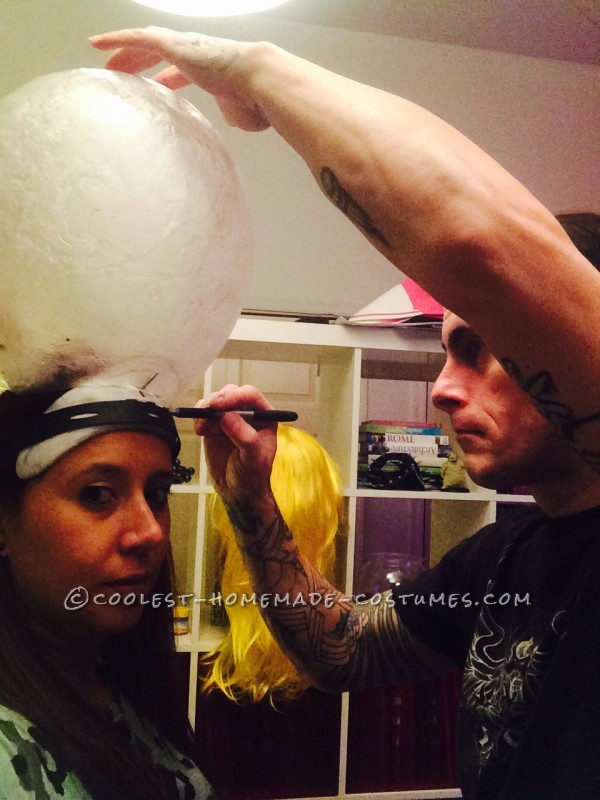 Fiberglass head measurements to fit on my head

At the same time, he fabricated the eyes with plastic Christmas ornaments cut in half and hand painted using acrylic paint for the blue, green and yellow colors and airbrush for the white base. 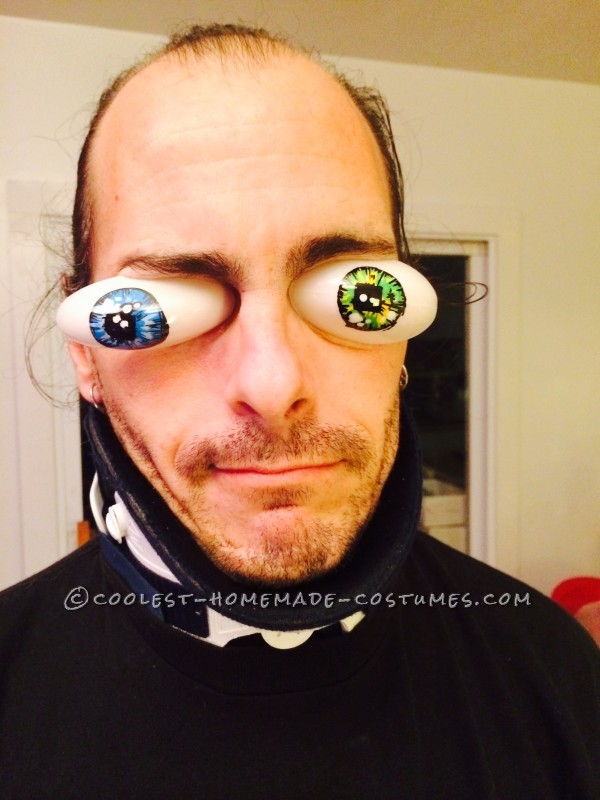 Detailed of plastic painted eyes. Note: he was injured with a broken back and neck, but was yet working on this dream costume!

Once the head structure was completed, he wanted to do the skin smooth on dragon skin (colored blue). He applied the dragon skin, followed all the steps and at the end; it failed , the skin melted and collapsed. Therefore, he proceeded to Plan B: He used Plasti Dip Blaze Multipurpose Rubber Coating color blue. Over this paint, he applied glow in the dark clear coat and a reflective clear coat over the top of the glow in the dark coat. 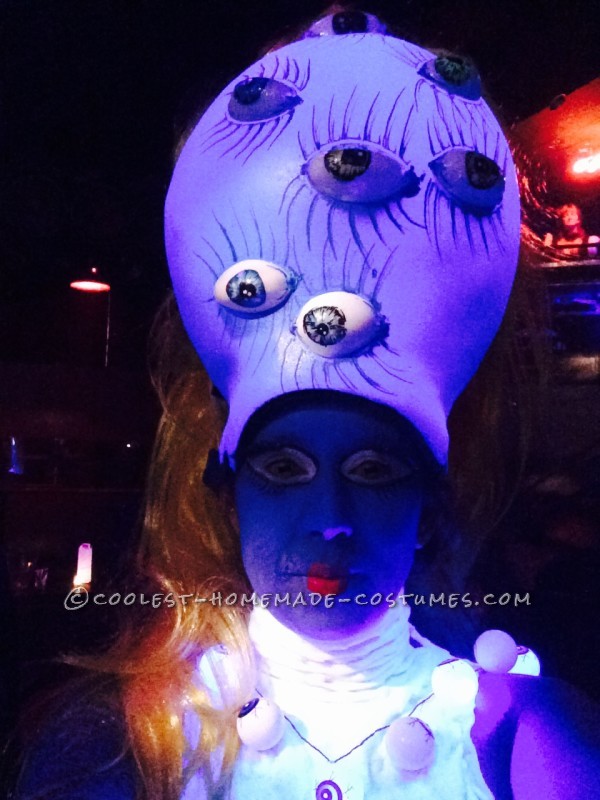 Head Glow In The Dark under black light 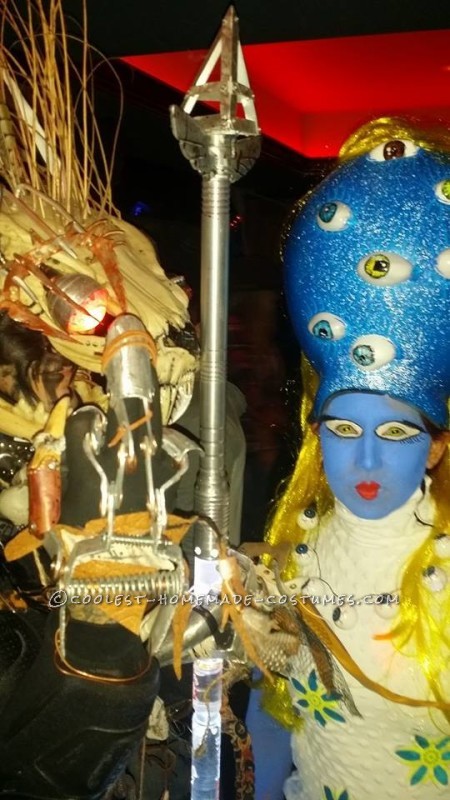 Head showing the reflective paint if a flash was used to take the picture. My boyfriend is next to me in his awesome costume too.

Then, he drilled holes through the head and install LED lights at the locations of the eyes from behind and ran the wiring throughout the interior of the head. So the eyes will randomly get lighted and strobe. Last, he glued the eyes and painted the eyelashes. The final step was to install the yellow wig. We bought three long hair wigs and attached them to the head with Velcro. They were attached to each other with a strap of the same fabric that I used on my dress. 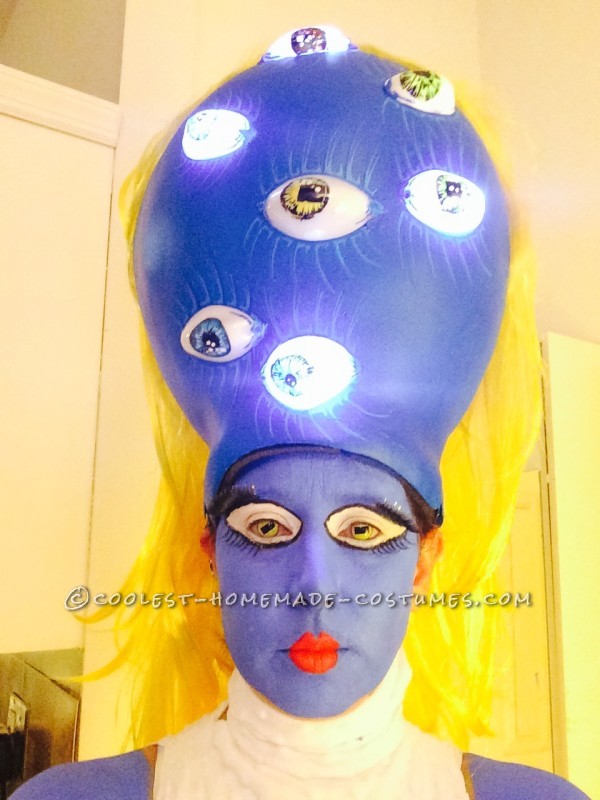 The dress was made out of white dimpled fleece. We used another piece of lace fabric with flowers, cut them and paint the center with glow in the dark paint and backed with a sparkle blue material to give the effect of “my blue skin “ showing through the flowered windows. The bottom of the dress was attached to a hula hoop.

The shoes were made out of thin pink foam with painted skulls. I did wear big platform shoes underneath so my new foam shoes will rest on them. With the Tim Burton signature to resemble the CONVERSE CHUCK TAYLORS .

I painted my face and arms with snazaroo blue paint and white face paint for the eyes. I used yellow contact lenses for my eyes to give the Halloween night touch to the face.

AND THE REST IS HISTORY . 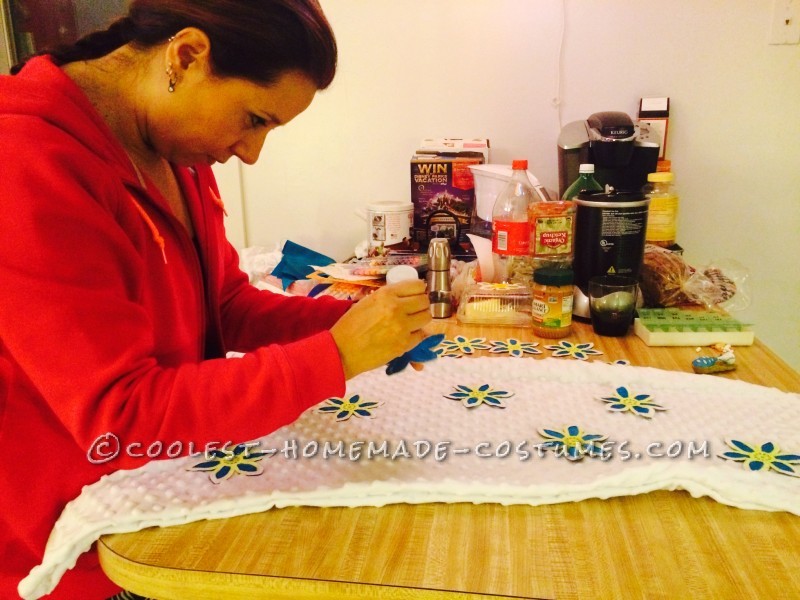 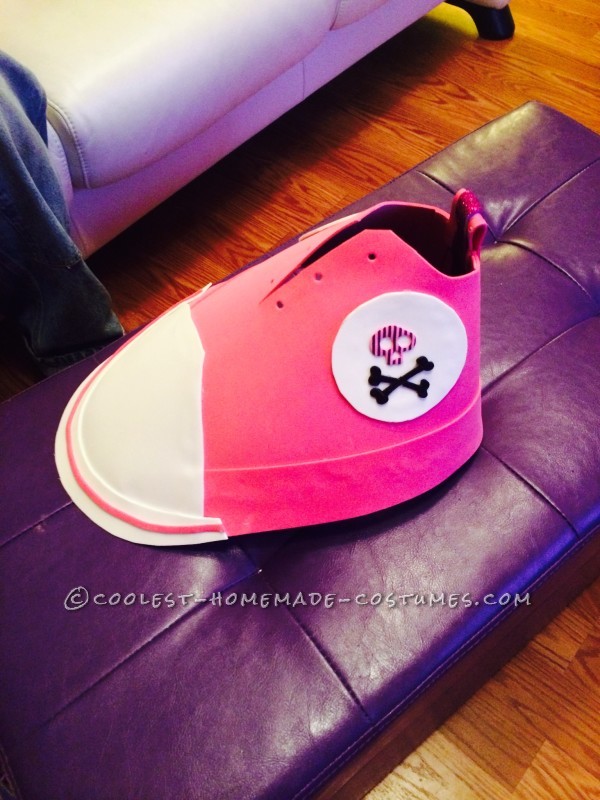