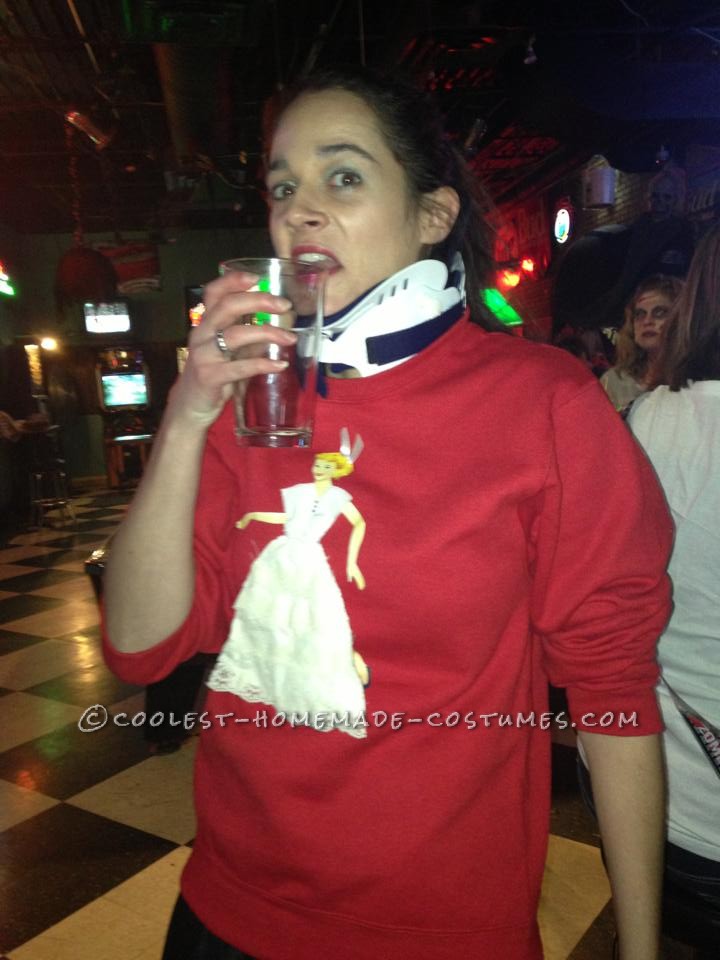 My friend Lisa broke her pelvis and two vertebrae in early 2012 and she needed a neck brace/C-collar to keep her spine in line. She remained in good spirits, though, and towards the end of her recovery time I saw her out at a bar after our mutual friend’s thesis reading.

I love the movie Sixteen Candles, and one of my favorite characters is Geek Girl #1, played by a young Joan Cusack in a body brace. Luckily, Lisa fared better than Geek Girl, but when she took a swig of her beer, I had a costume epiphany. After she was done wearing the neck brace, Lisa placed it on her porch for me and I left her a bottle of Stella in exchange. All I needed to do was make the sweatshirt.

Why I love Geek Girl:

She’s pathetic without being pitiful. Although her scene at the drinking fountain is funny because we sympathize with Geek Girl, she doesn’t inspire pity. Not once did I feel like she couldn’t handle whatever the movie threw at her.

She gets up and dances. Let me tell you, it is not easy dancing with a brace on. And mine wasn’t even tightened the way it would have been if I really needed it, nor was it a full-body brace like I’m assuming Geek Girl’s was. My friends applauded me for “staying in character” and moving awkwardly the whole evening, and some of that was me hamming it up, but a lot of it was because of the limited range of motion the neck brace allowed. But despite this, Geek Girl could be seen twisting it up with another girl and seemingly having a great time. No wallflower here.

She shows us being alone without being lonely. Only one scene shows her talking to anyone (Farmer Ted/The Geek on the bus), and she’s mostly politely nodding and responding to his pining over Samantha Baker. The rest of the time she’s doing her thing (standing against the wall, getting a drink of water, moving and shaking, trying to drink a beer). And she seems perfectly content doing so. I wish there were more female characters in shows who aren’t constantly in pursuit of/defining themselves in relation to a guy. 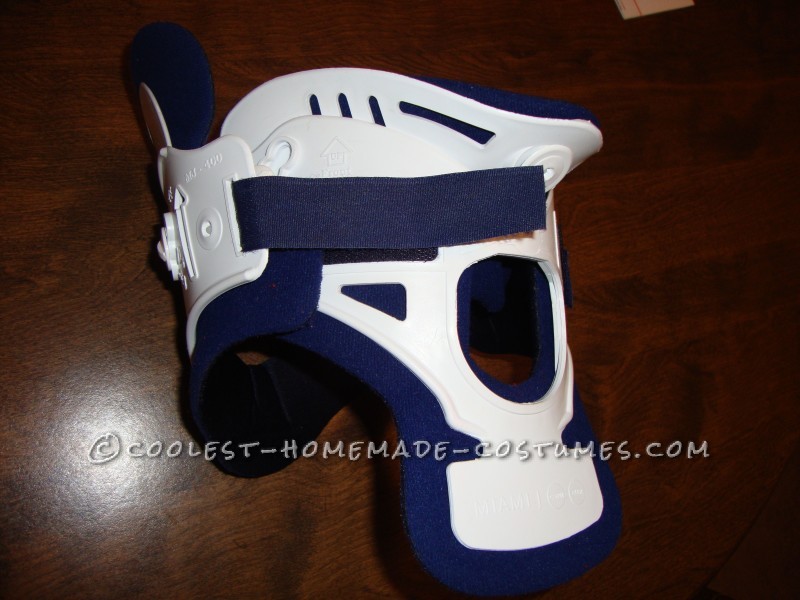 My first step was to purchase a red sweatshirt. They are surprisingly cheap online (the shipping cost more than the shirt itself), and the other fabrics were procured from my mom (I’m not sure where the lace is from, but the white fabric I used to make the shirt and skirt comes from an old dressing table of my grandmother’s). I love being able to use meaningful fabrics, and I try to re-purpose or recycle things as much as possible before buying new.

My mom and I did some initial sketches of the figure, just like they do on Project Runway. We paused and replayed the drinking fountain scene over and over to get it right. Mom also helped me find a paper doll to use: Trixie Belden, who was a character from a girl detective series from 1948 to 1986. It was really nice bonding with my mom while making this; she always made our Halloween costumes when we were kids, 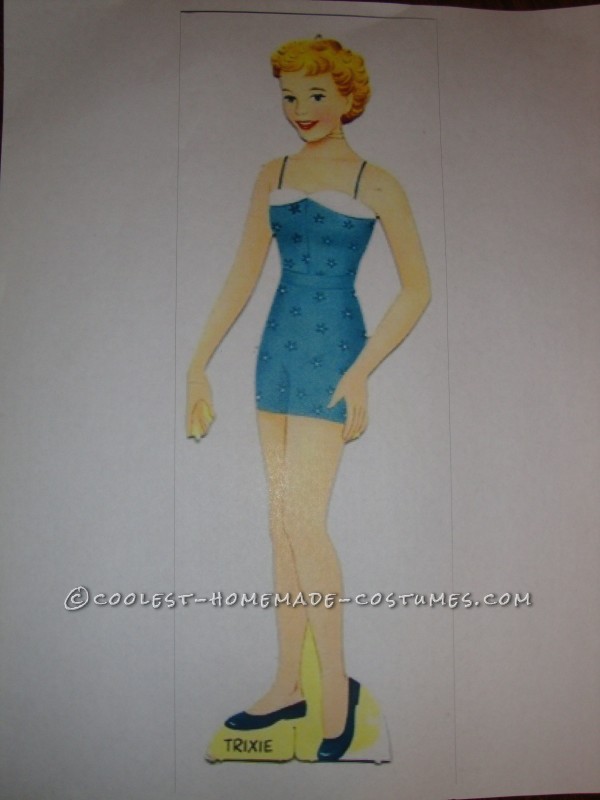 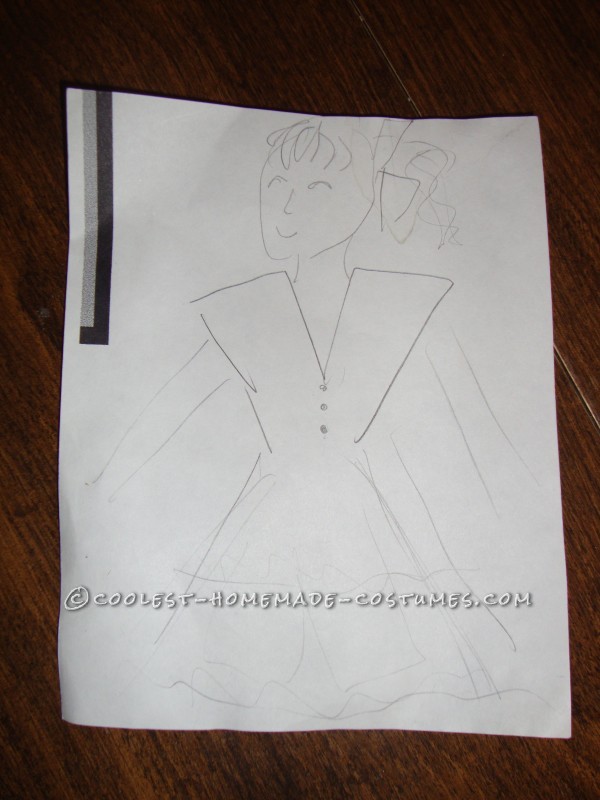 The doll on the sweatshirt Joan Cusack wears has a wide stride and is offering her hand, but the paper doll image I found of Trixie Belden was much less active. Her arms and legs were next to her sides, which meant I had to employ some Frankenstein-ian cutting and taping to get her to the pose I wanted. Her shorts were made from a dress my Aunt Joy gave me from her time as a missionary in China. It’s a beautiful fabric, but the dress hasn’t fit for years, so I’ve used it to cover a journal, and now, in a costume. I was thrilled to include fabric with such personal significance.

The white fabric originally belonged to a dressing table skirt of my grandmother. It made a nice top and under layer for the skirt. The lace came from my mom’s sewing drawer, and, knowing her, it came from something important as well. I had a hard time figuring out how to make the dress three-dimensional, but I ended up putting small cotton ball puffs between the top and the paper outline behind it, which gave it just enough shape. I felt a little bad about “stuffing” Trixie, but it was important to make it look realistic.

It was hard to see what Geek Girl’s sweatshirt looked like in the movie, since she’s not a main character and most of her shots are active, but I looked up photos online and re-watched the film, so I had a pretty good idea of how it was supposed to look. I didn’t have tiny rhinestones like she does, so I glued sequins down the middle instead, and the dress isn’t exactly the same, but I’m pretty happy with how it turned out.

One of the hardest parts was putting together the skirt. It’s double layered, with ruffles made of lace that I hand-sewed onto the bottom layer. It was time-consuming and frustrating, but it really makes the sweatshirt. I sewed it to the top of the dress, but I needed to be able to flip it up like Geek Girl does after she gets sprayed from the drinking fountain. It turned out pretty great. 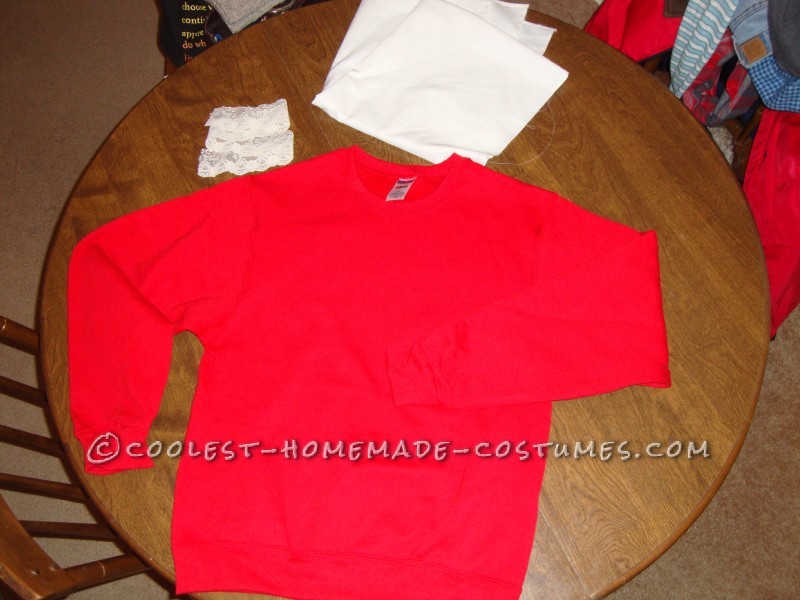 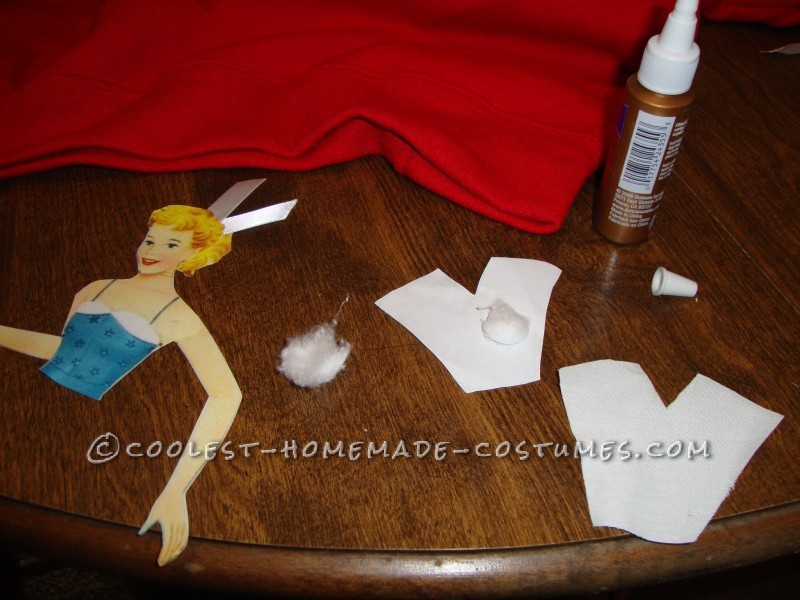 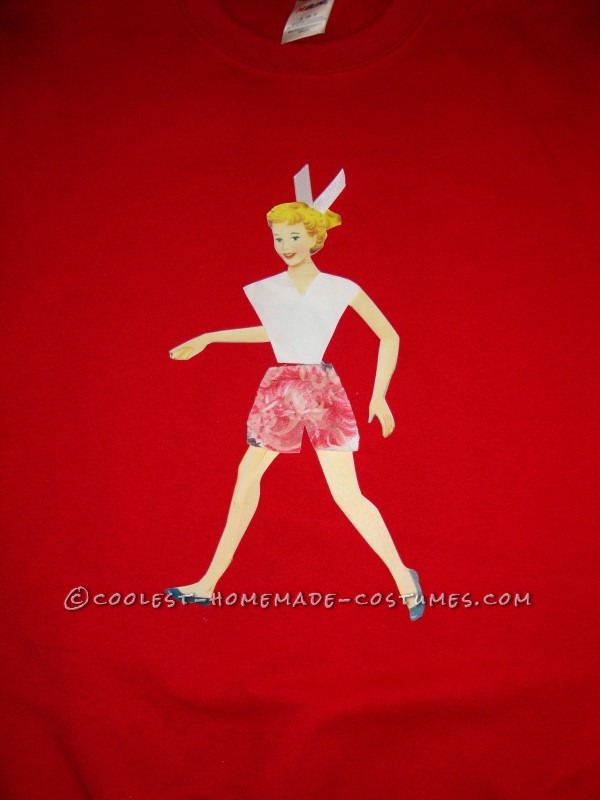 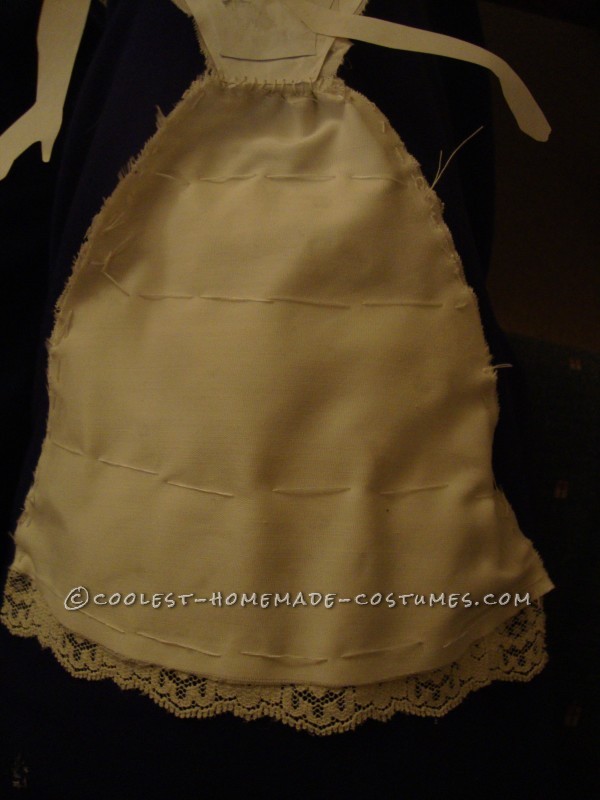 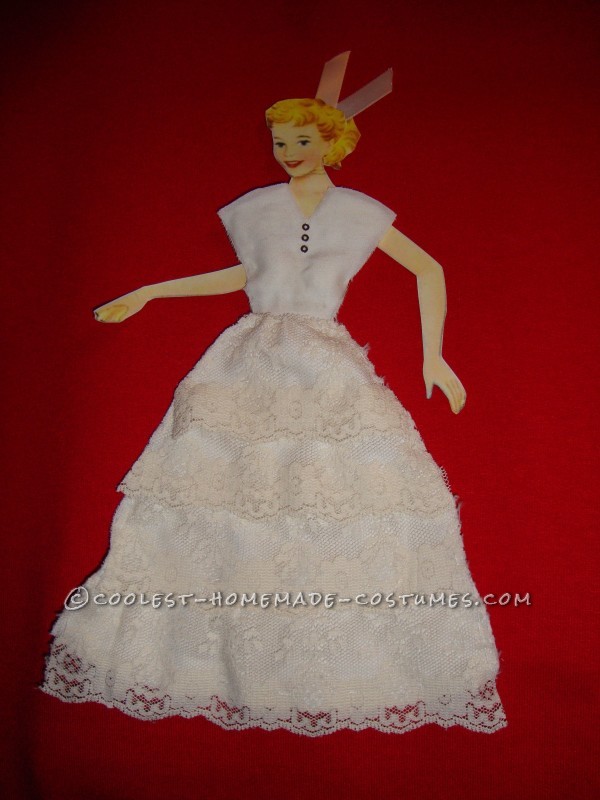 Throw it over the neck brace, add a jean skirt, black shoes, white rolled socks, 80s eye makeup, and a set of curls, and voila! Don’t worry, I took the brace off to drive.

I’m not the only one who loves Geek Girl; people at the bar I went to for Halloween chose it as the costume contest winner (by audience vote). I won $75 and a lot of admiration. I hope most people realized that I didn’t actually need the brace, though, because I got a few weird looks when I entered the bar!

I wrote a blog post about the costume and a woman who was injured and needed this same neck brace wrote to me saying that she knew what her costume would be for Halloween, and it made me really happy to know that I was able to help someone out. That was better than winning. 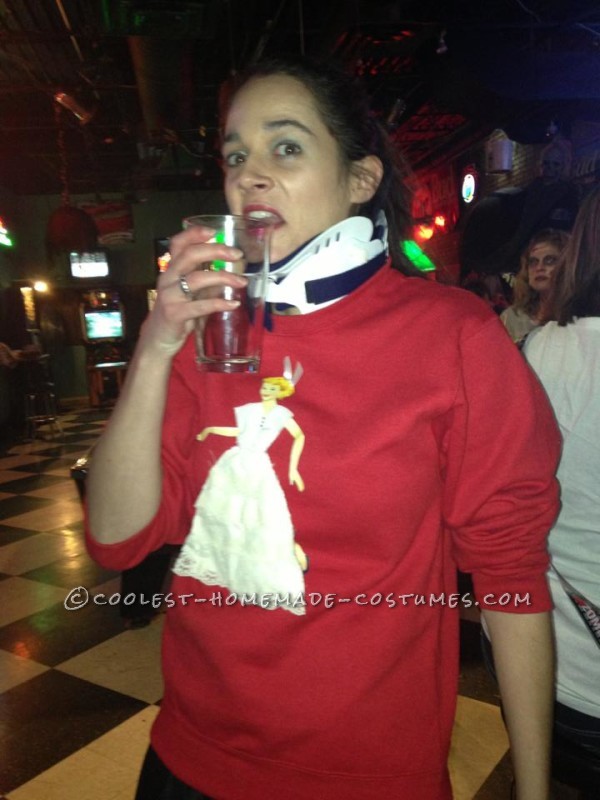