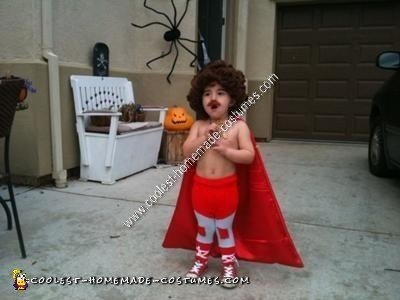 Well I made this homemade Nacho Libre kids Halloween costume by hand for my 2 year old son. He is a huge Nacho Libre Fan and wanted to be him for Halloween, but I could not find any costume in his size so I had to make it for him. It was fun and I’m even thinking of making next years costume too. It took me about a week to get all the materials together and actually make the costume.

The first thing I did was buy some Red tights and Sky Blue tights. The same day I found the fabric for his cape, 1 yard of red satin, all this cost $6.00 at the local Flea Market. I then went to Walmart and bought the Gold Tassel and Gold thread. Also I bought bonding tape for the cape since I don’t have a sewing machine (it worked great on the satin) it cost $1.50. I went to the 98 cent store on the way home and bought white gems that the cape has all over the fabric over the tassel (see pic) and some long white shoe laces.

I bought the Red Converse on EBAY for $5.00. So finally I was ready to start actually making it. I started by cutting the red tights like underwear and then sewing the blue tights under to make it be all one suit. I then used the foot part of the red tights over the Blue ones to make it look like the top part of the wrestling boot (see pic) I sewed it all by hand by putting a square piece of cardboard in between the tights so you wont sew together. Then with some leftover red tight I just cut out little squares and sewed over knees to make it look like knee pads. It came out looking cool.

I then put on the shoes with the big shoe laces and just criss-crossed shoelace to top part of the red tights just below the knees. For the cape I just followed a simple Do-it-yourelf cape off the internet. I just tweaked it a little by adding two pieces of fabric to make it thicker, warmer. I first sewed the tassel on one side so that when I bonded the two pieces together the seams wouldn’t show. After I just hot glued the “Diamonds” on over above the tassel. I then put the tie to the cape on and it was done.

I also had to make the wig, way easier then I thought. I found 5 hair pieces at a local store used to make a bun in your hair fuller I just cut out the hair tie and cut the hair at the seam, took some old black tights put them over something about the size of my sons head and cut off the legs sewed up the holes and just started sewing on the hair pieces till it looked full enough (see pic).

For the mustache I bought it from a vending machine, I darkened in his eyebrows and out him on a gold cross chain. He won 1st place at a local Fall Festival, and he got a lot of compliments for it on Halloween, he still has the cape on. 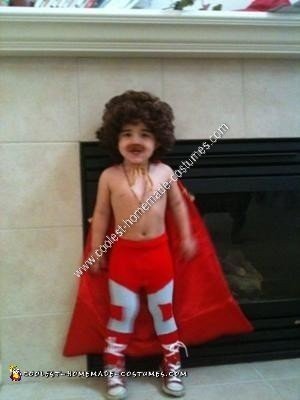 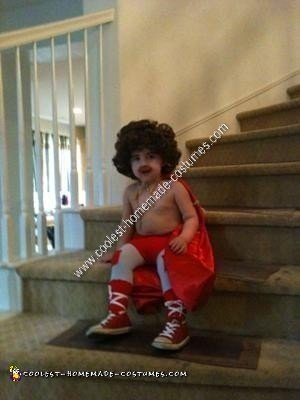