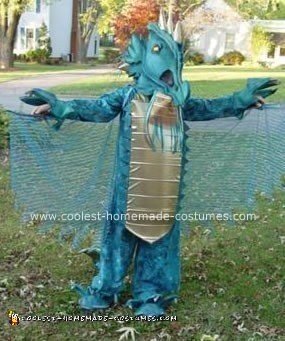 This year my 11-year-old son Cameron wanted to be a Dragon for Halloween. He has read tons of dragon books and loves Eragon. So we made him into Saphira the Dragon. Our family dressed up again to compliment his theme, we were Eragon, Aria, and my oldest son was a dragon slayer, it was really fun.

To make his Dragon costume, I started with Saphira’s head. I made a pattern out of paper and traced it onto ½” thick green foam, cut two pieces and stitched them together about 1 ½ ” from the top. This made it spread apart so I had room to add the spikes later. I then cut lots of pieces into triangles and hot glued them to the head to give it depth. I spray painted the entire head and then used craft paint to add shadows and highlights to give it lots of dimension. For the dragon eyes I used a gold silly putty container, then used a copper colored floral sprig and formed it into a point and then swiped it with white paint to highlight his eye. For him to see out of the costume I cut holes right behind his nose and added sheer blue fabric to match the mask. It turned out great!

On the top of his head I formed 3 spikes, I sewed foam and gold fabric together and hot glued them in place. For the back of his head I found some really great gold and blue holiday picks that I hot glued in place to add some awesome accents to his head. To finish of his head I used 2 inch wide wire copper colored ribbon and sewed 4 pieces together to form his neck piece and then added streams of blue ribbon on either side about 12” long.

His costume was so easy. I laid a long sleeve shirt and pants on top of the fabric and traced it out, cut it, sewed it together, and then cut a slit in the back so he could get into the costume. For his chest piece, I cut a piece of ½” thick foam about 12” wide and as long as his thighs and formed it into a point. I then took my gold fabric and ironed creases in it to resemble the chest of a dragon. I then hot glued the fabric to foam and then hot glued that to the front of the costume and cut out small triangle pieces and painted them and hot glued them to the sides of the gold chest piece.

For his tail I took a piece of ½” thick foam and folded it over and cut it into a curved shape, to have the tail swoop up from the back. By having the foam folded it added more dimension and thickness because the foam bowed out more. I sewed a piece of fabric in the shape of the foam and then stuffed the foam inside the fabric to have it completely covered. I cut a slit at the top of the tail and inserted his belt to hold the tail in place around his waist. I added 3 more spikes made out of gold fabric and foam and hot glued them down the tail and added a final winged piece at the tip.

For his wings, I took two pieces of sheer fabric with gold horizontal squiggles and made a pocket to insert a piece of rigid wire at the top. His wings would stay down by his sides until he lifted them up by holding the wire. I cut the bottom of the wings in a curved shape and then cut small triangles to resemble the dragon’s feathers. I sewed a piece of felt up by his shoulders to join the two wings together and then secured some elastic in loops for him to put his arms through so he could easily take on and off the wings.

For his hand and feet, I made claws out of ½” thick foam and really just formed shapes by pinching and sewing the foam. For his feet I made a hole in the center of a piece of foam and attached elastic to the bottom to slip under his shoe. Then I cut 3 triangle pieces and hot glued them on top of the foam and pinched down the point to make a claw nail and then I painted it and highlighted it with craft paint. For his hands I made the foam in the shape of a cuff and added 3 long spikes and pinched the ends to resemble the claw nails. It was very easy for him to take these on and off when he wanted to eat some of his Halloween candy.

I love this years costume and love that I was able to make him into something that he truly enjoys! Dragons! In one of the pictures he is trying to fly.

The total price for this costume was more than I typically spend, but my son picked out all the fabric himself, and I loved it, although his wings fabric was $12.00 a yard and I needed 2 yards. It ended up costing me a little more this year but well worth it!

He loved every minute of trick-or-treating, What a great memory! 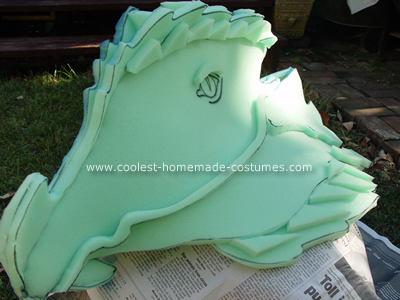 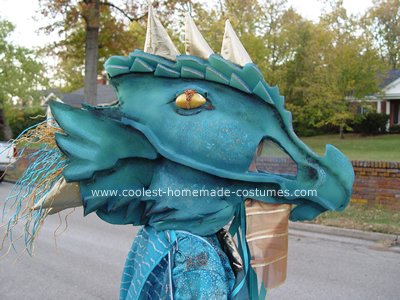 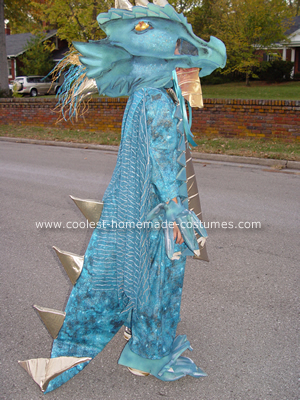