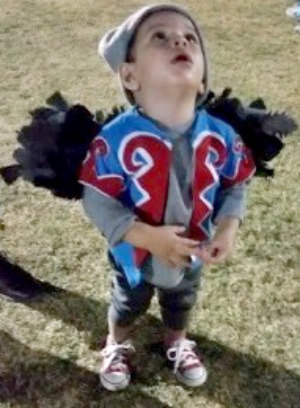 There was an idea that became a reality in the home of Makxon Cash in 2016. The toddler monkey Halloween costume idea started in July of 2016. It came from the imaginative mind of Makxon’s mom (my daughter), with her creative vision for her favorite time of year, Halloween!

We are kind of fanatics when it comes to costumes and Halloween. When we see something that can be used for a costume, we get it and all the friends and family know it too. They often call to see what they can borrow or if can make for them. Now that her son is mobile and bigger, there are so many more choices to make. My daughter had to narrow the choices down to one. The ‘Flying Monkey’ of ‘Wizard of Oz’! Like in past, she had the vision and I made it a reality! I try… So we talked about what she wanted to have Makxon wear for his toddler monkey Halloween costume. Including dark wings, jacket, hat and grey body wear. We are huge fans of ‘Wizard of Oz’ so that wasn’t hard to visualize it.

At the end of September we bought a yard each of grey and blue felt material and black, dark grey, red, and white felt squares. Time was passing very quickly and I still thought I had plenty of time as it was going to be not difficult to make. Mid October was here in no time and I knew I better get on it. So yes, I was OBSESSED with getting it done! I was so excited as I watched it come together.

I started to cut the red and white felt to make the designs on the jacket and the hat. Then, I cut the grey yard of material to make his headpiece and tail and wings. I bought butterfly wings at the dollar store and made sleeves to slip over the wings and sewed them at the base.  Makxon’s grandfather helped out by cutting the dark grey and black felt squares into feather shape pieces for the wings. I also purchased some black feathers to add here and there on the wings for more texture. Makxon’s mom glued all the feathers together on the wings.

We used one of Makxon’s shirts that would be slightly big on him for a template to cut his jacket out of the blue felt yard. I made a trim for the collar, sewed the arms and bottom of jacket with a hem. Then I sewed the red and white design on to the blue jacket’s front and down the middle.

I put a cardboard inside jacket to cut the middle design down the middle to have two part sides of front for the design. I used a pizza like sewing tool. Unfortunately, I ended up cutting to deep that I cut a few spots on back side. I thought about sewing it together but it wouldn’t have looked good. So I cut another red felt zigzag design and sewed it on down the middle to fix the cuts. I put 2 buttons on top to have an option to button the top. Then I sewed the red and white design onto the sleeves edges and tacked them with stitched to keep down. I should had sewn the red and white felt design onto the sleeve before sewing the sleeves to jacket part, live and learn!

At this time it was within the week before Halloween and I am literally staying up till 2 AM to get as much as I can completed. Starting some days later than I wanted to but life still goes on and responsibilities come before your hobby…but this was a job that had to be completed within days! So, I was determined to finish it. I had some trouble with one of the sleeves and side of the jacket but went to sleep to not mess it up. I had to get some mental awareness on fixing it and fixed it.

The hat was made out of a small plastic snack container. I sewed an inch wide band to slip onto edge, hot glued the red and white design around the container. Then I hot glued the hat onto the grey headpiece. Made this huge tail with wire and stuffing with grey material and was way too big and heavy for Makxon. I got carried away with the curl of the monkey tail so that will be used elsewhere. I had to make another, which was a 1/4 of what I had originally made!

It was all FINALLY completed by noon on October 29th. I tried to put Makxon’s wings on him without his shirt with elastic bands that came with the ‘butterfly wigs’ and he did not like it, he was saying ‘Owie’, which was not good to hear knowing how much time I had put into it and it looked too good to not wear them! He was a bit scared of them too! lol Maybe if he had a shirt on or let’s just safety pin the wings on his jacket and won’t know it! So we did and it worked!

I was also concern about him keeping the headpiece on as well. He would leave hats on and hope he would leave the beanie like headpiece on. We tried the jacket on him quickly to know if it would even fit him! It did! Thank Goodness! All came together with the purchase of grey sweat bottoms that were narrow at the ankle and a grey long sleeve shirt. He wore red converse for his shoes to match his red accents on his jacket.  Needless to say, my labor of love turned out just how we envisioned and our “Little monkey” as we call him was transformed into a “Flying Monkey” for his Wicked Witch Mama and Scarecrow Dad! 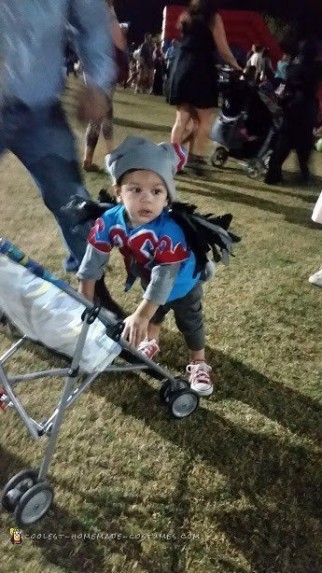 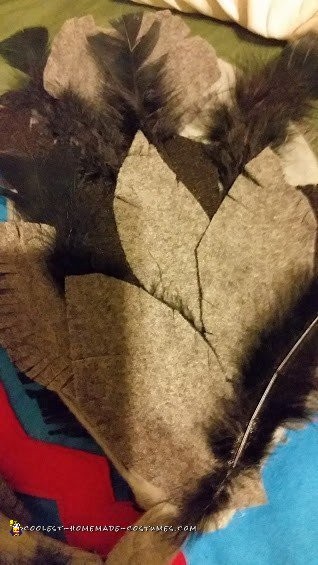 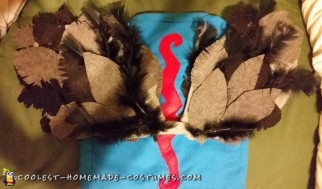 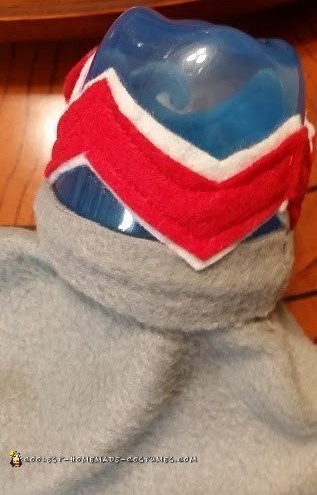 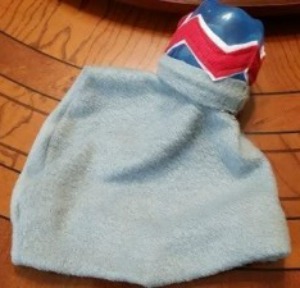 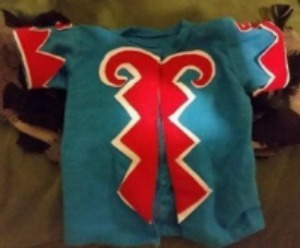 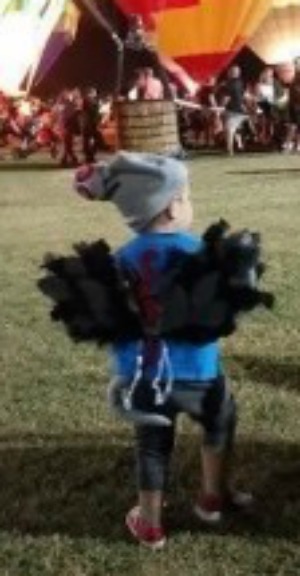