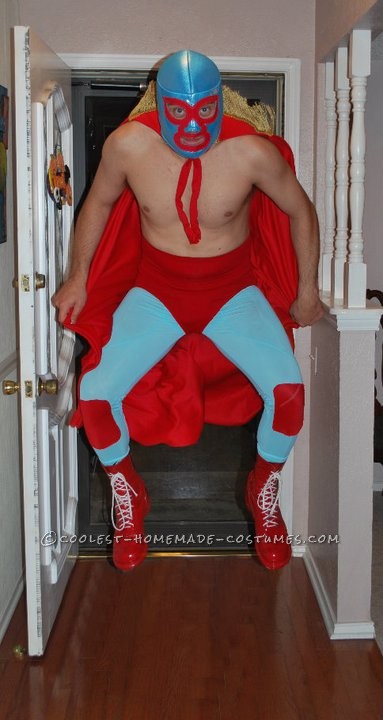 The inspiration for this Nacho Libre costume came as we were shopping in a local store one day and saw a variety of authentic Mexican wrestling masks. After deciding the Nacho Libre mask was the one we had to have, I embarked on my journey to re-create his outfit for my husband for Halloween.

I started by buying mens white running tights which I dyed turquoise using Rit dye. I then searched thrift stores for combat boots which I spray painted red and added new white laces. I purchased some red stretchy fabric which I used to sew patches on the knees and to make a cape. I sewed gold fringe on the back of the cape. The last touch was complete when I was able to find XXXL women’s high waisted red panties.

This costume was a huge hit! My husband wore it to a couple of Halloween parties and was pretty much the talk of both parties. He also played a gig with his rock cover band in this costume which was a riot! My husband was pretty embarrassed (and cold) to go all night without a shirt on, but luckily he had a mask on so no one really knew who he was! Many of his friends said he was “epic” for his costume that year.