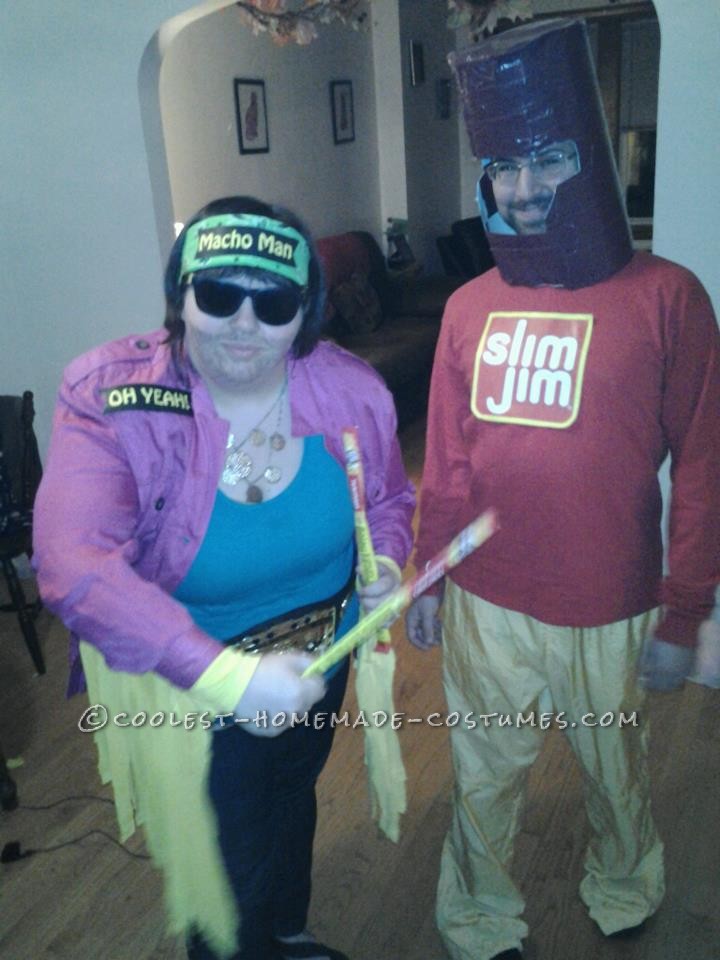 The Costume:   Amy as Macho Man Randy Savage and Joseph as a Slim Jim.

This is the first and probably only couples costume my husband and I will ever do. We both have very different ideas of what we want to be each year, always homemade. In the past I have been Chester Cheetah, Teen Wolf, a baby dinosaur, a dead camp counselor, adult baby. Joseph has been Shredder, Staypuft Marshmallow man, a breastfeeding mother, Alladin, Bender in drag or “Gender Bender”. This year the costumes started with me wanting to go as Macho Man Randy Savage.

For this child of the 90’s, Randy Savage was a beloved character of WWF and Slim Jim commercials. By chance we got to go to a WWE Monday Night Raw in Chicago that year and a Macho Man impersonator stole the show. We joking yelled “OH YEAH” to each other for weeks after that. At a flea market, I found a plastic toy wrestling championship belt and bought it for decoration. I glue jewels onto it, of course. When it came time to think about what to make for my costume I did what I do every year:  look around my house for stuff I already have to use in a costume to cut down costs and gather inspiration. I glanced at the championship belt on the wall in our office and huzzah!  The idea to dress Joseph as a Slim Jim came up because we had done the same rolled up poster board mask for him to be Bender one year.

Macho Man: The base of the costume consisted of the toy championship belt (which I had to sew elastic onto) and all the neon tight clothing I could find in my closet.  Then I knew I want to make a sweet fringe jacket. I found a good hot pink jacket for $3 at a thrift store, keeping with the neon theme. Then I took an old t-shirt, cut fringe into it and sewed equal parts to each arm. You can actually see the “Fathers Day 5k Run” text from the t-shirt on the back of the fringe LOL. The printed “Macho Man” bandanna and “Snap into a Slim Jim” on the costume were just added touches on printed paper, mostly done to hammer the point home.  My facial hair could have been better, but I’ve worn a fake beard before (as teen wolf) and it sucks.  Then the hard part:   trying to take my girly girl voice and replicate his catch phrases in his gruff tone.  I was damn hoarse at the end of the night.

Slim Jim:  Like I said, we had used the same tube shaped poster board mask trick to make a Bender costume one year, so this part was easy. Finding the beef jerky colored duct tape was not!  Also finding yellow pants at a thrift store was a challenge too. But add the yellow pants, red shirt and a logo print out and you got a Slim Jim.  A super cute one to boot.

This was one of our craziest Halloween’s ever because we went on a party trolley that night. All the other girls on the trolley and in the bars had their sexy skimpy costumes and I am a professional male wrestler. You can tell I have no shame. And I was super excited when I met another female Macho Man at a club that night!!

The streets of Chicago are filled with costumed party goers on Halloween, so it’s fun to just walk around in between bars.  The laughs we got waling down the street were constant, mostly from the male persuasion.  I also got a lot of compliments from male friends of how hilarious and ballsy it was that I was Macho Man.

This may be our one and only couples costume, but it sure is a good one!

BTW:  I am throwing in some photos of some of our greatest hits of homemade costumes so you can see we are FOR REAL and ones to watch. 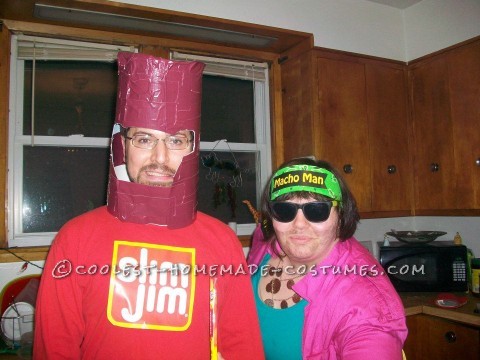 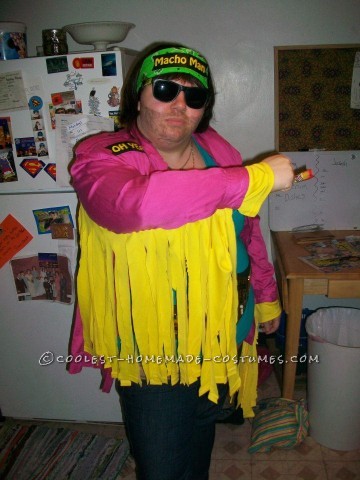 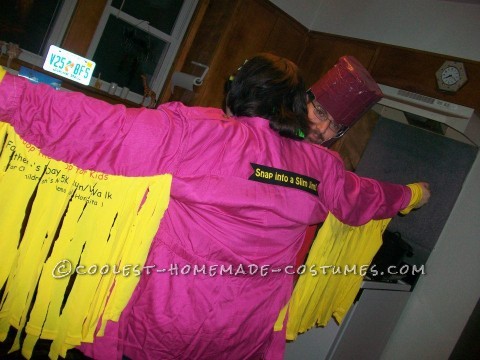 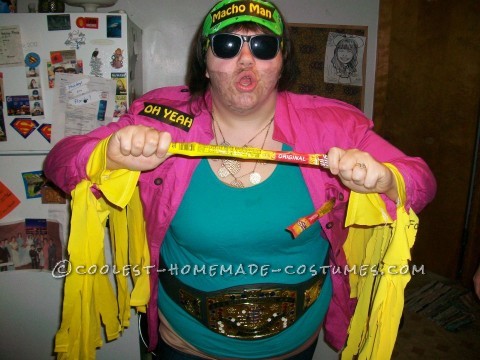 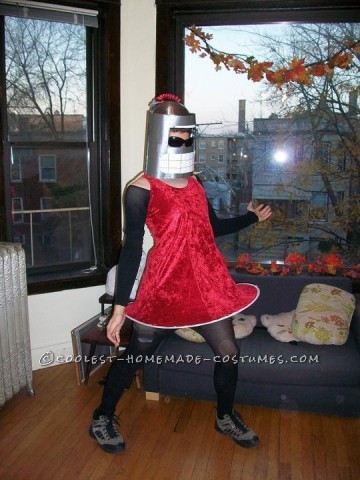 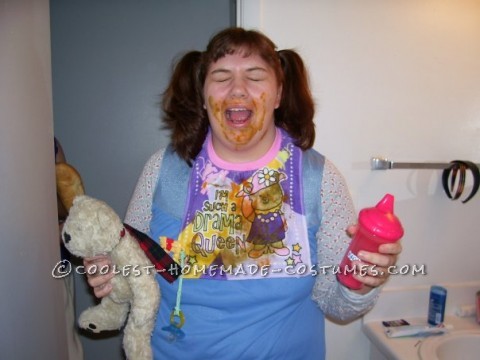 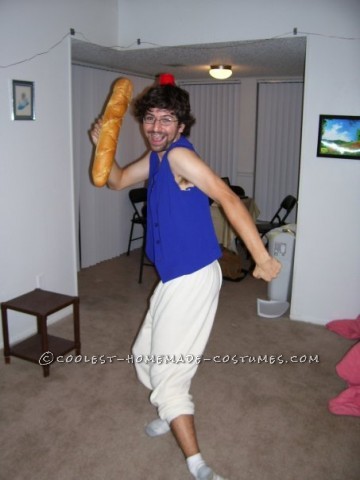 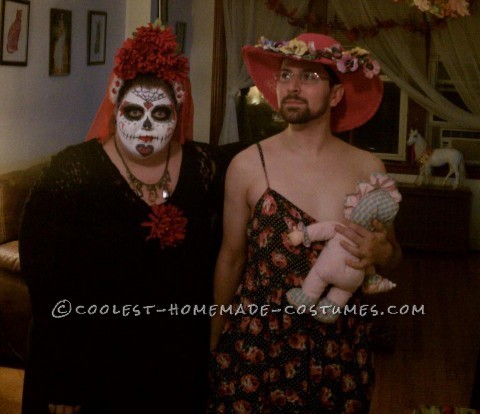 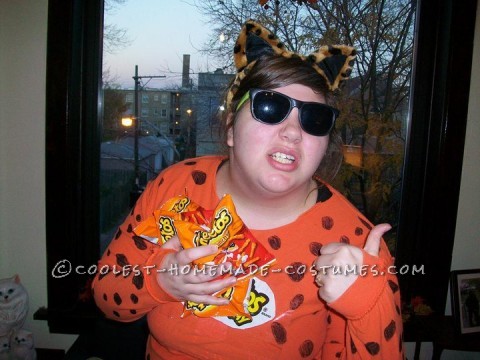