On May 20th I was on the internet and was just kind of going through different news websites and came across Macho Man Randy Savage Dies in Car accident. I definitely could not pass up reading the story due to when I was a kid I enjoyed watching pro wrestling and he was quite big back then. So I dug into reading the story and saw that he had passed away. After reading the story I started looking at different videos of him on YouTube. The videos you find are quite hilarious especially some of the SlimJim ones.

Then an idea popped in my head, hmm, the perfect Halloween Costume. That’s where this Homemade Macho Man Randy Savage Costume started, was the earliest I’ve ever figured out who I was gonna be. I’m usually one of them last minute guys.

It started getting closer to Halloween and everybody’s asking each other what they are going to be etc. People asked me and they just started laughing and said how are you going to do that. I simply said you will see. Halloween snuck right up on me because I was busy with work and other stuff. So I started making my costume the 24th of October, yes, last minute I know. So after researching pictures of him for an hour or so again I set out that night on the venture to find my Homemade Macho Man Randy Savage Costume.

I started off going to a Halloween Store where I found just a plain cowboy hat, black face paint, black hair wig, and some plain glasses that have the bars running across them. Next I was on to another store known as savers which sells used clothing, this is where I got just a plain Women’s leather black coat.

After this store I went to another store that I knew would have all the stuff to finish my costume, Wal-Mart. Here I got red and yellow duct-tape, red, yellow, silver, paint pens, 3 yards zebra print material, SlimJims, Black Spandex, kids WWF Wrestling buckle, and boxing hand wraps. After buying all this stuff I went home and began creating my Macho Man Costume.

I began first by coloring my cowboy hat with the paint pens. I put a big M in the center cuz that was his usual hat wear and also added a bunch of crazy designs all over it. My glasses started off a light blue and I added the letters M-A-C-H-O all the way across them with my paint pens. Next I had to tackle the jacket which I knew would be the hardest. I duct-taped one side all red and the other all yellow, then used my paint pens to decorate the duct taped sides, and yes I am an artistic guy.

I then cut a bunch of strips out of the 3 yards of material. Some of these I used for the arms of the jacket which I zip tied the tassels to the coat. I also added a final touch to the coat by using vinyl stickers in which I put Macho Man down the sleeves and OH YEAH on the front and a big MACHO MAN on the back. I then needed to find cowboy boots and remembered my grandpa had boots I could use. I added red duct tape to one boot and yellow to the other and wrote MACHO MAN on one boot and OHH YEAH on the other. I then strung and tied a bunch of tassels together to use for right above my boots.

It finally came to Halloween weekend and the day I had to become the wrestling star. I started putting on the costume. I put on the black spandex and took duct tape and wrapped it all the way up and down my legs to give it the crazy look. I then put the tassels right below my knees and through on the boots. After this I just put on a plain red shirt and then my jacket. After this I had to strap on the championship belt which was a little small for an adult so I had to add some zip ties for length.

Next was the beard, I started growing the beard a week and a half before and all I had to do was add some coloring to the beard. The hair I bought was next followed by the customized hat on top. Then another important part were the sunglasses and also the Slim Jims which I tucked in the buckle.

After all this was complete I was now transformed into an Elbow Dropping Mach Man Randy Savage . OOOOOHHHH YEAAAAHHH BROTHER. I then Set out on my night and went to a Halloween party where I was throwing out some of his lines such as, SNAP INTO A SLIM JIM, OHHHHH YEA, BROTHER and much more I learned off Youtube. I was also handing out Slim Jims. No one had no clue who was under the Macho Man Costume. At the end of the night I was voted BEST costume out of tons of people. I had an amazing time being the macho man and would recommend it to anyone. R.I.P. Macho Man Randy Savage. 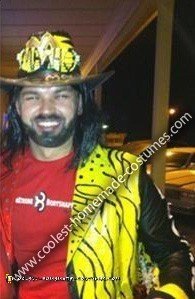