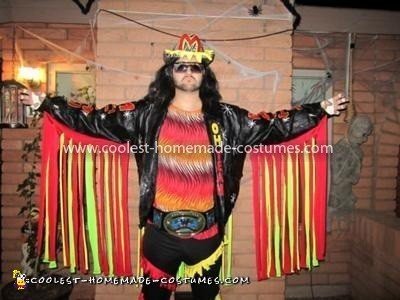 As we know the infamous “Macho Man” Randy Savage died earlier this year, and it just so happened to be on the same day the so called predicted rapture was supposed to occur. Macho Man had a heart attack and died that morning and died in a car accident, and I believe he died to save us.

In homage of his bravery and also because he was my favorite wrestler growing up I wanting nothing less but to pay honor to him by making a glorious costume and dressing as him for Halloween. First I wanted to do an angel or Jesus type Macho Man, but I decided that I wanted to stay true to his character and be the Macho Man everyone remembers; the intense, flamboyant and over the top wrestler with the one of a kind guttural voice that’s in your face…

To start off, I found a black leather jacket at a thrift shop for $7 and purchased 6 yards of neon green, yellow and red spandex fabric. I sewed the fabric to the under arms of the jacket and along the back. Then cut the fabric into strips.

I used fabric/puff paint to paint the “MACHO” on the back of the jacket and both sleeves and white asterisks to give it that extra flair. On the front of the jacket on either side of the zipper I attached letters that spelt out “OH YEAH” on the right side and “MACHO MAN” on the left.

The shirt was a woman’s blouse I found at a thrift shop and added additional material on the sides so that it would fit me better. The belt was bought at a toy store and I attached cardboard and black duct tape to make it large enough to wrap around my waist.

I glued a large ‘M’ on the front of a zebra cowboy hat and glued extra yellow fabric left over as fringe around the brim of the hat. We found a pair of 80s style glasses and put hologram stickers on the side and front.

The pants were from a ninja Halloween costume that I didn’t wear so I decided to sew more neon fringe around the legs of the pants and on the ankles. They worked out perfect as wrestling tights!

The beard is Free being that it took me a month to grow out, but the hair was definitely a wig that was cut to the right length. I was not about to grow my hair that long… and I didn’t have the time anyway.

I finished the look off by taping up my hands and fingers like Randy Savage did and grabbing a handful of Slim Jims! Oooohhh Yeeeaaahhh! Snap into a Slim Jim!! 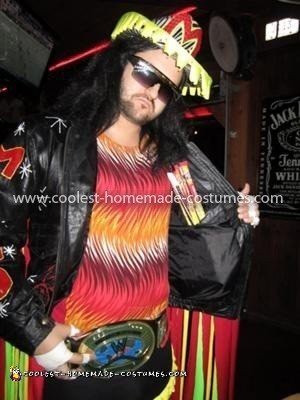 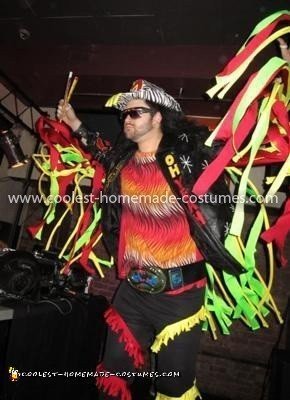 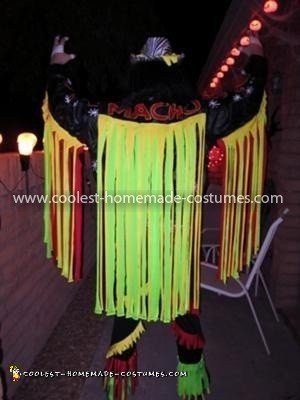