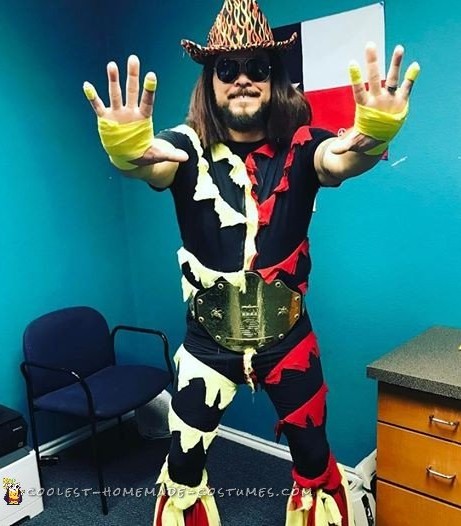 Snap Into a Slim Jim!

“Wanna light up your life? Need a lil excitement? Snap into a Slim Jim! A little beef and a little spice, with everything nice!” This was my inspiration for my Macho Man costume.

I created my second Macho Man costume for the Alamocity Comic con this past May 26-29 Memorial Weekend. I’ve been wanting to make more and more Macho Man outfits because lets face it, he was awesome. Macho Man was the greatest promo guy in the business. The Rock I would say is the closest to the Macho Man’s level in promo’s.

Anyways I spent probably around $50 to make this costume.

I first purchased black tights and shirt from Academy for around 25-30$. Then I purchased red, yellow and flamed fabric for about $10. Also, I purchased some elastic for around $3. I used the elastic to make the fringe around my boots. I bought a hat from party city for $5.

The only thing I was missing was the jacket. I couldn’t find any cheap ones and I wasn’t going to spend a $100 on a new one.

Putting it all Together

After everything was collected now was time to assemble everything. I put the shirt and tights and began to draw with a silver sharpie so I can see where I wanted to sew the material to the fabric. Yellow on the right side and red on the left side.  It took some time to sew all the pieces to the shirt and pants being it was my first time sewing. After all the pieces for sewed on, I began to trim the fabric to look more torn and to replicate the famous Slim Jim outfit.

I made the hat by just simply using hot glue to attach the material to the hat. I wrapped the brim of the hat followed by top of the hat. It was all just simple folding and gluing everything together. All in all it came out great. Everyone liked the outfit and even ran into to Hulk Hogan as well as Hollywood Hogan. Alamocity Comic con was a blast and I can’t wait to make the next Macho Man costume. I’m thinking about making the stars and stripes outfit next.