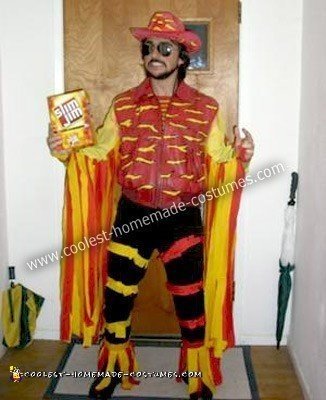 About two months ago I was having a particularly hectic week and I was neglecting my appearance. I stopped shaving altogether and soon I had a substantial beard going. I also had fairly long hair, because for quite some time I had been avoiding getting a haircut.

If I recall correctly, shortly after that same week I overheard a conversation about professional wrestling. I believe my coworkers were talking about Shaquille O’Neal appearing in some matches over the summer, and I started looking up pictures online. When you Google “WWF wrestling” or something similar, you’re likely to come across lots of insane costumes from wrestlers across the years. But it is hard to think of anybody more flamboyant, colorful and confusing than Macho Man Randy Savage, and pictures of him in his various costumes throughout the years stick out like a sore thumb.

Seeing all of the crazy suits he would wear brought back memories of when I was much younger and believed wrestling was real, so I did the natural thing: look him up on YouTube.

The guy was a masterful performer, so intense and unique. On seeing these videos, I was cracking up and started doing Macho Man impressions for my co-workers and friends. I wasn’t bad, and I got a few laughs.

So here was this perfect storm. Me, with long hair and a grizzly-looking beard starting to form, and a new source of inspiration with Halloween coming up. The idea of a Homemade Macho Man Randy Savage Costume clicked in my head and I knew it was a winner. Searching for pre-made costumes came up empty. The closest thing was an authentic Macho Man jacket worn by the man himself, on eBay for hundreds of dollars. No way I can afford that, even if it is an INTENSE, AWESOME idea.

So I knew I had to make my own Homemade Macho Man Randy Savage Costume. I’m not the most creative person, but I know that on things like this what you really need is dedication, and that I have. Over a period of 3 weeks, I searched through over 10 different thrift stores all over California for the pieces I needed.

That’s right, 3/4 of the things I was wearing were woman’s, but hey, look at what the guy wore. Men’s clothes typically aren’t all too tight or colorful these days.

To get all of the supplies I needed, I must have gone to Beverly’s craft store nearly 10 separate times. They would laugh a little when I would walk in, because I had shown them the picture I showed you above. They were extremely helpful and over time I ended up buying:
-2 cans of spray paint, red and yellow (~$20 total)
-Several bottles of red, black and yellow fabric paint (~$10 total)
-60 sq ft of red and yellow fabric (~$15)
-Fabric glue and safety pins (~$5)

I started by hanging my jacket on a branch in a tree in my back yard and painting the base and sleeves of the jacket. The paint held surprisingly well, and I was accurate enough around the sleeves (where the color changes) that I didn’t need to do too much touch-up. At the same time I spray-painted the hat red, running out of paint as I put the last touches on it.

The next day I went to work with the fabric paints. I painted the jacket’s yellow stripes with a brush then did the black outlines with one of those 3D fine-tip paint containers. I wasn’t too meticulous with anything except the lettering on the back and arms. I decided to write “macho” instead of doing more stripes since I wasn’t sure if people would recognize me immediately. And when you put this much time into something, you of course want everybody screaming “Snap into a Slim Jim!” at you. I detailed the hat, as well, then started the streamers the next day.

I cut the fabric myself to save money (ribbon is really expensive per yard). This took a long time and my hands were killing me by the end of it, but it was a labor of love and I didn’t stop until I had fabric-glued every last one on. I set the jacket next to a fan on low and let the streamers dry for the night. In the meantime, I cut smaller streamers to use for the pants. I actually wanted to keep the pants after Halloween was finished, so I used safety pins to hold on all streamers on the pants, including the intense bell-bottom ones at the bottom.

With all this said and done, I needed to add the finishing touch: I ordered a box of 100 snack-sized Slim Jim’s (original flavor, of course) to pass out to passers by. With that, the costume was complete. On Halloween night I got into character and went to parties, downtown, anywhere I could be seen, and I passed out Slim Jim’s to anybody who gave me an “OH YEAH!”. Even though the night was fun, I have to admit that I think I actually had more fun making something I had never seen before, and making it pretty good. The experience of making it was more than half the fun.