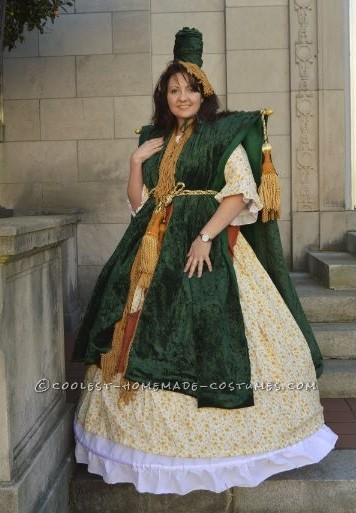 “I just saw it in the window, and I couldn’t resist!”

Holy cow, that has to be one of the funniest moments on TV! EVER! I was in 5th grade when I first saw Carol Burnett’s “Went with the Wind” spoof of “Gone with the Wind.” Her hilarious over-the-top take on a cinema classic stayed with me, and I just knew I HAD to somehow pull it off for Halloween. When I saw her in the curtain dress including the curtain rod, I laughed so hard my mom came running in the room to see what was wrong with me.

Fortunately, my limited sewing skills include being able to sew a straight enough line for curtains and valances. Making the curtains was far easier than I thought. I first made the basic form with green felt to which I sewed green pane velvet (or crushed velvet) over the felt. I wanted to use ‘real’ velvet, but seriously, have you ever seen how crazy expensive it is per yard? Happily, crushed velvet was a fourth of the price (Yay!)

The curtain rod was from a discount linens store that I painted the finials and my husband duct taped the two slide together pieces to the right width. I wondered and wondered how in the world I’d be able to get the curtains to stay up on my shoulders, did I need some kind of shoulder brace or rods stuck down the back of the dress? Then I saw an interview with Bob Mackie (the designer of the original curtain dress Carol used on her show) on YouTube, and he said he had an assistant standing at the top of the stairs that simply lifted the curtains onto Carol’s shoulders and it balanced perfectly. And hallelujah, that worked perfect for me – no fancy rigging required!

The dress and hoops were an eBay find (try as I might, I couldn’t find a dress in the coral floral print like Carol used on the show), and I ordered the bullion fringe and tassels also from eBay. For the rope tassel belt, I wrapped green ribbon along the cording for that added touch (okay, it’s really just OCD, I just had to have matching green in the belt). And truth be told, I also painted the tops of the tassels to a more matching shade of gold (again, OCD).

For her hat, I used a 16 oz. Styrofoam cup left over from a coffee run, that I painted green and then wrapped green velvet around, hot glued the bullion and added velvet ribbon (the only green I could find was olive, so I painted the ribbon with green acrylic paint with fabric medium added –ok, I admit, I’m obsessed!)

A very last-minute addition which isn’t very noticeable, but I was shooting for accuracy, is the stained rust/orange apron. I literally had my oldest daughter stand in the hoops on Halloween morning while I wrapped the length of rust/orangey (is that even a word?) broadcloth around her, sliced at it with scissors till it resembled the photo that I had printed from Google Images. Then I set to hacking more holes in it, and then sponge/finger painted brown acrylic paint to give it a worn/dirty look (I promise, by this time I had taken the apron off my child and freed her from the hoops)

I finished it all with black ankle boots and pantaloons (although not visible, I felt it added to the feel of the ensemble, plus if I took a tumble down the stairs like Carol did in the skit, I’d be covered!)

Surprisingly navigating and driving in hoops wasn’t too bad – they were very flexible, and I was able to put the curtains on myself (I didn’t drive in the curtains). One thing I had to keep in mind was the width of doorways at home and at work, although the hoops squeezed through, I ran into some door frames with the curtain rod and had to turn sideways to get through!

Happily I won the costume contest we have each year at my workplace, and also the homemade costume category for adults at a town-held contest. 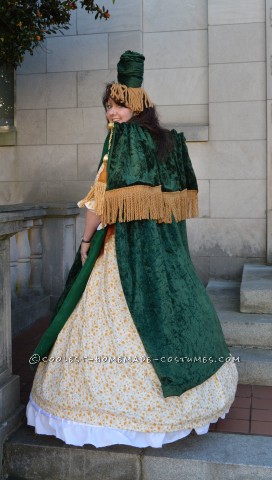 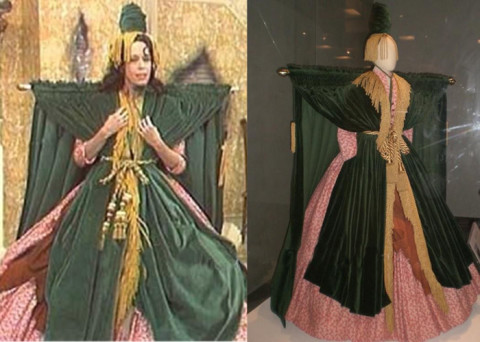